Chill - A Call for Peace in Raptors Nation

Share All sharing options for: Chill - A Call for Peace in Raptors Nation

After watching Raptorsnation go nuts for the past few days after the draft, Vicious D look at the bigger picture and asks us just to take a little step back.

The Raptors are not going to get any better soon.

I made my peace with this last year.  I was fine with the Raptors attempting to go for the playoffs with this year's draft being essentially a crap shoot, and the Dinos needing the experience.

Next year?  I want these Raptors to be bad.  I want Bryan Colangelo to stock up draft picks, hard core-style.   Heck, I think he should have started doing that already.

So the Raptors finished near the bottom of the heap in a bad draft year and drafted a Euro who won't be coming over for a year.  I don't have much of an analysis because unlike most of my colleagues, I've never been a big follower of the draft.

Sure he sounds good.

But Jonas Valanciunas is an unknown commodity.  Just like any pick.  And in a draft where you probably could find a pretty serviceable starter, on a team of "serviceable talent", that doesn't really matter to me.  We need some honest-to-goodness A1 talent and we weren't going to find it in this draft.

When it comes down to it, I've had an actual concern that the Raptors would draft someone who actually would be decent in this year's draft.  And in fact, it was growing into a greater fear with all the talk about bringing over a guy like Brandon Knight or Kemba Walker.  After all "decent" player is what created the 76ers; a middling team without a ton of future.  "Decent" is what Danny Granger gives the Indiana Pacers; a one-in-three shot of making the eighth seed in the playoffs.

"Decent" is what the Raptors have been since the 2006-2007 season.  (Last season aside.)  Decent is what we'll have if we continue to have Andrea Bargnani as is and add a few pieces.

I've done decent and decent doesn't work for me.

So I bet you're wondering, what did I do draft night?

I worked.  I chatted with friends about nonsense.  I put in some more hours into inFamous 2.

And I watched the wildfire ensue after the pick.

What am I going to do today?

I'm going to go outside, enjoy the nice weather, and have a BBQ with some friends. Maybe celebrate a little that the Dallas Mavericks beat the Miami Heat.

Cause the reality of it is, I want the Raptors to be bad next year.  I want us to draft high in a draft that promises to be strong and full of prospects who might actually help out our team.  I want our current draft pick to play in Europe for another year so he gets floor time and a lot more work in the gym and on the court.  I want Jonas Valanciunas to come in with the 2012 draft guys so we essentially have three or more guys coming into the team at the same time to give the Raps an influx of talent.

Oh, and I want to see a shortened season so I that there's less writing for me to do about our bad team. 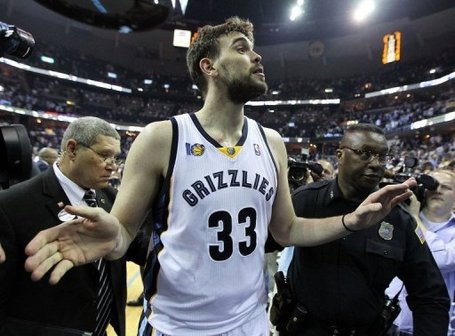