Is Trading Down the Best Possible NBA Draft Outcome for the Raptors?

Share All sharing options for: Is Trading Down the Best Possible NBA Draft Outcome for the Raptors?

The HQ takes another look at yesterday's prospects and talks about perhaps the best possible outcome for Toronto regarding this draft; the team trades down.

The workout that had been scheduled for today was cancelled as we all know, but that doesn't mean there's a shortage of news in Raptorland.

For starters, it sounds like the Raps are closing in on their potential head-coaching choice, the Mavericks' Dwane Casey.

This selection would line up with Colangelo's comments in the wake of Jay Triano's dismissal as Casey has been praised for his defensive-minded approach, as well as possessing prior head coaching experience.

Tom Liston of Raptorsrepublic.com did a great analysis of Casey recently and the verdict came out positive; hire the man.

As well, we've got a draft in six days!

There's still a lot of confusion after the top two picks, but Jonathan Givony of Draftexpress.com, who I'll be speaking with in a few hours incidentally for our annual pre-draft chat, helps clear the air a bit in his latest mock draft for Yahoo Sports.

Right now we've got Kawhi Leonard as our number two choice on the draft board after Brandon Knight, but I'm not so sure the Raps have him there.  Based on Jim Kelly's comments yesterday, it sounds like Toronto has its list of options for the fifth pick narrowed down to about five or six main players, and the recent announcement that the team is cancelling Monday's planned workout may further solidify this idea.

I'd hazard a guess and say that the list includes:

Knight I maintain is their top choice, but it seems more and more likely to me that he'll be gone by the time Toronto picks.  I'm not sure the team is that sold on Kanter or Vesely truthfully, so that leaves Leonard and Walker.

Leonard should have the edge but as Ryan Wolstat pointed out via Twitter yesterday, Raptors scouting guru Jim Kelly operates on the West Coast and therefore has seen Kawhi possibly more than any other prospect.  That sometimes hurts a player's chances as he becomes over-analyzed to death, and in fact Kelly's comment about Leonard shooting the ball yesterday better than expected, felt a bit to me like "been there, done that."

First, he's not a great shooter, especially from long-range, so unless DeMar DeRozan transforms into Ray Allen this off-season, the two aren't a great fit together I'd argue.

Second, as we noted in his breakdown, Kawhi does have some similarities to James Johnson, the player Toronto basically selected late in the upcoming draft, via last year's trade, so will the team take another SF?

It's a tough call, and as Ray Bala notes in his takes on yesterday's workout below, there's no question that Leonard looks like a gamer at the next level:

Leonard is every bit as big as his stats show.  Not only that, he has some giant hands (check this photo I took comparing his hands to that of The Score.com's Holly MacKenzie's) and is incredibly soft spoken.

We got to see a small portion of the drills and he displayed many of the interior game and motor that made him such a successful college player.

He's a tweener though, holding his against Tristan Thompson in the post but getting out-quicked by Tobias Harris in the one-on-one drills.

Leonard did have the best shoes in the gym going with the retro Jordan XIIIs in grey suede.  The second best pair went to Cory for rockin' Adidas Krazy 8s in black and white.

Other notes - Tobias Harris looked a whole lot slimmed down.  Dude looked like he shed a 4 year old from the time he was at Tennessee!  It may just be me but I could swear that he was A LOT bigger as a Vol but in camp he looked more like Amir body wise.

Harris also looked really good in the three point shooting drill.  I didn't see much of Harris this season and even less of him taking treys but he was drilling them at a good clip when I was watching.

Marcus Morris was what I expected except that he kept reminding me of Drew Gooden for some reason.  Oh yeah, because he looked kinda like him.

Tristan Thompson is every bit as athletic as they come.  He looked good in the one-on-one post offense drill.  Not great but definitely solid.  He went at Marcus Morris and scored a couple.  The same against Leonard and Harris.  Thompson was also impressive in the shooting drills knockin' them down at a healthy clip, despite a slightly wonky looking shot. 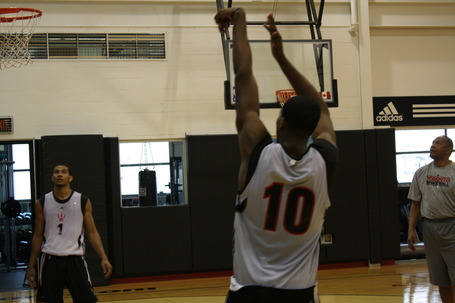 Cory Joseph looks really good as a defender.  He put on Demontez Stitt on lockdown in the one-on-one drill and even got a couple of blocks when I was watching.  That bodes well for him since this is the aspect that will likely tip him into having his name placed beside a team logo come Draft night. 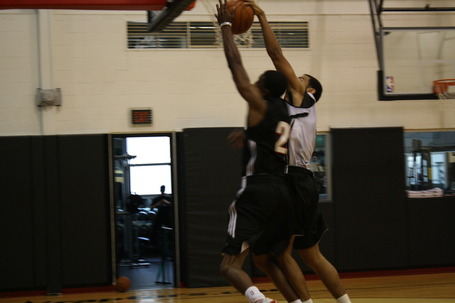 Canada Basketball was well represented at the workout by Senior Men's Coach Leo Rautins and Cadet Men's Coach Roy Rana.  It wass interesting to see both of them there since I don't think we'll be seeing either Tristan or Corey in a Team Canada uniform any time soon.

Finally, the Dynamic Canadian Duo are very, very patient.  There was a lot of buzz around them the entire time and they all took it as it came with a smile.  These kids should be OK when they get to the big media markets they seem destined to get to in a few days. 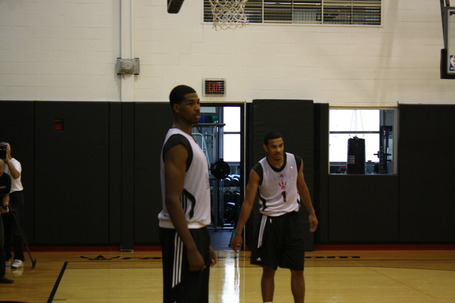 A big thanks to Ray for his take on things, as well as the great live shots.

For me, the decision at five is going to come down to the following situation:

1)  Who from the Walker-Knight, and Valanciunas-Kanter duos is left standing?

2)  Of those duos, are either of the remaining options your top choice, and impact players next year?

In my opinion then the worst case scenario for Colangelo using the previous situation then, is that If Knight goes to Utah at 3, and Kanter to Cleveland at 4, then do you believe in Walker or Valanciunas enough to grab one of them? Of the two I prefer Valanciunas, but the buy-out is a scare, especially with Colangelo on a shorter leash.

Interestingly, based on an ESPN.com Insider article by Chad Ford yesterday, all four players mentioned above, along with Leonard and Vesely, are viewed as "Tier 3 prospects."  Based on Ford's breakdown, this means that while they're not on the same level as Kyrie Irving and Derrick Williams in terms of All-Star potential, the sextet is still viewed by NBA GM's as the best of the rest, and prospects with tremendous NBA potential.

But does that mean Toronto MUST select one from the group at 5?

I hope not, and in reality, for me the best possible situation to come from the upcoming draft is one where Colangelo trades down.  I'm simply not in love with any of the "Tier 3" prospects, even Knight, enough to stand pat, and I'm hoping Colangelo and co. feel the same way.

Teams like Sacramento, Charlotte, Houston, Minnesota, Utah, and Indiana all seem like potential trade partners, some because they have multiple early first-round picks, and if Toronto could come out of this draft with a player who could contribute immediately (say a Chris Singleton or Kenneth Faried), as well as maybe a vet, or high-upside prospect (say a JaJuan Johnson), then I'd be thrilled.

Or even if Colangelo moved the fifth pick to another team, in order to facilitate the trade of um...certain current players, getting a later pick in return, I'd be all for it.

Conversely, trading up wouldn't be such a bad thing either.

That ship might have already sailed but it's hard not to watch videos like this and think that Derrick Williams wouldn't fill a pretty nice hole in the team's starting line-up...