With the arrival of Canadian born Cory Joseph and Tristan Thompson at the ACC yesterday, it was very easy to forget about the other players that auditioned for the Dinos.

The HQ's Sean Tepper was on the scene though, and gives his take on yesterday's event.

With most of the Toronto media focussed on the homecoming of Ontario natives Cory Joseph and Tristan Thompson, it was easy to forget about the other four players that the Toronto Raptors invited to yesterday morning's pre-draft workouts.

Working-out alongside the two high-profile Canucks, was: Clemson guard Demontez Stitt, Kansas forward Marcus Morris, Tennessee forward Tobias Harris, and San Diego State forward Kawhi Leonard, who of the six players in attendance, is the most likely to be taken by the Dinos if they decide to hold onto the fifth overall pick.

"Today was by far our best workout and our most competitive," said Jim Kelly, Toronto's senior director of scouting.

Leonard, who averaged 15.5 points per game (PPG) and 10.6 rebounds per game (RPG), is widely considered to be a top 10 talent and is projected to be taken in the early goings of next week's draft.

While it is unclear as to where exactly he would fit in with the Raptors, Leonard is an extremely aggressive scorer, whose ability to rebound for his size and play solid defence sets him apart from the pack.

"I'm not looking to [be picked high], I just want to get picked and be in the NBA," he said. "I'm just going into each workout, living in the moment and playing hard."

Although he is still quite raw, at 6'7, the former San Diego State Aztec is an agile hybrid forward who relies heavily on his pull-up jump shot to create offence.

Despite concerns of his long and mid-range shooting consistency, Leonard figures to play as either a 2 or a 3 in the NBA.

"I'm just a basketball player. I'm not out there specifically for one position," said Leonard. "I'm going in the post, coming off pin downs, [doing] some catch and shoot and just working on my overall game so that I can be effective at all times."

Another intriguing player that impressed Kelly during the workout was forward Tobias Harris.

Harris, an 18-year-old freshman combo forward who averaged 15.3 PPG and 7.3 RPG as a freshman on a very dysfunctional Tennessee Volunteers team, has recently shot up draft boards due to his consistency, versatility, and high basketball IQ.

"He's probably one of the hottest names out there right now," said Kelly. "[Harris] has changed his body quite a bit and he's lost some weight since he ended last season. He's very mobile, very athletic, [has] got good ball skills and I think that's why you hear his name mentioned as one who's rising up draft boards." 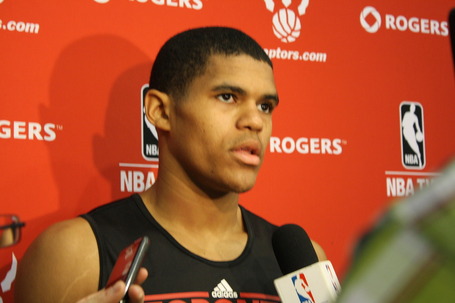 Despite being heralded as smart player with a mature and professional mindset, the main concern that scouts have with Harris is his height. At 6'8, Harris is too small to play power forward in the NBA but he also lacks the athletic ability required to cover small forwards and most guards.

So why is he shooting up everyone's draft board?

"I think it has a lot to do with [scouts] seeing a different part of my game that they didn't get to see in college," he said. "In college I didn't get to show a lot of my perimeter skill, so coming out here now I think I silenced a lot of my [critics]."

While the media only got a chance to see the very end of the workouts (the norm in these agent-controlled processes), Harris' perimeter shooting was on display in a big way as the multipurpose forward was knocking down shot after shot from behind the arc.

Because  Leonard and Harris both figure to play the 3 in the NBA, the Raptors brought in forward Marcus Morris, and Brampton' s own Tristan Thompson to work out as true power forwards.

Although it could be argued that they are a bit undersized at 6'9, both forwards have been praised for their defensive prowess and their rebounding abilities. 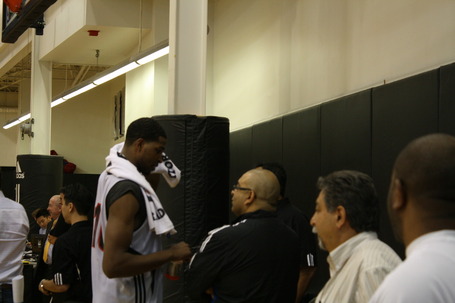 "Coaches I've played for have always said that defence wins championships, so I definitely hang my head on the defensive end," said Thompson, who many believe could be the highest drafted Canadian since Steve Nash was drafted 15th overall by the Phoenix Suns in 1996.

Although many scouts believe that Thompson is a better rebounder and has slightly more potential as a defender, Morris is seen as being more of a threat on offense as he posses excellent form in his jump-shot and is an extremely efficient scorer around the rim.

"I feel like I'm one of those players you could put anywhere on the court because I know the game so well and I know how to play basketball," he said. 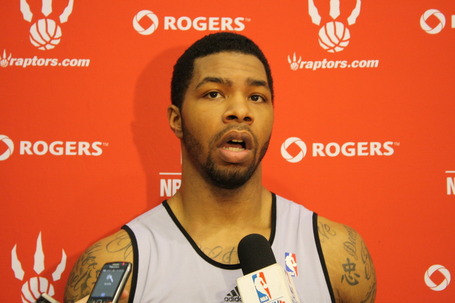 While all of the players mentioned above are projected to go in the early to mid first round, no player received more media attention than Cory Joseph, despite the fact that some experts project the Toronto native to be drafted in the middle of the second round, whereas others project him to go undrafted.

"I'm confident in myself and my ability to go out there, play hard and show them what I've got," said Joseph. "You have to have a plan B but I'm not even thinking about that right now." 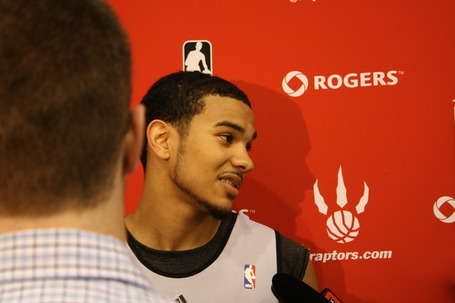 Despite the fact that the 6'3 point guard is said to possess a lot of potential, many critics believe that he would have benefited from a few more years at the University of Texas as his abilities as a floor general remain quite raw.

Regardless of what scouts say about him, Joseph says that it would be an honour to suit up as a Raptor.

"It would mean a whole lot," said the 19-year-old Torontonian. "I grew up here and I've watched the Raptors play ever since I was young. It would be a dream come true."