Taking a page from the Baskteball Jones last year, the HQ looks for some assistance regarding tonight's lottery selection...

It's the annual NBA Draft lottery, a night that could change the fortune's of one or more NBA franchises, and here at the HQ, we're hoping of course that one of them is the Toronto Raptors.

When we did our year-end round table, the votes were pretty split as to what pick the Raps would end up with.

I also surveyed a few more folks and the responses there were all over the place:

Ryan Wolstat - Toronto Sun Basketball Reporter - "Third, because it's the worst spot to be in a two-man draft!"

Random guy seen here, soliciting funds outside of Phoenix Concert Theatre Sunday night - "Let me tell you why I play the lottery, I play to get ricccccccccch!" 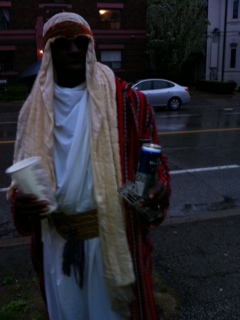 So what's the truth?

Well of course no one really knows, but inspired by The Basketball Jones last year, I decided to reach out to some folks with powers of foresight, greater than most.

Or in this case, I called Psychicsforetell.com and spoke to "Paige..."