How Important is a Top 2 Pick for the Toronto Raptors?

Share All sharing options for: How Important is a Top 2 Pick for the Toronto Raptors?

How crucial is it for the Toronto Raptors to land a top two pick?  The HQ looks at some draft history and breaks it down...

Slice it any way you want but since the 2011 top draft prospects started dropping like flies and heading back to their institutions of "higher learning," there really have been only two names that matter in this draft.

And if you land either Mr. Irving or Mr. Williams, the road for your NBA franchise suddenly becomes paved with gold right?

A recent SB Nation article examining draft picks did positively correlate being a top pick with the NBA's Rookie of the Year award.  Here's the chart from said piece done by Tom Ziller: 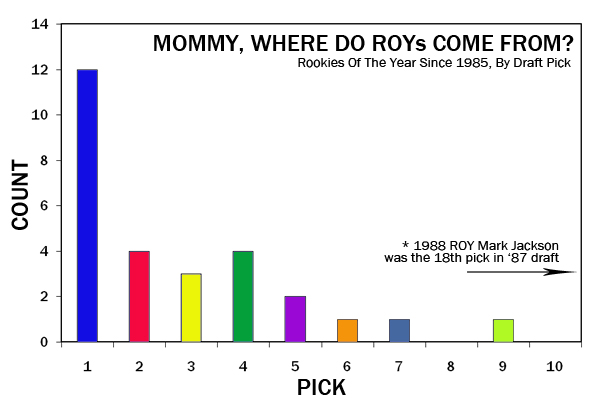 As you can see, if you draft in the top 4, even 5 spots, you get a pretty sure thing in terms of success in the league the following season.  In fact Ziller points out that 23 of the last 29 rookies of the year came from the top four picks, and 12 of those 29 were the top pick overall.

Going back to the Raps then, if they do land a Williams or Irving, chances are they end up with an impact player in year one.

Looking back at the NBA's rookie of the year award winners since 1991, there are no doubt some franchise players and Hall of Famers.

But there are also the likes of Emeka Okafor, Mike Miller, Steve Francis and Derrick Coleman.

Solid players yes, but the best players from their respective draft classes when all was said and done?  Not so much. Those titles would belong to Dwight Howard, Jamal Crawford, Manu Ginobili and Gary Payton.

Linking back to the Toronto Raptors then, history shows that a top two pick would indeed give Toronto a very solid piece in their overall puzzle.  But it doesn't guarantee someone who changes the course of your franchise, hence the "maybe."  Rookies of the year are great, but as noted, that award is more of a first-year gauge then long-term success marker.

Let's throw another wrench into things.

As we've seen in the past, a draft's overall strength can vary quite largely from year to year.

The 1996 draft, my favourite of all time, was loaded thanks to a perfect combination of talented college players, still-eligible high school studs, and a still-unmined batch of European youngsters.  As a result, college stars like Allen Iverson, Marcus Camby and Ray Allen were no-brainers as picks, but lesser known prospects like high schooler Kobe Bryant, and international picks like Peja Stojakovic and Zydrunas Ilgauskas also gave teams great building blocks.

In contrast, the 2000 draft is one of the worst, if not THE worst draft of all time.

Names like Stromile Swift, Darius Miles, Chris Mihm and Marcus Fizer were called early in the lottery and the entire draft class has only produced a total of three All-Star appearances.

So really it's all relative.

A top two pick for the Raptors this year might provide the team with the best of what's in reality a mediocre group of prospects, so in that sense, one could argue that in some draft years, getting one of those top spots isn't as important.

However the overall level of talent from draft to draft is beyond a team's control and you simply have to do the best job with what's in front of you.  History shows that beyond Rookie of the Year, a top pick, or even a top two pick, vastly out-performs his draft counterparts over the course of his career.  ESPN.com a couple years back took a statistical look at this in what they termed their "D.R.A.F.T. Initiative," and discovered that the number one pick had an "Estimated Wins Average" of nearly 10 wins. Estimated Wins Average, or EWA, is a metric developed by John Hollinger which looks at "how many wins a player adds to his team's record compared to someone you could sign to a 10-day contract" (ie - a replacement-level player). "Basically, the metric combines player efficiency rating (how efficient a player is on a per-minute basis) with playing time and comparative value."

The second overall pick in that same study had an EWA of 6.4 so again, another pretty strong future contributor.

Sure, the top two picks could end up being Kwame Brown and Danny Ferry (historically low EWA scores at these draft spots), but overall, the facts are as follows; grab a top two spot and you're getting the cream of the crop prospect-wise.

For the Raptors, this means there's good reason to have the names Kyrie Irving and Derrick Williams looping over and over.  The consensus top two have the best chance at not only being impact players and ROY candidates in year one, but also the best players from their draft classes and impact prospects for the teams that get a hold of them.

I'd argue then that for this reason, it's quite important to get into those top two spots come next Tuesday.

That being said, the same study by ESPN.com showed that there's not much difference in terms of average wins between the second pick (EWA of 6.4) and the next three picks, with EWA's of 6.2, 6.1 and 6.1.

Of course on a yearly basis that can differ quite a bit, but history has revealed that if you're drafting in that top five spot, you've got a great shot at a very good player.

This year could be a great example of this in fact as while Derrick Williams looks pretty good based on his college career, no one originally was touting him as the second coming of LeBron James.  In fact some of the mystery European prospects could end up becoming better NBA players than Williams when all is said and done, so I'm not sure it's the end of the world should the Raptors stay in the third spot, or even drop a position or two.

To me, getting a top two pick is the "safer bet" certainly, but I won't be jumping off a bridge should the Raptors' logo emerge from the fifth, fourth or third-place envelope next Tuesday.

However there is one scenario I'd really like to avoid.

While very unlikely, it's possible that three teams leap-frog the Raptors, Cavs and Wolves pushing these clubs into the sixth, fifth and fourth draft spots respectively.  It happened in 2007 where the Celtics, Bucks and Grizzlies had the best shots at the top pick and none finished in the top three.

Why do I desperately want the DInos to avoid such a scenario?

Because history shows that the drop-off between the fifth and sixth pick is akin to taking a step out of an airplane at 50,000 feet.

As noted, ESPN.com's D.R.A.F.T. initiative showed that the fifth pick historically had an EWA of 6.1.

The sixth pick historically has an EWA of 1.9.

Go through the names and you'll see that there are a lot more Dajuan Wagner's taken at six than Brandon Roy's.

Again, this doesn't mean for certain that Toronto can't get the best player out of the draft at 6 when all is said and done should this scenario unfold.  In 1997 the team grabbed Tracy McGrady outside of the top 5 in a draft that after Tim Duncan, had very little to offer.

History isn't on the team's side though so if I'm Bryan Colangelo, I'm crossing my fingers that when those top two envelopes are opened next Tuesday night, that smiling Raptor emerges from one of them.