The Argument Against A Colangelo Extension

Share All sharing options for: The Argument Against A Colangelo Extension

Chris Bosh rolls in and out of Toronto for the first time this season, MLSE is about to meet up with Bryan Colangelo to discuss his contract extension.  Perhaps it's just the universe being in harmony, but the entire scenario is just dripping with irony.  Vicious D looks at the many reasons why Colangelo must go.

It's now All Star Weekend and all eyes turn towards the NBA mid-season spectacle.  Our own hometown hopes seem to reside in DeMar DeRozan putting the Raptors a little more "on the map" for the future.

For myself, this weekend is usually a great time to go back and take stock of the NBA.  It's a good time to see how David Stern sees the future, how the Raptors Management will look to improve our team before the deadline, and how our current team's direction will be for the rest of the year.

Of course, the Miami Heat coming into town just before the break was a pretty amusing way to cap the first part of the season.  Chris Bosh's return really seemed to remind me of one thing.

For the first time in a long time, the Raptors will not have a representative at the All-Star Game.

Yes, yes, I know that DeRozan will be there dunking it off, but at the actual game?

And to be honest, is there anyone on this current Raptors roster that I can say will be a constant part of the All-Star Game in the near future?

Yeah, that thought gives me the shivers too.

So with all that as a backdrop, I find it extremely hard for us to support a Bryan Colangelo extension.  We've by now, heard the stories that have started coming out of MLSE that it's time to begin thinking about Colangelo's future.  We've even heard from Eric Smith expounding the needs and reasons to keep "The Legomaster" on board.

Which has left me wondering what kind of Kool-aid everyone's been drinking and just how expensive a glass of it might be?

So here are the points that I've heard the Colangelo loyalists bring up:

It wasn't his fault that his free agent signings didn't pan out.  After all, no one could see it coming.

Chris Bosh chose to leave and it's his fault the Raptors are in this predicament that they're in now.

There's nobody better out there to run the Raptors.

It's a lot to cover, but I just don't see eye-to-eye with the apologists in any of these four categories.  I will admit that Bryan Colangelo managed to catch lightning in a bottle in his first year of the Raptors, but in his subsequent tenure, he's been far from effective.

Firstly: It wasn't his fault that his free agent signings didn't pan out.  After all, no one could see it coming.

This is really going to be about exorcising the three ghosts of Colangelo's past.  Jason Kapono definitely capitalized on his shooting ability and his work in the Miami system.  However, Colangelo seemed to forgot that he didn't draft a center who commands a presence around a basket; a key ingredient in making Kapono a gifted scorer.

Jermaine O'Neal was a guy who had a history of injury issues, who had a massive contract.  Need I say more?

And Hedo Turkoglu, was a player who no one could see that he may not be as effective in Toronto as he was in Orlando or Sacramento.  Except Turkoglu also had a stinker of a year in San Antonio, and Colangelo's own reasoning for choosing him (best Free Agent signing available rather than best fit) should explain it all.

A great GM is supposed to be forward-thinking and almost clairvoyant because they are supposed to be more well informed than the general public.  In all of these moves, Colangelo showed none of this trait.

I hate to say it, but on the surface, this is a pretty compelling argument.  The Raptors definitely need someone to sell to the public, and let's not mince words, MLSE needs someone to drum up corporate dollars every year.  It's corporations which pay a lucrative amount for a luxury box, and it's corporations who pay out money to have their logo splashed all over the ACC.

But here's where that argument falls flat.

Will crowds continue to go to games if the Raptors are horrible and losing?    If crowds don't go and interest on TV lessens, what will happen to those sponsorship dollars? Who will want to be seen with a team which can't win?

Because no matter how much of a face Colangelo is for the Raptors, the more important need is for the Raptors to be fun and competitive.  That's how you attract buzz to the city and gain better sponsorships, and that's how teams have been successful in Toronto in the past.

Third of all: Chris Bosh chose to leave and it's his fault the Raptors are in this predicament that they're in now.

This is all going to become a chicken and egg thing.

Did Colangelo mismanage the Raptors which led to a discontented Chris Bosh who wanted to go to a team which was going to win now?  Did Chris Bosh make up his mind a long time ago and there was nothing that Bryan Colangelo and the Raptors could do to change his mind?

How you feel about Colangelo's and Bosh's responsibility in the matter is going to greatly shape who you think should be held accountable for the Raptors' lack of a star player.  However, keep in mind that the Raptors had four years to make an impression on Chris Bosh and failed miserably at it.

I mean, if I was MLSE and I had a list of goals for my basketball GM, re-signing your best player just might top that list.

And finally: There's nobody better out there to run the Raptors.

This is definitely not true.  In fact, one person is out there who I definitely would love the Raptors to make a play after who's looking for a job after bringing back the Blazers from a haze of shame. 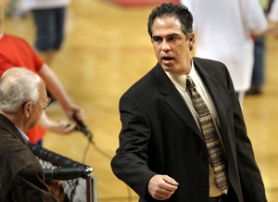 Kevin Pritchard is a lot of things.  He's managed to draft smartly to get Portland where it is.  He's a man who has a lot of face recognition for what he's done in Portland, and he's also available.

One very big thing I'm glad he's not, is that he's got no attachment to our current roster.

While I don't believe that the Raptors need to keep on making wholesale changed until the roster clicks, I believe that a fresh pair of eyes sorting through our assets is much needed.  You get the feeling that Kevin Pritchard would rid himself of certain players because they've been fairly inefficient and make way for some more draft picks.  I'm just not sure if Colangelo has the stomach to do the same.

At the end of all this analysis though, there's a simple question I've been contemplating.

Do I think it matters that the successful year was his first and not his last?

To me, the answer is simple.  Definitely.

The Raptors now have to start from scratch and build something using their salary cap room and their flexibility; much like when Colangelo entered into the job four years ago (minus the All-Star player of course).  However, if his most successful year was the final  year of his contract, we would be rewarding Colangelo for putting together a successful campaign run.  Instead, we seem to just be searching for reasons to let him stay.

And if that's the case, it's a good sign that Colangelo has worn out his welcome.