Who Will be the 2011 "Lockout Shawn Kemp" for the Toronto Raptors?

Share All sharing options for: Who Will be the 2011 "Lockout Shawn Kemp" for the Toronto Raptors?

Shawn Kemp reportedly put on 34 pounds during the last NBA lock-out.  The HQ looks at three Raptors who could follow suit...

And there go another two weeks.

Well at least that's the way it sounds.

Reports last night indicated that another 102 games will be cancelled today by the NBA, putting us likely into mid December now, in terms of the earliest a season could start.

Of course this has all sorts of negative connotations associated with it, many of which we've discussed from a Raptors' perspective already.  Concerns over impact on next spring's draft, lack of player-coach cohesion, setting back Toronto's rebuilding efforts, etc, etc.

But what about the impact on individual players?

Sure, there's been a whole marketing effort around #basketballneverstops, but for many players, I'd hazard a guess that basketball has stopped, and unfortunately this extended off-season has simply been an excuse to have some more of Mom's home cooking.

The National Post's Bruce Arthur asked who this lock-out's Shawn Kemp would be when the NBA cancelled its first bunch of games, and The Basketball Jones did one better by putting together a list of potential candidates and their odds to fill the Reign Man's shoes.

Luckily there was nary a Raptor to be found on said list, but that doesn't mean we can't see some of the Dinos coming back looking a bit more like Brachiosauruses than a Velociraptors.

3.  Linas Kleiza.  Kieiza's an easy pick.  If you're rehabbing a serious injury like Linas has been over the past while, many of you know from experience how easy it is to pack on the pounds.  You just can't do very much, and maybe you even feel sorry for yourself and turn to the old KFC or Mickey D's to drown or in the case of your arteries, clog your sorrows.

No word on whether Kleiza has done this, but I expect between a lack of activity thanks to microfracture knee surgery, and the absence of formal Raptors' rehab sessions, "TV L" is going to need a major conditioning stint when NBA basketball returns.

2.  Andrea Bargnani.  Poor Andrea.  Even in a post that has nothing to do with advanced stats, Bargs gets the short end of the stick.

However the fact remains that he's not exactly the "White Dwight Howard," tends to suffer from strange injuries as is, and of course, there have been rumours in the past about him not reporting to camp in the best of shape.

Oh, and there's this photo, taken pretty soon after the season was done: 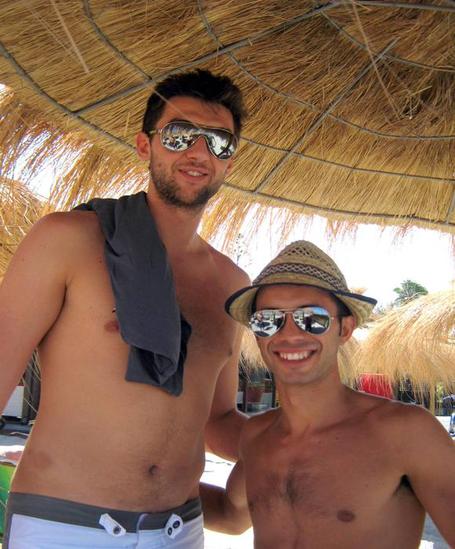 1.  James Johnson:  Normally you wouldn't say that a basketball player who's focusing like this in the gym (1:34 mark), is an NBA team's top candidate to put on the pounds.

Add in the fact that he's a black belt with MMA experience and your first instinct would be to scoff at his inclusion on this list.

But Johnson just seems to have that body type that if left to his own devices, could become a shorter version of Eddy Curry.

Johnson after all had a 12% body fat mark upon entering the league, and while he was no Oliver Miller (22%), that body fat percentage ranked him alongside combine results for guys like DeJuan Blair and um...Shaq.

Least likely to put on pounds:  There are probably a few options here from Solomon Alabi to Leandro Barbosa.

But DeMar DeRozan takes the cake.  He's consistently been firing out tweets like:

DeMar_DeRozan DeMar DeRozan If I don't do nothing i'ma Ball...

And yes, as part of the #Basketballneverstops movement, he's been playing in leagues and open runs all over the place, keeping an intense gym schedule to boot, something he recently discussed with the National Post's Eric Koreen:

DeMar DeRozan: I get up. I work out in the morning. Monday, Wednesday, Friday, I work out twice a day. Tuesdays, Thursdays and on the weekend, I play with the pros. We have open runs. That's my week. I do that every week . We go to [Loyola Marymount University] that's out here. There are 10 or 15 pros. We just play games all day.

This of course doesn't mean that when/if the NBA season gets going again, DeMar's going to morph into Kobe Bryant.  (Regardless of what Bryan Colangelo may think.)

But it's welcome news for Raptors' fans sorely looking for something positive leading up to another potential long season filled with many losses.

Now if DeMar could just give James Johnson a call...