Share All sharing options for: 3 In The Key: Toronto Raptors Game Day Preview vs. Milwaukee Bucks

It's fan night at the ACC and it couldn't come at a better time as management needs to draw the attention away from a team crippled by injury and in the midst of a 9 game losing streak.

Tonight's opponent? Another team that has been decimated by injury this season - the Milwaukee Bucks. 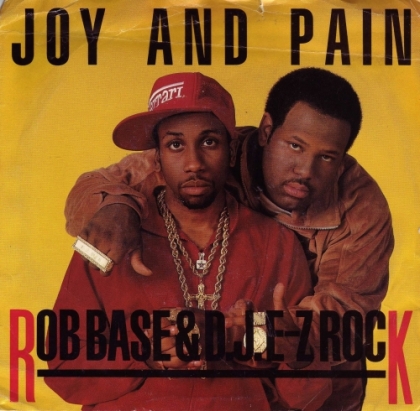 Is there a better way to sum up how fans feel about this year's Raptors squad?

Sure there has been a lot of pain thus far as the team has managed to put together just 13 wins and at times it has been downright ugly. On the flip side fans have enjoyed watching DeMar DeRozan emerge as a true scoring threat and there is light at the end of the tunnel as young guys are getting lots of burn and a high lottery pick seems to be in the teams future.

The reference to joy and pain is also fitting as at tonight's game the half time show will be none other than Rob Base.

I can't help but wonder if all those who walk through the gates tonight will have to climb into a time machine to go back a decade or so to a time when this would actually be a draw for people. Desperate times call for desperate measures right?

Take an objective look at the 76ers game and who played. Not even 24 hours had gone by since their arrival to the team and both Alexis Ajinca and Trey Johnson were inserted into the game knowing virtually none of the offensive or defensive plays/systems. Not to over simplify things but no kidding the Raptors lost.

The injury bug has hit the team hard and given the players logging heavy minutes it's not all that surprising that the Raptors are struggling mightily and have only managed 2 wins all month.

Of course in the NBA you will get no pity from your opponents. In particular when your opponent has also suffered through a myriad of injuries. The Bucks, after finishing last season strong, have struggled this season as players who are not rotation guys have been asked to play significant minutes at times. Andrew Bogut has been in and out of the line-up, Brandon Jennings is out with a broken foot, Carlos Delfino has missed a number of games and the list goes on.

To get a better sense of tonight's opponent for the Raps we reached out to Frank at Brewhoop.com for the latest.

RHQ: After such a late season surge last season it feels like the Bucks have fallen off the radar. Can their lack of success this season be attributed solely to the injury bug?

Brewhoop: I wouldn't say it's the sole reason, but it's certainly a big part of it. Last year's team was generally pretty healthy, had very good chemistry, and really hit their stride down the stretch (22-8 over their last 30 games), so winning 46 games and almost knocking out the Hawks sans Bogut was both a really pleasant surprise and the trigger for increased expectations. You'd certainly expect that good health had a fair bit to do with the Bucks becoming more cohesive as the year progressed, and they also got career-years from Bogut, Salmons, and Luke Ridnour. Those expectations and the desire to take another step forward were the main reasons for spending big dollars on vets like Salmons and Drew Gooden, but obviously that hasn't panned out the way the Bucks envisioned.

The injuries have made it difficult to get consistent rotations, while Bogut has been less than 100% all year even though he's only missed seven games. The issues with his elbow and hand have been fairly well-documented, but he's also missed time with back issues and has been slowed for the past month with a blood infection for which he's now taking antibiotics. While he's still been a huge presence defensively, his confidence has often looked shot on the offensive end, which is a big blow for a team that has struggled mightily to score points and doesn't have any other post scorers. Meanwhile, Salmons missed all of camp with a knee injury, and with the exception of a few games here and there has yet to look like the Bucks' go-to-guy from last spring.  Some of that might be old age, but the injury is probably part of it as well.

Given the injuries and the Bucks' tough schedule to open the year, you could make a good case that their record is about where it should be, but I think the team's almost mind-boggling struggles on offense have obscured some of the legitimate excuses as well. While Jennings has improved marginally upon his rookie year, almost everyone else has gotten noticeably worse at putting the ball in the hoop, even younger guys like Ersan Ilyasova and Luc Mbah a Moute. There really isn't anyone on the team that can be counted on to give you 15 points on a respectable percentage most nights, though Maggette has looked like he could be that guy of late.

RHQ:If and when the players get healthy is the goal a play-off spot or are Bucks fans thinking about the future and a possible lottery pick?

Brewhoop: The season started with such high expectations that I don't think fans really want to think about the lottery at this point, especially with Jennings expected back on Saturday, Delfino returning to the lineup last week, and the team still just two games out of the 7th spot. Of course, I'm not sure if squeaking into the playoffs and getting rocked by the Celtics or Heat really helps that much in the long term, but the Bucks always seem to find themselves in the awkward position of being too good to get a superstar in the draft but not good enough to do real damage in the playoffs.

That said, they're solidly positioned to snag the 7th or 8th seed because they're in the East, their schedule is relatively light the rest of the way, and they look like they're finally getting somewhat healthy. It's probably not fair to expect a similarly scorching finish like last season, but their defense and effort have been consistent all year, so you could certainly see them turning things around a bit if guys get healthy and they gain some confidence offensively.

RHQ:What are the keys to a Bucks victory against the Raptors?

Brewhoop: The Bucks' defense has been their saving grace all season, so it's typically their ability to make jumpers which determines whether they win or lose. Against the Hawks they started making shots, their defense turned the screws, and they were able to post a rare fourth quarter comeback win over the best road team in the league.

In years past it's always been important for the Bucks to establish Bogut against Bargnani and whoever else the Raptors had down low, but at the moment it seems like Bogut has struggled to score regardless of who he's facing. Still, I'd expect they'll go to Bogut early to try to get him going, with the hope that it opens up opportunities for guys like Delfino to get open looks from the outside.  Beyond that, the Bucks usually need one of their slashers (usually Maggette of late, sometimes CD-R) to put some pressure on the defense off the dribble. Defensively the Bucks do well clogging the lane and Bogut continues to lead the league in blocks, so they typically try to force teams to beat them with the jump shot or by getting out in transition.

Great answers! They also make me realize just how different the Bucks and Raptors are.

1. Bargnani vs. Bogut: The battle of two former No. 1's (neither of whom is a franchise guy), both playing the 5 and with completely different games. This will be very interesting to watch. Will Bargnani be willing to bang with Bogut? Will Bogut e willing to step outside to defend Bargnani? To me this match-up is going to be the one to depict the outcome. Bogut, although not the most skilled big man, doesn't back down from anyone so Bargnani is going to have to show some toughness tonight both physically and mentally. If Il Mago doesn't bring some fire....actually for now let's just hope he does.

2. Zone or not to Zone: It will be a hard decision for Coach Triano on how to defend the Bucks. Milwaukee has below average shooters and you want to force them to beat you from the outside (usually in favour of a zone) but as we have seen over the past few nights, the zone is only as good as it's weakest member. It will be downright embarassing if Drew Gooden or Ilyasova have monster nights. The Raptors have to show some interior toughness. Hopefully the Raps can get the same effort out of Amir Johnson as they did against the Grizzlies because the effort against the 76ers left a whole lot to be desired.

3. Play off the Crowd: Given it is fan night and a Friday you would think that there will be more fans at this game than at the past two. The Raptors need a quick start to get the fans into the game and ride the momentum to a much needed W. We are entering a dangerous time where as the losses mount the more and more likely the fan base either (i) doesn't show up at games, and/or (ii) turns on the home team. Here is hoping neither of those things happen. A win at home would help with preventing that.