Share All sharing options for: Homegrown Talent: Shooting the Rock with Shad

RaptorsHQ recently got a chance to have a sit down, OK more like a phone interview, with a great Canadian Master of Ceremonies Shad.  We shoot the rock on his new album, touring and his favorite sport ... basketball.  Check out our interview with this incredible musician right here ...

If you don't know who Shad is, then you may need to get on it now.

An HQ favorite since he dropped "The Old Prince" a little while ago, the man who once rapped about "ballin' like Tim Duncan, callin' bank," has since dropped his latest offering, TSOL, which is drawing critical acclaim for it's rich sounds and witty wordplay.  In fact the album recently made the short-list for Canada's prestigious Polaris Music Prize, his second nomination in the last three years.

As one of our favourite artists (before we moved to SB Nation, we actually talked to Shad about providing a musical intro for the new site we had been building) it's been great to see the success of his new album, and we were delighted to get a chance to loop back with him recently.

To that end, the HQ and Can Ball Report's Ray Bala goes one-one-one with the London, ON born, Van-City resident MC and talks about his new album, this edjemacation thing and of course, basketball.

RaptorsHQ:  First of all, congrats on putting out the new album TSOL.  I got a chance to check it out a few days ago and I’m lovin’ it, especially Rose Garden and that video for it which was crazy!  Can you give us an idea of the album.

Shad:  Yeah.  The album, I think it’s not too much of a departure of what I’ve done in the past.  It’s pretty similar.  Stylistically I tried to make it a little more upbeat, a little more kind of lush musically and hopefully just better.

Shad:  I think in both instances, just a little more layers to it, you know, so people can hopefully appreciate it on one or two levels.  Hopefully there’s just more there for people to appreciate.

HQ:  In doing that, did you find this album more difficult or taxing to make?  Or was it more freeing?

Shad:  Well what happened is kinda like, making an album gets a little easier for me but then I try to up the degree of difficulty.  So it stays the same range as far as staying the same challenge that is and make it better hopefully.

HQ:  On this album, what songs do you think were the most fun to make?

Shad:  "Rose Garden" was definitely fun, "Yaa I Get It" was fun, "Call Waiting (Interlude)" was fun.  I think the ones that lyrically went in a lot of directions and were the most playful (lyrically) were the most fun to make.

HQ:  So what was the most challenging song to crank out for you?

Shad:  The most challenging I’d say was "We, Myself and I" ‘cause it’s based around this rock sample and rock and hip-hop can be either good or be a little bit skitty so it was kinda hard toeing that line.

HQ:  Now you’ve been on tour for a minute right?

Shad:  Yeah, yeah.  The whole last couple of months have been sort of on the road or on and off the road in pretty short intervals.

HQ:  And how was touring?

Shad:  It was great.  The first part of the tour was from mid May to about early June (from Victoria to Montreal) and then we just did some (music) festivals in Ontario and one in New York.  The shows were a lot of fun.  It was a great feeling to see people come out to the shows in a place like Saskatoon, where you don’t know if people are interested in your music, enjoy themselves and have a lot of fun.

It’s interesting.  I think now with the internet, you find those pockets of people in every town even if it’s a smaller town.  Like Regina, there’s hip-hop fans there and they come out (and they support the music.)

HQ:  Now I happened to see you doing an interview on OTA Live and I heard a mention that you not only have a business degree but you’re also pursuing a Master’s Degree. How do you balance doing that with your music?

Shad:  Well, I just take it semester by semester.  If it's looking like it’s going to be busy then I’ll take the time off.  It’s great.  I like my classes so it’s not hard for me.  It’s something I enjoy just like music.  When stuff gets too busy I don’t commit.  Really the only hard thing is that I’m really in school more than four months in a year so it’s kinda hard for me to get in that zone academically because music is my priority so I commit most of my focus to that so when I have time for school I do it.  School suffers more than anything else because I can’t into that zone fully but I enjoy it. 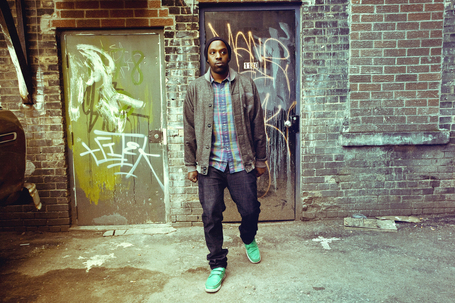 HQ:  So outside of school and music, I understand that you have a love for basketball.  Now where does this come from?

Shad:  I’ve played basketball since I was nine or ten and I’ve always love the game.  I’m a long time fan.

HQ:  So with that in mind, I have to hit you up with the "favorite team" question?

Shad:  I never really had a favorite team.  I’ve always been a guy that follows players more.  I try to cheer for the Raptors but it’s hard, you know?  (I chuckled at that one quite a bit)

HQ:  Who were among your favorite players?

Shad:  I was a huge John Stockton fan!  His stats obviously speak for themselves.  He was a top player, a top leader and exceptionally talented.  I played guard in high school and I always admired great guards.  I am fan of his whole career.

HQ:  Do you still play now?

Shad:  I didn’t play a lot after high school but just got back into playing the last couple of years to try and exercise and it’s the only exercise I like.

I love the game, I love playing, I love running around and also the interaction with people that comes from playing.  Like if I go on the road for two, three weeks and I’m eating McDonald’s everyday it’s nice to be able to do something active every once in a while.  I still like playing.  It’s fun to get some of your skills back.

HQ:  What would be your best skill on the floor?

Shad:  I was never really the most talented player but I’ve played the game for a long time.   I know the game so I can shoot, pass and dribble.

HQ:  So you’re one of these fundamentally sound guys, kinda like a Tim Duncan in a guard form.

Shad:  (Laughing)  Yeah, maybe not a Tim Duncan but at best that would be a generous statement.

HQ:  With the NBA in mind, what are your thoughts on the Miami situation?

Shad:  At first, my only objection to it was that I thought it was boring.  If pro athletes are good for something, they’re there for entertainment, just like musicians.  Entertainment and inspiration, that’s what they’re there for.  Having all these good players on one team, how is that even entertaining?  If they win by 40, that’s entertaining.  If they lose that’s entertaining.  If they just win by something like five, then that’s boring, you know.  There’s nothing interesting about that.  That was my only objection to that.

At the same time maybe LeBron will have a whole other kind of legacy, you know.  He won’t have a Jordan type of legacy which I think disappointed a lot of people, it disappointed me.  Maybe he’ll have a different kind of legacy where he’ll be the first player to grab 25 rebounds one night and then have 20 assists the next depending on what the team requires.  Who knows?  As a long time Kobe hater, I was hoping he would be the guy to overtake Kobe.

HQ:  Now with the other two parts of the Miami deal, who do you think will play the third wheel on that bicycle?

Shad:  I think it’s gonna be Bosh but it all depends on what the other pieces are but he’ll still be the third option.  They’re gonna want to get the ball in the hands of LeBron and at the same time Wade is still the guy there.

HQ:  Now have you been following the Bosh leaving Toronto situation?

HQ:  Do you think that this "Super Team" is the wave of the NBA future?

Shad:  I think so.  I’m not necessarily a believer of the superstar team thing, I still believe in teams sticking together and being successful.  People forget that the Spurs won four championships and that was a function of one coach staying in the same place with a core group of players.  That’s still really effective and I think the (current) NBA has abandoned that (ideal), and that’s too bad.  I think it makes the league more interesting for one thing and secondly it leads to better teams.  Now with that being said, with the talent level in the NBA right now, you gotta have a serious team to compete.

HQ:  Well Shad, thanks for taking the time to speak to us and best of luck with your new album and you reclaimed jumper.

Big shout to Shad's manager Kat Stewart and Gaurav Sawhney at The Faculty Of for getting this chat together.  And be sure to check out our man Shad’s  new album TSOL out in stores and online retailers now and peep his site www.shadk.com where you can keep up with all the latest info on him, his tour dates and interviews.  Speaking of touring, he’ll be on the road with K’Naan in September and October for some Canadian dates and then he heads out to the US with K-os for the rest of October.  Holla at him!