To Boldly Go Where No Raptors’ GM Has Gone Before - Revisited

Share All sharing options for: To Boldly Go Where No Raptors’ GM Has Gone Before - Revisited

Franchise takes a look back to last summer, when he worried about the Raptors' "red-shirts," that is, their lack of bench depth.  Now it seems, the reverse problem may be true...

Some of you may recall last summer when I compared Toronto's then-bench-crew of Roko, Nathan Jawai, Quincy Douby and co. to the red-shirted security team from the old school Star Trek episodes.

Aka...you knew as soon as any guy in a red shirt beamed down to the planet with Kirk and crew...he was done:

At the time, I worried that no matter what changes were made to the starting line-up, the bench, which had been such a weakness the previous season, was bound to let the team down again, and again.

However as we now know, a funny thing happened; the bench became one of the team's key strengths, to the point that outside of Chris Bosh, it was really hard to determine just who should be starting on a consistent basis!

So what about this off-season?

Keeping with the Star Trek analogy, I suppose the first thing that needs to be acknowledged is that the team's Captain Kirk, Chris Bosh, is gone to help lead another starship, leaving Spock, Dr. McCoy or gulp...Scottie to lead the USS Toronto Raptor.

Before we can even discuss bench issues, I think this is something that needs to be touched on.  Because last season, minus Bosh, the club floundered looking quite lost without their leader and go-to guy.

Who replaces Bosh in that department?

I'd say the best candidate would be Jarrett Jack, however isn't that a bit like letting Sulu have control of the bridge?

My worry is that there is no Spock, McCoy or even Scottie on this club at present; and the team has a number of bench players who aren't that much worse than their starting brethren,  I think even with Bosh we saw far too much proof of this last season and therefore I'm wondering without Bosh, how this situation will improve at all.  In all likelihood, it will be worse.

Watching the Phoenix Suns during their playoff run last spring made me re-think this whole issue of "starters vs bench strength."   For those who watched those matches you saw how important both were as the Suns' starters got Phoenix back in many a game, however it was the bench advantage that allowed them to pull away from the Lakers for good in their wins.

We didn't see that sort of balance from the Raps last year and in fact most of the time, the starters would get themselves in a hole only to have the bench try and dig the team out.  This is evident by looking at Teamrankings.com's list of quarter by quarter scoring.  The Raptors' starters averaged 26.5 points per first Q last season, good for 9th best in the L, however ranked third in the league in second-quarter scoring, with 27.3 point on average.

While that doesn't look to be a big jump, think about this for a second.

Most teams saw decreases in average scoring from first to second quarter, presumably because coaches rested many of their best scorers during the bulk of that time.

Toronto not only kept on par with its first quarter production, but surpassed it!

Things really got interesting in the second half as scoring failed to match production in either the first or second quarter, a trend that echoed how many a loss occurred last season.  The starters would surrender leads or get blown out in the third quarter, and a random rag-tag inconsistent mix of bench and starters would try to salvage a game in the fourth. 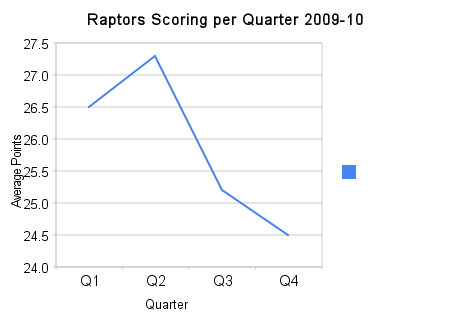 It's pretty tough to win a good chunk of your matches when you get production like that.  There just aren't many NBA games won in the second quarter.

Unfortunately, I'm not sure how that's going to change this coming season.  Two starters are gone, replaced with in all probability, bench folks.  It's anyone's guess who the starting five will even be in fact as aside from Andrea Bargnani and possibly DeMar DeRozan, the rest is pretty open.  It really could be "start by committee" as Weems, Johnson, Calderon, Jack, Barbosa, Kleiza and maybe even Davis could be vying for starting spots.

Last year that was hardly the case as the top 5 were pretty much set from the jump, although 25 games into the season many of us had started to beg for Hedo and DeMar's demotions.  And unlike the 2008-09 season where the Raptors were constantly sending Roko and crew out to be crushed by opponents, last year's bench fared pretty well and most of the time were tough to separate from the starters in terms of production.

More importantly though, who closes out the games?  Most teams finish strong with either their starting group, or the majority of that group with one specific player mixed in because of the offensive or defensive intangibles they provide.

For the Raptors next year?

Your guess is as good as mine.

We've seen time after time in NBA history that teams without identities struggle in the league.  Last year the Raptors didn't have much of one, and this year, because of the lack of differentiation among the roster, that could be even more true.  It will be up to Triano and his staff to forge that identity early on in the season, and hopefully some of Toronto's young gunz pick up the torch and show that they're ready to be starters in this league.

We could very well be watching a USS Enterprise run entirely by "red shirts."

And I think we all know how that will end.