After a 5-0 record and a visit to Vegas to take in some of the action, the HQ breaks down Toronto's squad and talks about what fans might expect from its participants come October...

Does an undefeated record in Summer League mean anything come regular season?

That might be the question on many Raptors' fans minds after the team's Summer League completed a 5-0 stint Saturday evening, with an 88 to 82 victory over the New Orleans' Hornets.

(The other question of course might be "what the hell happened to Iavaroni?" but we'll deal with that later this week.)

The team looked fantastic, and considering it housed at least five players who look to be locks for Toronto's roster next season, perhaps this bodes well for 2010-11?

I'm not going to go that far, but will say that there are some big plusses fans should take away from the Vegas' success.  The biggest one in my books, is the team's construction.

Unlike many of the other squads in LV, Toronto's team had a perfect mix of skill, speed, size and athleticism.  It had dominant shot-blockers and rebounders, scorers and slashers, and even an outside gunner or two, and point guards who made the best use of everyone's attributes.

My hope is that the construction of the squad signifies a paradigm shift for the Raptors' management; in today's NBA, you can't just win with guys who can pass and score.  You also need elite athleticism, penetrating guards who can score off the bounce and get to the rim, mobile, shot-blocking bigs, and players who can get out in transition and create mismatches.

From DeMar DeRozan to Ronald Dupree, Toronto's Vegas team had them.

Colangelo has already made one move this off-season to grab a speedy penetrating guard in Leandro Barbosa, and divested himself of Hedo Turkoglu, a player from the old line of thought in the process.  The Tyson Chandler trade would have been another baby step in the right direction had it not been vetoed, so I'm hoping we see the continuation of this line of thought throughout the rest of the summer.

Besides the team's construction of course, there were lots of individual plusses as well in the form of various Raptors. I've decided to highlight of few of them below starting with DeMar DeRozan.

-DeMar DeRozan:  DeRozan was the team's MVP without a doubt.  He finished fourth in Vegas League scoring with 21 points per game and more importantly, did so on a very efficient 58% shooting.  As you'll hear tomorrow in our interview with Summer League coach Eric Hughes, he's got a ways to go, but DeRozan has made big progress in terms of getting his body square on jump shots, and honing his mid-range game.  He looked miles more confident than when I saw him last summer in Las Vegas too, and that's saying a lot because he was pretty solid last year as well.  He was better moving without the ball, was extremely aggressive, and did a much better job using his athleticism I felt.  DeRozan was one of the Vegas studs for sure, and had many media members looking at him as a candidate for a breakout sophomore season. 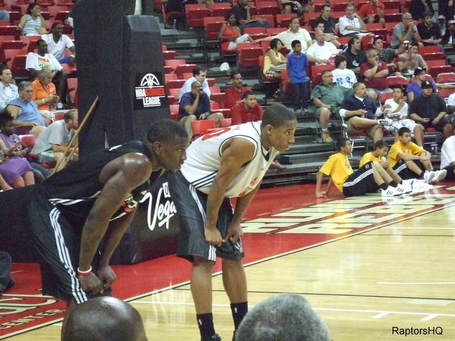 -Sonny Weems:  While Weems might not have scored quite as much as DeRozan, or rebounded like Joey Dorsey, at both ends of the court he was extremely effective.   He did a great job getting to the rim, was aggressive on D, and made some beautiful passes to get open looks for his teammates.  He didn't shoot the ball that well (44% from the field during the four games he played) and had too many turnovers at times, but paired with DeMar made things incredibly difficult for opponents.  The two used their athleticism to create mismatches and wreak havoc in the air and my hope is that Toronto gives the two of them a shot in the starting line-up together at times, as they look to have developed some really nice chemistry.

-Ed Davis:  I'm not so sure what to say about Davis.  He looked great in his first match, but in the next two, was a bit invisible.  Then he poured it on in the final two games looking quite dominant, especially on D.  Do we chalk this up to simply a young guy who of course will have consistency issues in his rookie season?  I'd say that's a bit part of it, but I do have some concerns now having seen him up close. 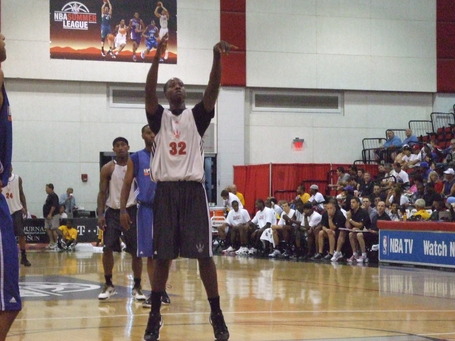 For starters, he doesn't have a great frame.  His shoulders are narrow, and I have to wonder how much he'll be able to fill out.  He's just a kid for sure, (he looks 15), and might even still be growing, but bone structure for athletes is very important because it usually indicates how much weight they can carry.  With Davis, it's not that I want him to be Joey Dorsey's size, but right now he's going to struggle against the men in the NBA considering he had trouble in Summer League.  Davis averaged only 6 rebounds a game, and failed to finish in the top 30 in rebounding as players like Koby Carl (a point guard) and gasp, Patrick O'Bryant finished ahead of him in this area.

The other thing of course is that he has very little offensive game a present.  He did shoot 63% from the field but a good portion of this was off of put-backs and dunks.  His face-up offense is a bit hit-and-miss but what should be encouraging to fans is that it got less and less tentative as the games went on.

He's definitely a project, but he does some really nice things on the defensive end already, and that alone bodes well for the Raptors.

-Solomon Alabi:  Alabi could be a real steal when all is said and done.  He's got great size, length, bulk, and looks like he'll be able to give Toronto spot minutes at the 5 as soon as next season.  I had a good chat with ESPN.com's David Thorpe, who's been working with Alabi this off-season.  He said that Alabi still needs to get stronger in his legs and lower body, something they're going to work on the rest of the summer, but that he's already progressed a great deal since Florida State.  As well, he noted that Alabi is a lot more polished offensively than people expect.

Having watched Alabi a good deal in college as an ACC rival of Duke, I too noticed how much more advanced his offense was at this stage than even in college.  Numerous times he knocked down jumpers from the top of the key with ease, and had good mechanics on his shot.  He's also got a great motor and certainly isn't afraid to mix it up in the paint, something Toronto really needs some extra help with.

In fact I came away from Summer League thinking that Alabi, not Davis, was the better prospect in the short term especially, and I'm not sure I'm the only one.  Thorpe and I discussed this and he admitted he wasn't sold on Davis, (although his tweets on the weekend made it seem like he's warming up to big Ed) and preferred the likes of Patrick Patterson.  I added that Larry Sanders was a player I thought would end up being a superior NBA player than Davis and Thorpe agreed that he certainly had the opportunity.

-Joey Dorsey:  Remember those He-Man toys back in the day, the ones that had smallish legs and huge muscular torsos and heads like this? 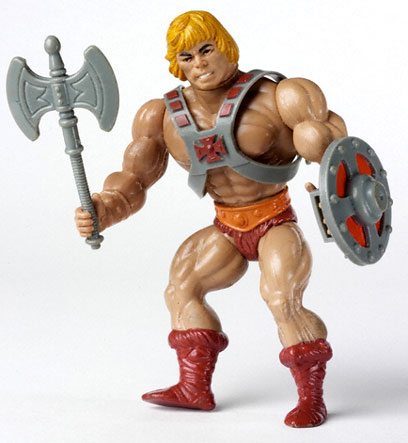 He's a beast and watching him in Summer League really validated my thoughts on his NBA potential both after he finished at Memphis, and when Toronto picked him up this year.  Dorsey averaged nearly 10 boards a game, good for second best in Vegas behind only DeMarcus Cousins, who played a great deal more minutes than did Dorsey, who only averaged 20 a match.  I have no doubt that he'll be able to come in and give Toronto much more reliable minutes than Patrick O'Bryant next season (although yes, that's not saying a lot), and perhaps more than even guys like Davis and Belinelli.

And the bonus is we're not talking "bull-in-the-china-shop" here.  Dorsey averaged under 3 fouls a game, a huge feat for Summer League, was excellent in help defense situations, and even showed a nice touch on offense around the hoop.  Most importantly, he didn't try to play out of his role ala Kris Humphries.  He set hard screens, rebounded the ball, and fought in the paint every game.  Can't ask for much more than that.

-Bobby Brown:  Brown is the last player I wanted to touch on, because I think outside of the five previous players, all current Raptors, Brown has the best shot of being on the team come October.  He finished in the top 15 in assists per game, hit 67% of his shots including 50% from downtown, sunk almost 90% of his free-throws, and most importantly, did a great job leading the break and putting his teammates in a position to succeed.  Sure, he's not a pure point as his 4.0 assists per game demonstrate, but he averaged only 1.4 turnovers, and had great chemistry with the likes of Weems and DeRozan.  The Raptors' coaching staff, as you'll hear tomorrow, were quite high on him and at 6-3 with NBA experience, there's no question in my mind that he's got a shot at Toronto's 3rd string role should Marcus Banks be shipped out of town.

All in all then, it was an extremely successful summer session.

Between Toronto's on-court play, and some incredible networking opportunities for myself and the HQ, things went very well.

Besides, where else can you find John Wall sitting across from you signing autographs?

As I mentioned last week, it really is a unique environment where past, present and future NBA stars mix and mingle with various media and fans, making for a very interesting experience, and I'm looking forward to next year already.

Anything else to update?

Not really as we now go from Free-Agent/Chris Bosh frenzy to Summer League to "let's see what Colangelo can pull off next" mode for the following month or so.  As mentioned we'll take a final look at Summer League tomorrow in our chat with Eric Hughes before doing a bit of a post-mortem on our buddy Hedo, who had his ticket to Phoenix officially punched while I was in Vegas.

Of course he now needs to have his gallbladder removed, and for that, I can actually sympathize considering I went through the process a few months ago myself.

That being said, it's quite possible this whole condition was brought on thanks to a lifestyle that consisted of nights at Lobby, and a diet of Pizza Pizza and Sprite so...

One final Vegas tale to wrap things up.

On the Tuesday night a bunch of the SB Nation crew gathered at the Palms to talk shop and participate in a little black jack.  I eventually made my way over to the roulette table where I was joined later by a couple poker pros participating in the World Series of Poker, and three girls from South Carolina.  The girls, when they found out what I was in Vegas for, told me about this great hook-up they had from a guy they were going to see later that night.  Apparently he had gotten them tickets to the first Cavs-Heat game of the season, something I noted was an incredible score.

They agreed, and couldn't wait to go and see the match later in the week...

Later in the week?

At this point I asked if they knew that it was Summer League, and any contests between the Heat and Cavs were far more likely to feature Dexter Pittman and Shavlik Randolph as opposed to LeBron and Wade...

Let's just say they weren't exactly impressed, and I imagined their "hook-up" was going to be short three female companions that evening.