So in Day 2 of the Can Ball Report's sitting in at the Men's Development Team Camp, there were still more things to be seen and heard in the friendly confines of the Air Canada Centre.  Find out what else we could have possibly thought off right here ...

So for the second day in a row, The Can Ball Report was up bright and early, the key word being early, and at the Air Canada Centre again for the Development Camp and it was really much of the same stuff – drills, drills and more drills.  Fun, fun, fun for sure right?  Not so much when you wake up feeling like you body was tenderized by a cricket bat (don’t know why that was.  I may have been a little dehydrated I guess after that marathon basketball playing sessions of the last few days).  Nothing in the ways of game action again but there was lots to see and hear during this session.  Take a look below on what the slightly defective eyes and subtly failing hearing had observed …

So the first thing I noticed is that when everyone showed up to start the session, there were two noticeable absences:  Tyler Fidler and Ryan Rosznaki.  I don’t think I mentioned it but as I was entering the Flight Deck yesterday, I noticed that both these players were dressing to leave as the others were taking the floor.  I had thought that these two were just getting stuff in the locker room but they just never returned.  I guess they are not returning.  I was actually looking forward to seeing Fidler up close and what his skills set was all about after being listed as a 6’9" guard.  Rosznaki was a question mark for me but he seemed to have a great freshman season at Assumption College, a DII school in Massachusetts, and I was looking to see more.  Oh well. 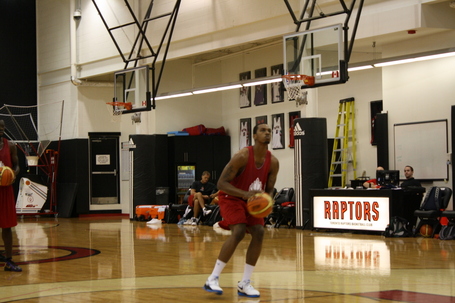 Next, Kris Joseph seemed to be in a mood again this morning.  I know that there are some guys that look like their personalities (Think Tim Duncan and the many expressions he has-all one of them).  Joseph is one of those guys.  He’s a very laid back kinda guy and his demeanor shows it.  Never too excited it seems.  But he was a little off today when I was there.  As anyone who is on Twitter may have heard, or if you follow the SB Nation's Syracuse Orange blog Troy Nunes is an Absolute Magician you would undoubtedly have heard that Kris Joseph had posted a comment taking a shot at Canada Basketball.  This may have been causing the funk and the root cause may have something to do with fellow Quebec native Ryan Rosznaki no longer being at the camp.  Now I didn’t ask Joseph about the comment or anyone else for that matter so can neither confirm nor deny it was the cause for the outburst but I can rely this:  during the session, Kris was called over by Coach Leo to the far end of the gym and they talked for what could have been 25 minutes.  At the end of the morning session, Rautins called out to Joseph as he was leaving and they spoke again briefly and they ended with Kris walking out and Leo holding out his arms as if to ask, "What up?", and it didn’t seem to be in the jovial, jokey way.  I don’t want to infer anything into this and say it’s fact but there definitely seems to be something going on with Joseph that is weighing heavy on his mind.

The vets at the camp were very vocal and were running through the drills like game time.  Now by vets I mean Ryan Bell and Denham Brown.  These two were the guys that were in the gym early getting up shoots, they were ones that began the drills, they were the guys encouraging the teammates and they were giving direction to the other guys when they needed it.  These two were the leaders on floor and that is a good thing.  In the case of Bell, he’s been through the crap that had gone on with this team before all the happy, great stuff last summer.  He knows how far the team has come and he knows how what these newer guys need to do to continue the successes of the previous teams.  In the case of Brown, Coach Rautins had told me he asked for Denham to be a leader in this camp and he is stepping up in a huge way.  If these two guys happen to make the trip to Europe, I would be shocked if they don’t make the Senior Team for Turkey.

Among my few "Who dat?" questions when it came the players on the roster, Djim Bandoumel was the name in mind right after Rozsnaki.  I asked Coach Francis about him and he said that he didn’t know much about him either other than what I did.  Jim, as they called him, was the most energetic guy in the place.  He seemed to be taking in everything with a wide-eyed wonder, which is truly refreshing.  I had no clue who he was but he said hi to me with a smile Tuesday morning.  I gotta say I like this kid already.  He has hops, he’s competent with both hands and he has good quickness.  His only drawback, and Coach Francis mirrored my thoughts, Bandoumel is very, very raw.  You can’t teach height or long limps and he was soaking everything in like a sponge so he has those going for him.  He kind of reminds me Joel Anthony with both hailing from Quebec, both took the JuCo route to D1, both having similar builds and as well as looking alike too.  I sincerely hope he can develop because he genuinely seemed like he wanted to be at the camp.

I got to talk to Denham Brown yesterday and he was not the guy that I had built up in my mind.  Through what I’ve read, heard and imagined, I was expecting a guarded, maybe even arrogant guy.  I’m glad to say that I got the opposite.  Brown was very friendly and cordial and, for a guy that was supposedly quite standoffish and brooding, he smiled a lot.  It totally blew away the image I had of him and I’m happy to say that I hope that he makes the Senior Team. 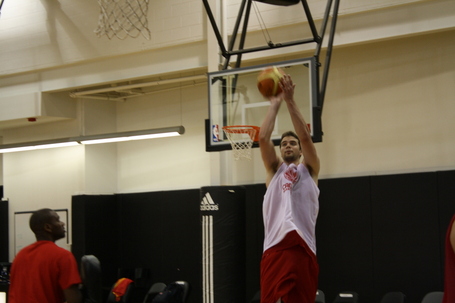 Calgary’s Kyle Landry looks a lot like Canadian actor and Fringe star Joshua Jackson.  There may be a slight height difference between the two but they have similar appearances.  I think that would be a good thing.

I had interviewed Santa Clara Coach Kerry Keating for a story on Marc Trasolini a while back and Keating mentioned that Traz can shoot the rock.  Sure he can Coach, he’s your player so he shoots the lights out.  Today I really got to see him shoot and Traz has a really feathery touch.  In all the drills, his step back, face up and turnaround jumpers were all nice looking.  Now I didn’t see Marc launch threes like Keating would like for him to do more of, but when Traz did shoot he was finding the bottom of the net and all net only if it went in.  I can’t wait for him to be set loose next year to bomb from three for the Broncos.

Waterloo, ON native and current Maine Black Bear Murphy Burnatowski looks more like a football player than basketball player.  He’s listed at 6’6" but he seems to be a lot bigger than that.  I can’t wait to see him at Maine next year.

In talking to Gonzaga’s Kelly Olynyk, I found him to be a very well spoken and confident young man.  I’m sure that being a part of a nine man recruiting class and playing meaningful minutes on a very good college team accelerates the process.  But in my interview with Olynyk one thing really struck me:  Kelly has some small feet.  Or at least they seemed small compared to his height.  I’m sure that he’s got to be around a size 15 but the shoes he was wearing made them look like he was a size 8.

The CIS post guys Troy Gottselig and Michael Lieffers were very good in the drills.  There was not super flashy nor were blowing me away with their super human athletic abilities but they were very solid. 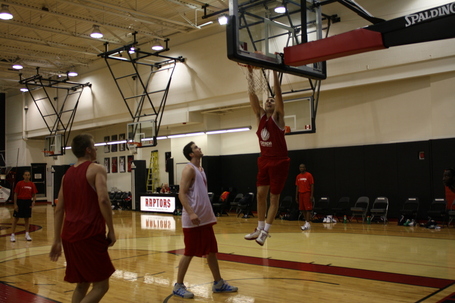 And lastly, the best thing I heard all session was Coach Renato Pasquali during a team drill.  In one of the drills, he has told the players to make an aggressive move to the basket before passing off to the one player in the corners.  Everyone seemed to not doing this so he spouted out at all the guys, "Don’t be wussies!  Make a strong move."  The team broke out chuckling under their breath, and that included me.  I’ve seen enough of Coach Pasquali over the last few summers to know him as an incredibly intense and passionate individual when it comes to working the game.  Him yelling at players or barking sets, that I’m used to.  But this crack, totally not expecting it.  Maybe Coach Pasquali has lightened up a little and is comfortable in this setting now after a few years.  Or maybe he really thought these guys were playing like wussies.

Well, that’s what I came away with today at the morning session.  That morning session was likely the last one The Can Ball Report will be attending before they leave for their tour this weekend.  Despite the mild displeasure of waking up really early on my days off from my day job to be there, I had a lot of fun at the ACC.  Seeing players and coaches in an environment that so few have access to is always a good thing and I think these players will be heard from again in some way soon.  Stay tuned in the coming days for more exclusives from the camp.