Trekking down to the Air Canada Centre at an early hour on Tuesday morning is never fun except when you have a chance to take in a Canada Basketball training session.  The Can Ball Report was present for the first morning session for the Men's Development Team and besides slowing up the rushing people who were late for work in downtown Toronto, we got so see some new faces and returning ones too.  Check out what our impressions of the camp environs from Day 1 right here ...

OK people, as I said yesterday and earlier this morning on Twitter, or the night before on the site, The Can Ball Report was heading down to the Air Canada Centre to get a glimpse at the Development Team at their mini camp before they set off for their whirlwind European tour starting this Saturday.  Well, technically it was Day Two, or more accurately Day 1.5 since they had a session at 5:30pm yesterday but whatever it’s underway.  I didn’t get to see much in the way of scrimmage since there wasn’t any but I did get to see them in drills which give me a good idea of how these kids have come along from the last time I saw them (which for the CIS players is likely never).  So without further adieu, here are my random thoughts on today’s camp session …

First I was impressed that these guys are all here.  The list that gets sent out and the players that show up tend to be off by at least one or two guys but everyone on the roster that was sent out were accounted for.

With that in mind, I had found out that two players that were invited to the camp had declined their invitations:  Myck Kabongo and DJ Wright.  I can fully understand Kabongo declining his invite based on the fact that this kid has played in every event he was invited to since his school year had finished and had just about played himself into a hospital bed (remember he played at the NBA Top 100 Camp with a flu or some kind of sickness).  I would say he deserves the rest.  As for Wright, I’m not sure why he did.  If you remember, Wright was a First Team JuCo All American at Salt Lake Community College where he led his team to the National Championship before transferring to Mount San Jacinto in Cali. He had abruptly left about midway through the season and no one has heard from him since.  It’s good to see he’s still on the radar though.

There was a good mix of NCAA and CIS players.  All the players were on about the same level athletically, more or less, and the skill sets were equal on all accounts.  No real drop off in talent. 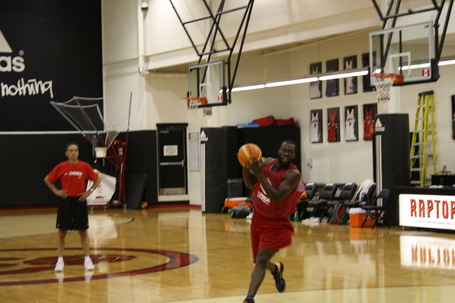 Seeing Denham Brown at the camp was a good thing.  I, like everyone else in the Canadian basketball community, had wondered if we’d ever get a chance of seeing Brown in the red and white again.  After his spectacular three game showing for the Iowa Defenders of the D-League, during the championship series no less.  He looked good in the shooting drills making everything without rim if it went in and he also looked a lot leaner.

Kris Joseph looked noticeably annoyed at the camp during drills.  I don’t know what it was but he looked like he was in the drills half hearted, or at least distracted.  He showed flashes of his game but that’s all he showed.  I guess the true K-Jo shows up during game time.  I wonder what was eating him up. 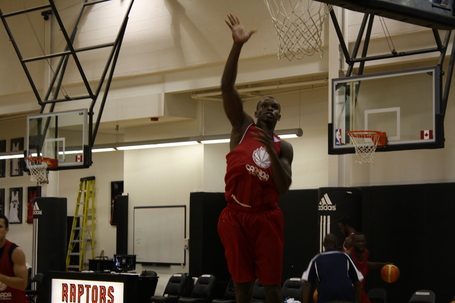 Of the players that were there, Ryan Wright looks vastly improved offensively.  After seeing him at the Nike All Canada Camp about six years ago, he was an obvious athlete with a burgeoning game.  At UCLA he was a project stuck in a logjam situation.  His two seasons at Oklahoma showed an improved offensive game and a better defensive game too.  In any case he was still very mechanical looking and not so fluid.  Today he looked a lot better.  Now I’m not saying he’s Garnett but he’s not exactly Ben Wallace anymore either

The inclusions of National Program vets Rans Brempong, Jesse Young and Ryan Bell were odd to see with all the young bucks but after speaking to Coach Leo, it makes sense.  The camp gives some vets a chance to get back into game form as well as get reacquainted with the program.

Kelly Olynyk is one tall dude!  I recall the Gonzaga basketball site listing him at 6’10" but had to have grown some since the start of last season.  In the post drills, he was standing alongside the other bigs and in sequence he stood beside both Kyle Landry and Marc Trasolini.  Olynyk looked like he was easily three or four inches taller than Traz and Landry who are both listed at 6’9".  Olynyk had to have put on a couple inches this year.

And lastly, Jesse Young is a real class act.  This guy walked me out the ACC, walked with me up the street and talked to me until we had to part ways and he even remembered enough of me to ask how I’m doing.  Young is a true class act indeed.  Oh yeah, can we all give a shout to Jesse and his wife who are expecting their first child soon.

Well, that is all that really stood out.  If you’re reading this now, you should know that I’m just about out of the Wednesday morning session.  If you missed it check us out at the Can Ball Report Twitter account, @CanBallReport, for a run down on our thoughts during the sessions and any other thoughts that come to mind.