RaptorsHQ breaks down yesterday's pre-draft workout, talks about their final five options at the 13th pick, and looks ahead to this weekend's free-agent camp...

In what the Basketball Jones' Tas Melas aptly described as "the most beautiful, ugly game" he had ever seen, LA took control late and got some heroics from unusual sources like Ron Artest and Sasha Vujacic to seal the deal.

NOW the real work can begin.

With the playoffs concluded and the NBA Draft only six days away, I imagine things will really start to heat up on the draft and trade scenes.  In fact all ready we've seen one significant trade go down, with Philadelphia moving Samuel Dalembert in exchange for Andrea Nocioni and Spencer Hawes.  That deal seems a bit bizarre to me from a 76ers perspective but perhaps there are more moves forthcoming.

As for the Raptors, they again had a group of prospects in for a look yesterday, and this was perhaps the most talented bunch yet.  Of the six, the four standouts included Kentucky's Patrick Patterson and Eric Bledsoe, Kansas' Xavier Henry and Fresno State's Paul George.  As you know we've been rooting for Henry or George to end up in a Raptors' uniform the night of the draft and it was great to see them up close.

Unfortunately, neither swingman was at the top of his game.

George suffered a hip-pointer halfway through the workout and Henry's back had tightened up the day before, making his mobility an issue.

That being said, you could see why both prospects are incredibly attractive to NBA Teams.  George simply looks the part of an NBA swingman with great length and effortless moves to the basket.  Henry can shoot the lights out, and has an NBA-ready body that he should be able to put to use on the defensive end of the court right away.

Looking at the Kentucky duo, both showed off their myriad of attributes as well.

In full-court 3-on-3 drills Eric Bledsoe led the break, finished at the rim, and shot the ball well from deep.

Patrick Patterson, the most polished player on the court, did just about everything well, hitting his mid-range shots, rebounding the ball in traffic, and finishing strong.

Of the group, Patterson stood out the most to me. 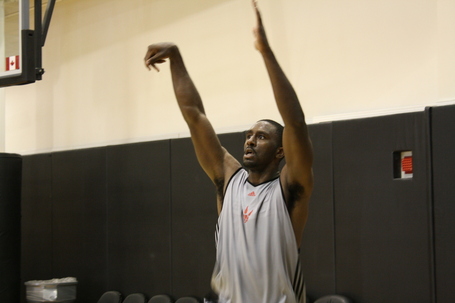 While I compared him to another former undersized 4 for the Raptors, Corliss Williamson, I'm admittedly warming up to the idea of him being drafted at 13 by Toronto.  Unlike Williamson, Patterson is much less of a "bull-in-a-china-shop" and has great length despite his height, similar to Elton Brand.  I'm now wondering if his situation isn't similar to that of David West's when West came out of college.  Despite dominating at every level, West saw his draft stock plummet for no real reason other than a "lack of hype" shall we say.  Patterson's stock is all over the place in mock drafts, from the lottery to late first round, and I asked him about this bizarre situation:

RHQ:  Patrick, you've dominated at every level you've played, you put up 14 and 7 last year at Kentucky, on a pretty loaded team...it seems though that some folks are sleeping on you a bit, can you talk to us a bit about where you feel your stock is right now and maybe why some people aren't looking at you in the top 10?

PP:  I think my stock is just first round.  I'm trying to get lottery, I'm working out for a bunch of teams, and like I said, I'm hoping to go lottery.  Just because I played on such a loaded team with Eric, John, DeMarcus, Daniel, and the rest of my teammates, we were loaded, and anybody could score on any given night.  And I think because my numbers dropped down from my sophomore year, averaging like 19 and 9, now it's 14 and 7, teams I guess don't believe I can score as well, and I can't rebound, just because I didn't do it as much last season because of the team we had.  So, I think that's why teams are a little hesitant on drafting me and putting me in the lottery.

RHQ:  Does that make your decision to return to Kentucky at all?

RHQ:  Are you more comfortable as a face-up or back-to-the-basket player?

PP:  I'm still more comfortable with my back to the basket just because that's what I've done all my life.  But I've definitely improved on my face-up game because that's something I've been working on every single day and I'm just trying to show them different areas of my game that they haven't seen.

RHQ:  Do you feel you need to emphasize that part of your game perhaps, going into the league, that face-up part?

PP:  Definitely just because, you look at the "big men" now, 6-10, 6-11, some 7-foot at the 4.  So, I know I have to work on that and finishing around the rim with size, and also my face-up game as you said, my ball-handling, and the ability to take a big man off the dribble, just keep improving on that because that's something I will flourish in at the next level.

Patterson not only impressed on the court, but also was one of the better interviewees for the media in this process. To me, he's one of the group of five that the Raptors are seriously considering at 13.

-Avery Bradley (who again, did not work out due to an ankle injury and was not in attendance for interviews either.)

If the other four are all off the board before 13, I'd say the Raptors grab the Fresno State product and look to make him their 3 of the future.  He needs to work on his handle, and obviously is still quite raw, but he's just got a certain smoothness to his game that you can't teach.  He compared himself to Joe Johnson and while George is taller and longer, you can see some of the similarities, particularly in their mid-range games. 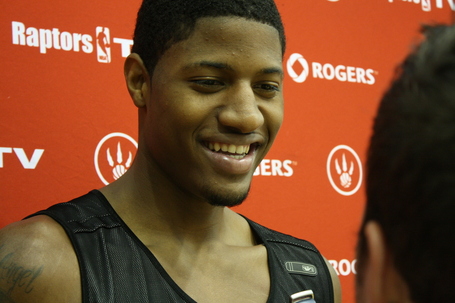 I managed to grab George for a one-on-one after the session and you can listen to the talk we had below:

So what about Xavier Henry, a player who had been atop our draft board most of the season in terms of "would love to see Toronto take?"  I'd still be excited about the possibility of him ending up in a Raptors' uniform, but it sounds like he's option 6 or 7 for the Dinos.  I talked to the Raptors' Senior Director of Scouting, Jim Kelly, about him after the workout and here's what he had to say:

JK:  It was a good idea, but it didn't quite pan out like we thought (because of injury.)...I think (shooting) is really his strength, shooting the ball from outside.  If anything I'd like to see him a little more assertive going to the basket, he's got a great body, he's a big, strong kid, and he shoots, I think he shot 41% on 3-pointers there, he relies on that a great deal.  But I think, he's only a freshman, and there are other aspects of his game that he has yet to develop there and I think that would be one of them, going to the basket because he's got an NBA frame.

Ok so maybe I still see some Mo Pete in Henry but regardless, I think it's a long-shot that Henry ends up on the Raps when all is said and done. 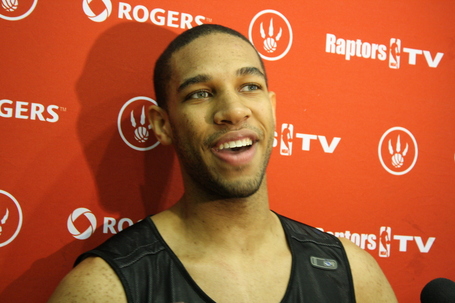 A few more interesting tidbits from talking with Kelly.

-It's probably safe to cross Hassan Whiteside off the "options at 13" list.  Kelly noted that while he "does some phenomenal things...at other times you just sorta watch him and he's just sorta watching everybody else and you want to say let's go, let's go..."

-Another name to keep in mind for the Raptors is Eric Bledsoe.  It's hard to see that much of a difference between he and Avery Bradley and if Toronto goes big at 13 and grabs a second first-round pick, then Bledsoe could be a great option.  Kelly discussed their similarities, and when I asked Eric about this, he noted that Avery was "probably a bit taller, but that he, himself was bigger and stronger."

-Also, the Raptors are definitely looking at the best option available at 13 and aren't set on one category or another.  In other words, they aren't only looking to go big or small, it's really going to depend how the cards fall above them.

I'm starting to believe the team is going to go small at 13 actually and part of this is because of who's likely to be left of their five-some at 13, and also partly because of Amir Johnson.

Johnson was back in the house again, working out with Sonny Weems, Jarrett Jack, DeMar DeRozan and Joey Dorsey after the draft workouts had concluded.  This is a huge statement as a free-agent and with his return and apparently the team's view of Joey Dorsey as part of the Raptors' future, I'd say they look at Bradley as option 1 A if he's around when they pick...especially since Aldrich, Patterson and Udoh are all expected to be gone.

A few notes too after watching the quintet get in some time with the Raptors' coaches:

-We noted DeMar DeRozan's improved physique but his mid-range game also has improved and looks a lot smoother.  The Raptors' coaches had him at one end of the gym with Weems and Jack, coming off screens, ok, pylons, and shooting 12-footers.

-Sonny Weems' 3-point shot looks a lot better as well.  At one point he effortlessly drained about 7 in a row and it's great to see him focussing on expanding that part of his game.

-Joey Dorsey's shot mechanics are miles ahead of where they were at Memphis.  I hadn't seen Dorsey much since his days running with CDR and Derrick Rose on the Tigers but it's obvious he's changed his game as well.  He was a horrific free-throw shooter in college thanks to some wonky motions on his shot but things look a lot smoother now, something huge for a player who projects next year as a banger in the paint.  I expect him to draw plenty of fouls in the limited minutes he gets so knocking down free-throws is key.  He still looks a bit like one of those old He-Man toys (all torso) but he's slimmed down and looks to be in the best shape ever.  This was confirmed by Raptors' Assistant GM of Player Development, Marc Eversley.

Finally, bring on the Free-Agent Camp!

Yes, the Raps kick off their latest edition of "So you think you're the next Jamario Moon?" today.

As I discussed yesterday briefly, I'm not blown away by most of these names but there are a few intriguing prospects such as Jack McClinton and James Mays.  McClinton was a lights-out bomber in the NCAA as a bit of a combo-guard, and before an ACL injury, Mays looked to be a solid back-up PF in the league, a gritty, yet undersized 4, who could be effective in small doses.

Our counterparts at Ridiculous Upside have done a great breakdown on each player and as you can see, they share our confusion as to why some of these guys even got invites.  I was hoping to see recent college studs who fell through the cracks like Jerel McNeal and Paul Harris, or perhaps some true NBA vets who have at least proven themselves to some degree in the league.

As a result, we won't be dropping by the ACC today but will on Saturday for a complete round-up of how the free-agent camp went.