It's time to welcome the defending champs at the ACC, but the entire NBA is talking about a few other teams.  Vicious D looks into tonight's game and the trade that has rocked the NBA world.

Sometimes, the least deserving players get the most. It could be argued that Hedo Turkoglu is a man of Magic and I mean in more ways than one.

Hedo Turkoglu now rejoins a team and place that his wife never really wanted to leave, left with a contract which he wanted in the first place and will once again look to help challenge for the NBA Championship.

I'm sure Raptors fans don't quite care all that much anymore.  It's been a good half a year since we parlayed the "Turkish Michael Jordan" for the "Brazilian Blur", and Raptors fans and management couldn't be happier.  However, there are a ton of connections to the Raptors.

For example, Vince Carter gets shipped out to Phoenix to play with Steve Nash.

And Orlando, despite all the changes that they've made, have essentially traded some pretty good defensive pieces for a lot of questionable offensive ones.

Turkoglu, for example, was never a huge defensive threat and has looked out of shape after chowing down on all the Pizza Pizza and In-N-Out Burgers he could get his hands on.  Jason Richardson was a huge threat from downtown thanks to how Steve Nash got him the ball.  If he can do more of the same and fill in the role that JJ Redick (inconsistent this year) and Mickael Pietrus (shipped off) once filled, I suppose the Magic can come out even.

But then there's Gilbert Arenas.

A guy who has lost his shooting touch, is extremely selfish with the ball, had a tendency to turn the ball over even at the height of his career, and has just about zero defensive acumen. 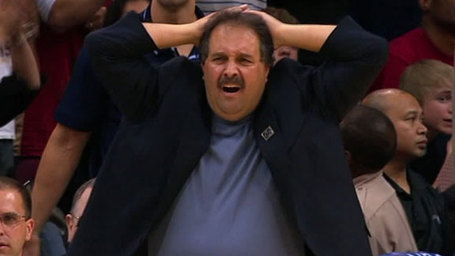 Yeah, I can't wait to see Stan Van Gundy have a heart attack this year from all the yelling he does.

But back to local matters...

The Raptors host the Los Angeles Lakers and to say that I'm not looking forward to this game is an understatement. Nothing in the past two weeks has shown me that our team can find the form that allowed them to beat teams such as the Magic or Celtics.  Now L.A. comes trotting in and they even have Andrew Bynum coming off the bench this time, and Joe Smith is now acclimating himself with the team.

Oh, and Mr. Bryant is coming off a nine point night, which is only the 73rd time in his career that he hasn't scored in double digits.

Can we find a glimmer of hope in today's 3 Keys?

1) Get the DeRozan and Bargnani show goin' - DeMar DeRozan hasn't exactly given us the consistency we've needed, but with a young player, it may be too much to ask for.  So in today's game, we're going to need to see the DeRozan who challenged Kobe about a month and a half ago.  DeRozan worked Kobe on both sides of the floor and attacked him and the rim with young legs.  It's a big need in today's game.

Andrea Bargnani, on the other hand, has been one of the more consistent players.  Yes, he's had lulls, but I'd also attribute a lot of it to how he's been involved in the game.  Establish his post presence early, and the Raptors will get a player who will be hustling and moving on both ends of the floor.  It's pretty much a "need" for every game at this point, and it's why I think Jose Calderon is a much better option for this team than Jerryd Bayless at this point.

2) Attack the Lakers' second unit while you can - Phil Jackson has always been pretty good at managing his roster.  By mixing in his bench with the starting unit, he's generally had a consistent team on the floor for the entire game.

However, I think Jerryd Bayless can take advantage of Steve Blake and Leandro Barbossa can take Shannon Brown off the bounce.

So where does that leave us?

We pretty much need a strong effort from our second unit to stay competitive.  This may be a game where we'll see the second unit outshine our first, but against the Lakers, it's almost a necessity for it to happen. Which quickly takes us to our third point

3) Keep it close, give it a chance - It may take a near perfect game from some of our players, but the Raptors have to play this game like it's a playoff game.  They may be able to catch the Lakers napping but it's only going to happen if they limit their costly mistakes that have been plaguing them recently.  Things like turnovers, poor shot selection, and a lack of transition defense will quickly turn this game in to laugher.

They need to give it a chance.