The Art of a Beautiful Game By: Chris Ballard – A Review

Share All sharing options for: The Art of a Beautiful Game By: Chris Ballard – A Review 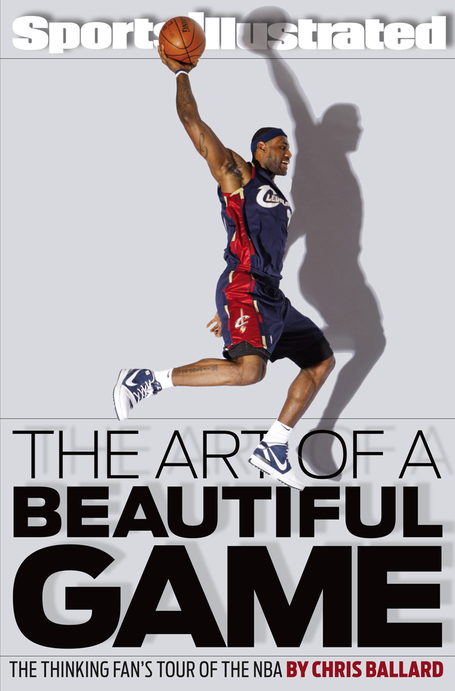 Taking a look at one of the newest books on the NBA.

As a result of my day job I read a lot. Actually, as a lawyer I spend a good majority of my day, reading. As a result, when I get home I don’t have much motivation to read much more. In fact, I am usually a good three or four issues behind in my Sports Illustrated and ESPN the Magazine reading. It’s usually when I am on vacation that I get caught up (as I did this past week).

When I do finally manage to find time to read a book it’s generally a biography, non-fiction, or something financial. It’s been a long time since I have picked up a Stephen King, Robert Ludlum, or Dean Koontz.

One thing I have never read is a book on basketball, or any sport for that matter. Now I do read a lot about sports, but outside the two magazines referenced above it is almost all online reading. Well this all changed over the holidays.

While on vacation I read The Art of a Beautiful Game, by Chris Ballard. It’s been available at book stores for a couple of months now so maybe some of you have already read it or many you received it as a gift over the holidays. If you did, you should definitely take the time to read it.

The book itself looks at various aspects of the game, from shooting, rebounding and shot blocking to the parts of the game that make it so unique, for example the 7 foot giants who man the paint. The material is not ground breaking per se, but the way he writes about each element is.

Through the use of personal stories, anecdotes and interactions and interviews with players, both current a retired, Ballard helps describe, for example, the art of shooting, by discussing his day with Steve Kerr. Each chapter is dedicated to a different aspect of the game of basketball and focuses on a particular player or individual who has, or had, excelled at such a skill. Killer Instinct: Kobe. Point Guard Play: Steve Nash. The Superbigs: Yao. This approach keeps your interest and I found myself looking forward to the next chapter.

The two chapters that I found particularly interesting, given the issues the Raptors continue to face this season, were "The Rebound: Dwight Howard and the Science of Extra Possessions" and "The Defensive Specialist: Stranded on Kobe Island with Shane Battier".

The chapter on rebounding was enlightening given the Raptors have a 7 foot center with little ability to rebound the ball and on a whole the team’s General Manager has preferred to take an approach that, for the most part, relies more on shooters making shots, than having players who can create second and third chance opportunities. If what Ballard sets forth rings true, don’t hold your breath on Andrea suddenly becoming a double-double threat and expect this team to continue to be mediocre.

The chapter on defense was however, the one that has left a lasting impression. I for one have always been a big proponent of the fact that defense, more than any other aspect of the game, is all about effort. I still believe that to a point, but now, in today’s game where statistics have become the measuring stick for what seems like everything, it’s really about preparation and studying your opponent and their tendencies. I was absolutely taken aback by how much tireless effort and pride Shane Battier puts into defending the leagues best. Given last years Rockets squad featured both Battier and Ron Artest it shouldn’t have come to a surprise that they gave the Lakers all they could handle in the playoffs. It also had me wondering where the disconnect is for the Raps on the defensive end - is it preparation or commitment?

On a whole this book gave me a new found appreciation for the games greats. Players like Bryant, James, Howard and others are not simply great at basketball because of their talent. They are great because they are tireless in how they hone their craft. They are each on a quest to achieve the unachievable – perfection. Ballard’s stories on how each of them "go to work", and the individual trainers that help them strive to get to another level, is eye opening. You may not like Kobe Bryant and his demeanor but you have to acknowledge and respect his work ethic. On the flip after reading about how hard many of today’s stars have worked to gain such status you can’t help but think of the players who have wasted similar talents. If each player in the NBA had half of Yao’s work ethic it truly would be the best game on earth. Instead for each Battier there is a Tim Thomas.

In his book Ballard has managed to successfully walk the line between providing interesting statistics and historical background information while keeping things light and entertaining. As a fan of the game I took a lot from the book and will likely look to it a number of times this coming season as we continue to cover all things Raptor.