Vicious D gives us a breakdown of his first Media Day event and how sometimes the best opportunities and interesting moments come after the huge scrums...

There are times where I've been incredibly thankful for the opportunities that have been given to me thanks to the HQ.  While Howland and Franchise are old hands at Media Day, this was my first time attending.  Luckily for me, there were a lot of firsts for everyone this year.  For one thing, the Raptors were holding the meeting at the newly revamped Gate 2 area rather than at their practice facility.  It was key for several of us because it leveled the playing field somewhat because the area was untested.  Often, multiple players would exit the TV interviews area and would become swarmed with the scrum.   Sometimes however, you could manage to get some alone time with a major player before the media outlets would rush over.

What you've heard over the years is true.  The media outlets are fairly ruthless with how they set up their questions and how they grab their sound and video bites.  However, most of these outlets would also pick up the same footage as they would all move together at the same time from player to player.  As a result, a lot of the same stories will appear thanks to how people choose to pick up their bites for the 6 o'clock news.

For us in the independent press however, Media Day is invaluable.  We're allowed a bit more luxury to grab personnel and players we don't always have a lot of access to. For Franchise and myself, it meant that we would be looking to bring you the more personal side of the players.

For example, did you know that the best way to get photos of the players is to hide around the concession stands?

As the players started to filter in, each of them seemed drawn to the new donut stand and their tiny donuts.  Reggie Evans seemed to make a bee line for the stand and picked up quite a few with Patrick O'Bryant, while Marco Belinelli ended up sharing his food with his buddy.  Afterwards, it was off to taste the new hot dogs.  Of course, you get to run into a meal between Chris Bosh, Jarrett Jack, and Antoine Wright.  I was lucky enough to try both the hot dogs and the donuts and can say that your arteries will be just that much harder at the end of games, but both do taste great and are definitely above previous stadium fare. 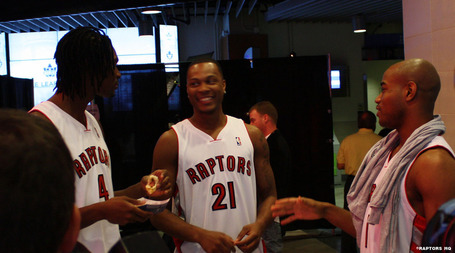 I've also found out that you get the most honest and unique moments after all the big boys have gone.

For example, I managed to catch Chris Bosh for a couple questions after his scrum, just to break up the monotony about his leg.

Raptors HQ: Hey Chris, I was just wondering what your take is on the new NBA social media rules?

Chris Bosh: I haven't seen it yet.

CB: No, my friend actually was texting me last night cause he was real excited to see the new rules and everything, but, I didn't (see them yet).  I'm sure I've got an email right now telling me everything.

RHQ: And one final question Chris.  I was just wondering if you've played Halo ODST?

CB: I don't know what that is.

RHQ: You still haven't played it yet?

RHQ: It's kind of like Halo, but with a squad. You don't play as Master Chief anymore.

CB: Alright...  You know man...  It was taking up too much of my time.  I'd like play that thing for four or five hours and you don't know where the time goes.  I felt like, you know, no offense to Halo, but I felt like I was gettin' stupid or somethin'.

So it's good that Chris's demeanor seems to be very focused on this season.  We've heard already about the time that he's been putting in the gym to bulk up, and how that's led to his unfortunate injury.  However, it's good to see that he's taking this philosophy into his recreational life as well.

Of course, earlier in the day, Jarret Jack also mentioned something about being a PS3 guy and how he and Chris will have to find some common ground, maybe through a Wii.  Jack also mentioned that he lives just above Chris Bosh in their condo, so I was lucky enough to find an opportunity to ask a pressing question from reader Jenge after Ryan McNeil from Hoops Addict accidentally set up the question. 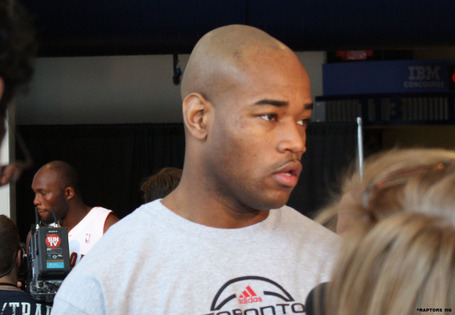 Raptors HQ:  Hi Jarrett.  Just wondering what your philosophy is on fostering chemistry on the floor as a point guard?

Jarrett Jack:  Man, it's just going to come with time.  We're not going to get it the first day, the second day...  It might take a month or so, or however long, but I think as much as we can gel and talk to one another and find out certain things like what we do like or don't like, that will be half the battle.

Hoops Addict: You mentioned gelling.  How quickly has that camaraderie with Bosh on the court come back?

JJ:  It's come back.  I know his game pretty well.  Him being hurt a little bit, you know, kinda put him out of the drills and stuff that we were doing.  But I have faith that when he gets back that we'll be able to re-live some of that old magic.

HA:  Following your twitter this summer, you were in Toronto a lot, hanging out. How did it help you get used to the city having a good friend already in Toronto?

RHQ:  So are you going to start growing out the dreads like him?

JJ:  Nah, I'm not going to. That's the next order of business, which I'm going to get him to cut those off, right now!  We're trying to get a petition goin' and you guys are welcome to sign.

RHQ:  You trying to get him back to his first year look?

Of course, it'll be interesting to see if Jarret makes good on his promise considering Chris's twists have gotten even longer this year.

Now one of the more interesting aspects of having such an international team and especially having such a large international presence is that the foreign Italian press was also in attendance.  We were lucky enough to capture some of the opening audio from Marco Belinelli's scrum before the English media swooped in to the annoyance of the Italian reporters.  I've asked one of our readers, Renato, to translate the questions so that we could get a better feel of Belinelli speaking in his native tongue and getting a more unfiltered look at one of the possible linchpins of the Raptors' offense this year. 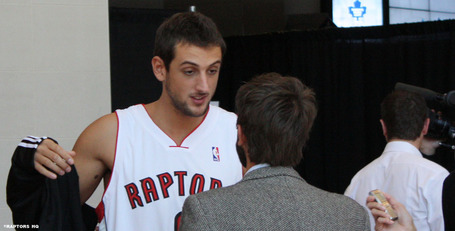 Here were the results:

Marco Belinelli:  We seem to be a nice group. We are all now waiting for training camp to see how we are as a team.  Anyway, my situation here in Toronto is very good

Interviewer: It is always important  to start on the right foot and you'll be encountering a top team for your first game.  How do you think this first game will work out, and how do you prepare for the big first match?

MB: Let's just say that personally, at the moment, I am not really focusing on that game at all (against Cleveland).  What I think is important for myself and for all of us, is to use the training camp to get ready.  During training camp, the coach will take his decisions (about whether he will be a starter or not) but in any case this will be an important year.

Interviewer: Last year because of your coach, you did not have much playing time, albeit you played well when given the opportunity.  When you played here in Toronto last year, you had a great game.  What do you expect from that past experience in Toronto?

MB:  I believe I can be important (for this team). I have had little playing time time so far in my first two years.  That is why I have plenty of energy. I know that this is definitely the best place for me.  The team is young, I am surrounded by many European players, and there is a good coach who has proved himself at the end of last season. So there seems to be all the right ingredients to do something meaningful.

At this point, the other reporters came in and butted straight into the interview leaving us with just these three questions.   However, I think you can get a really good feeling about Belinelli's optimism for this season and just how excited he is.  Renato also wanted me to point out that he's noticed that Belinelli seems more unfiltered speaking in both English and his native tongue compared to Andrea Bargnani.  Whereas Bargnani is still often thinking in Italian and translating his words into English, Belinelli seems more comfortable to speak in a natural, native dialogue.  It should make for a quick assimilation of Belinelli onto this Raptors squad and a big thanks to Renato for the translation assistance.

At the end of the day, my first Media Day was interesting and full of new experiences.  We've got lots more content from this day coming up on the site, including some interviews with management and coaches, but for me, the interesting part about this squad is just how confident everyone seems to be.  The Raptors at the end of last year seemed to be lacking hope and direction. However, at the beginning of this training camp, we're quickly seeing the emergence of a team that if nothing else, believes that they can make some noise.  They understand the challenges that are awaiting them, but at the same time they also seem to be focused on overcoming those challenges.

I'll leave with a little bit of Jose Calderon, who probably explains it best.

Jose Calderon:  We gotta get back to winning.  I think that's the only goal I have right now.  Last year, I had better numbers, individuals, but I was playing 50%, so I don't worry about that.  I just worry about win, and we gotta win this year.  We got a great team and everybody can play, everybody can contribute to this team, that's the more important thing.  That's my goal: Back to Winning.