RaptorsHQ at Media Day Part I - Jack, DeRozan, and Colangelo

Share All sharing options for: RaptorsHQ at Media Day Part I - Jack, DeRozan, and Colangelo

With Media Day over and training camp jumping off this morning in Ottawa, the season is about ready to get under way.  Over the next few days, RaptorsHQ will be rolling out a series of interviews they did with players and coaches from Media Day and this morning Franchise kicks things off with chats with Jarrett Jack and DeMar DeRozan, in addition to an audio listen in on he and the media's scrum with Bryan Colangelo.

The media sessions are done for now, training camp is under way, and the season is finally right around the corner.

Yesterday evening I posted a quick recap of some of the key notes from yesterday's media event at the newly renovated ACC, but over the next few days we roll out the various individual interviews we did, in addition to some of the scrums we participated in.

We won't be attending training camp this year in Ottawa (damn real jobs) but we'll be touching base with a close friend of ours who's attending the action, Holly MacKenzie from The Score.  Be sure to follow her on Twitter (http://twitter.com/stackmack) for all your Training Camp updates.

On to the interviews and first up, Bryan Colangelo.

I've posted this as an audio file because it was simply too long to transcribe.  Even my portions of the scrum concerning new players and how close the Hedo situation was to not happening, brought forth long answers from the Lego Master.

When the audio file starts, Colangelo is in the middle of discussing the Bosh situation next year and how the apparent amalgamation of the agents of Bosh, James and Wade will impact said negotiations.  What I unfortunately missed was the interesting point BC was making regarding his relationship with Leon Rose and Henry Thomas; from the Andrea extension this off-season (a strategic move then?) all the way back to the drafting of Michael Finley.  I found this fascinating as it really showed just how important keeping good rapports with key agents is in the NBA, and that basketball savvy and cap management are only two parts of the "successful GM equation."  You can have all the draft success you want but if you can't woo the agents to make sure said players stay around, you can find yourselves like the Minnesota Timberwolves - perpetually rebuilding.

To listen to the scrum, click here. Up next we have Jarrett Jack.

I managed to grab Jack after he had already participated in the main scrum thereby allowing me to get some questions in that normally I wouldn't have had time to ask.

Franchise:  How are you doing, bit of a circus here, Media Day!

Jarrett Jack:  You know, as expected.

F:  As expected.  So how long have you been in the city now?

F:  Ok, so have spent much time here in Toronto before?

JJ:  Naaw, other than when we used to come here, then leave right after, that's pretty much the extent of it.

JJ:  (Laughs)  I left most of my short-sleeve stuff at home.

F:  No kidding.  So talk a bit about your role on the team this year, I'm sure you've been asked this a ton of times; has Bryan and the coaching staff talked to you about sort of what they're looking for, and you know, what would you prefer I guess in terms of role?

JJ:  I mean, I just want to go out there and have an opportunity to do what I do; meaning if I play the point or the 2, if I come off the bench or I start, whatever happens, happens and I'm just trying to make the most of my opportunity.

F:  Any personal goals for you this season at all?

JJ:  Get in the playoffs man.  That's something I haven't experienced being in the NBA, and in college, I was in the postseason every year...

JJ:  Ohhhhhhhhhhh (Iaughing and mocking me)

JJ:  ...well, you know, I think postseason play here in the NBA is something I'm looking forward to.

F:  What about this offseason?  Anything you worked on in particular, training, were you playing in any certain leagues with anyone?

JJ:  Aaaah...ball handling and long-distance shooting.  Those were my two main focuses, and trying to come back in the best shape I can.

F:  Ok, and I know some of the talk about bringing you on was that this would be a real defensive anchor in the back-court for a team that really struggled in that regard last year, is that something you've been talked to about?

JJ:  Yeah!  For us to be successful we need to be efficient on both ends of the court; not only offensively but defensively being able to hold teams to one shot per possession, and also, rebound the basketball.  That's two things that winning teams have and we've gotta adopt those philosophies.

F:  Any projections for this year?  Wins?  Playoffs?

F:  ...but there are some nice pieces here right?

JJ:  Definitely, definitely some nice pieces.  We've been playing this past week and a lot of eye-brows have been raised on the amount of talent we have on the floor and I just think that ah, we'll create our own limits.

F:  Who's surprised you the most of the players that you saw just playing with this week?

F:  Cool man, well thanks and good luck this season! 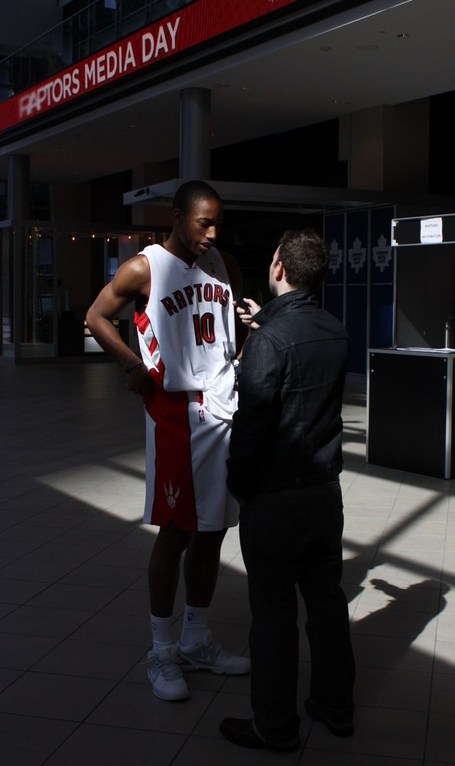 Finally, DeMar DeRozan was on his way out but I was lucky to be able to grab him for a quick second.  Here was the discussion:

Franchise:  So last time I got to talk to you was in Vegas.

F:  Talk a bit about what you've done since Vegas - you know online on Twitter, a lot of fans see you talking a lot about hitting the gym, working on your jump shot and stuff, what's sort of been your main focus this offseason?

DD:  You know, just getting my jump shot as pure as I can, getting my defence up to par, getting everything better!  I'm trying to polish up my whole game so the upcoming season I can be the best player I can be.

F:  Ok, and have the coaches talked to you at all about starting, or your role with the team?

F:  And what about this week, I know you guys got a few runs in, any players that jumped out at you?  I heard Sonny was trying to dunk on everyone.

DD:  Yeah...Sonny (laughs) athletic.  I love Sonny.  You know, everybody, everybody out here surprised me doing a little bit of everything so it's great.

F:  Do you feel the excitement level now with all the media stuff started, and now, you know, you're here - NBA time?

DD:  Definitely.  I definitely feel it, especially as a rookie going through the whole process, it's great.

F:  What about, have you talked to Tim Floyd at all or any of the USC situation?

DD:  I haven't talked to Tim Floyd recently but I'll probably get in touch with him in a bit, try to you know, get a little bit of advice on everything.

F:  Ok.  So what are you listening to right now?  Give me something that people in the T-Dot need to hear.

F:  Have you listened to Raekwon at all?

DD:  Hmmmm...you know, both of those are great albums so I could listen to both of them all day.

F:  Some hot stuff coming out right now for sure.  Cool man, thanks for your time, good luck with the season and I'm sure we'll be talking again soon.