As I blogged about earlier today, Media Day always signals the start of a new season for us here at the HQ.

It announces the kick-off of training camp, gives players, coaches, writers and all sorts of staff a chance to greet each other before another season begins, and most importantly, gives the media a chance to get to know many of a basketball team's new faces.

As fans know, there are no shortage of new faces on this year's club.

With only Andrea Bargnani, Chris Bosh and Jose Calderon back from last year's training camp, media was out in full force this afternoon trying to ascertain exactly who many of these new faces were and what made them tick.

For us at the HQ, we focussed on many of these new faces in our media work and over the next few days we'll be presenting individual chats with the likes of DeMar DeRozan, Jarrett Jack, Sonny Weems, Antoine Wright, Amir Johnson, Maurizio Gherardini, and gasp...even Marcus Banks!  With the local media swarming Bosh, Calderon and the usual suspects, we decided to take the opportunity to talk to some of the lessor-known folks a bit more and bring you their thoughts on the upcoming season, something you likely won't get to hear from the Star's and Sun's of the world.

However before we get into that in the morning, I thought I'd fire out a few quick evening thoughts from today's media sessions.

-The quote I'm sure that will be on the lips of most of the media tomorrow morning courtesy of Bryan Colangelo:

"I feel better about this training camp and the start and the prepartion that's gone on then I have in a long time, and I've been doing this for 14 previous seasons."

-Even though there was a lot of talk about "getting tougher" at the end of last season, the Raptors ensured that the new players that were brought in to help fill this void are still great guys off the court.  This was immediately evident when I walked past Amir Johnson and he asked if he could help me with anything!  Even Reggie Evans, who will surely be counted on to knock some heads in the paint, hardly looked like the tyrant he's at time been made out to be.  In fact, he reminded me of ex Jays' and A's pitcher Dave Stewart.  He's got that menacing lion scowl but as soon as he starts talking, it's pure kitten.

-BC thinks that this team should be shooting for 50 wins this year.  That's not to say that that's the magic number he's set for wins, but that he thinks for this team to advance to the second round, it probably means a fourth or fifth seed, and to do that, it probably means winning that many games.

-Several players look like they've bulked up from last season.  Bosh of course, but also Amir Johnson, Antoine Wright and even Patrick O'Bryant.  Even DeMar looks bigger then the last time I chatted with him in Vegas.  All good signs. 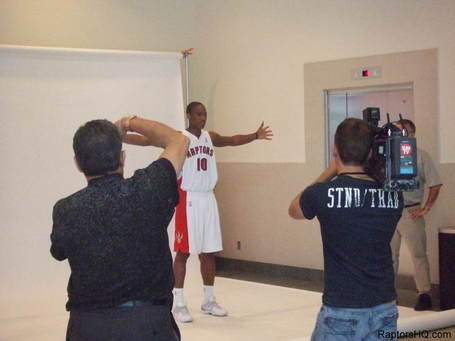 -It's going to be very interesting to see how this whole Bosh situation plays out this year, especially now that the agents of Bosh, Lebron James and Dwyane Wade may all be under the same roof.  BC sounds confident that Bosh will make the right choice and stay in Toronto, but the idea that two or more of these 2003 draft alumnists will be playing together in 2010 seems more and more possible.

-I'm expecting some spirited practices this season, much moreso than last.  Doug Smith this morning mentioned Reggie Evans' work on Andrea Bargnani, something that BC reiterated today, and Colangelo also mentioned a few other pleasant nuances; repeated aerial assaults on the basket in runs last week and attempts to reject said assaults.

-Finally, no Hassan Adams issues this year.  It sounds like everyone reported to camp in great shape (aside from the Bosh and Hedo tweaks) and the early returns (the shoot-arounds and scrimmages this past week) have bore this out.