Share All sharing options for: Belinelli, Douby and some Final Vegas Thoughts

Thanks to Jack, Rasho, Belinelli and other moves by Bryan Colangelo, part II of RaptorsHQ's Vegas look was a bit delayed.  For some light Sunday and holiday Monday reading, Franchise finally brings the second installment along with some thoughts on Marco Belinelli, Douby, and Summer League performances... 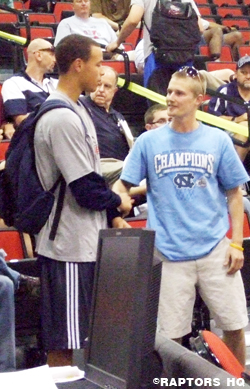 Curry poses with fans and signs some 'graphs

At the HQ, we always dread August a bit.

Usually by mid-July things have quieted down considerably on the Raptors' news front and we're left with little in terms of content for posts.

This summer of course has been a lot different as it's August first already and Bryan Colangelo still appears to have some tinkering to do with his roster for next season.  As a fan, it's extremely exciting to be rooting for one of the most active teams this off-season, and one who's undergone a major facelift even in the past three weeks.  In fact, three weeks ago I was still sitting in the Thomas and Mack Center in Las Vegas!

Since that time, Bryan Colangelo has made further additions to the roster of course, putting together a club that has much more depth than last year, not to mention offensive firepower.

One of those triggermen promises to be the newly acquired Marco Belinelli.  We linked up yesterday with the folks at Golden State of Mind to get their take on the newest Raptor - the general consensus from Warrior fans being that while Belinelli may never become a great shooting guard in the league, Toronto got a useful piece with nice upside for basically nothing.

It was also interesting to see that many folks commented on his breakthrough performance in Summer League last year.  Many may recall that it prompted Don Nelson to prematurely declare him to be his team's starting shooting guard come regular season, something that of course didn't last too long.  This year both Anthony Randolph and Anthony Morrow had breakout performances but this time Nelson remained mum on set roles for the 2009-10 Warriors, even as he sat in the gym with us taking in his team's performances.

So here's a question - just what can you extrapolate from Summer League play?

It's been long held that the only thing one can take away from the event is who "can't play," not "who can."

However that's a pretty vapid description when I really think about it.  There's probably more one can discern from watching league play then those basic premises, and by examining certain statistics, I'm sure one can dig even deeper.

Take a recent post over at Raptorblog.com for instance.

In it, they did a great job of examining certain key stats such as True Shooting Percentage and True Rebounding Rate that tend to correlate well with NBA success.  Examining metrics like these helps to wade through the hype of some of the high-scoring "one-off" performances that we see each summer session.

Let's look at the newest Raptor, Marco Belinelli as an example of this.  I had originally postulated that with Belinelli on board it made sense to cut Douby loose.  However I got to thinking that really, there's nothing saying that Douby couldn't beat Belinelli out for a job is there?  Both players are similar in terms of style of play, strengths and size, with I'd argue Belinelli being the superior all-around scorer and Douby being the better "slasher" of the two.  After all, both were mid to late first round picks just recently and both have had solid Summer League success.

But just how successful was Belinelli's Summer League experience?  Most remember his scoring explosions from that time but I went back and took up his other averages as well:

Yes, the points and 3 point percentage look great, but the other numbers aren't exactly glowing.  And in fact, the scoring is misleading as well.  I went back and calculated his True Shooting Percentage and found it to be an unimpressive 47% over those four games.  So yes, as a volume scorer in a Summer League setting, that's great.  But in terms of efficient use of the shots he took?  Not so much.

Douby contributed more in areas such as rebounding and assists, had a better assist to turnover ratio, and his True Shooting Percentage when I calculated it out was over 10 points higher!

Does this mean that Douby is a lock to get more minutes this coming season then Belinelli?

But I think it does show that you can't again, you can't really evaluate players by hype and limited game footage alone.

And yet in that same vein, I don't feel you can rely solely on statistics to measure a player's true worth, especially in Summer League.  Take Austin Daye, a player many, myself included, thought to be too frail for the NBA level and who was overrated coming out of college.  In Vegas, he was quite dominant, not only statistically but also in person.  There's simply no way to measure Daye's feel for the game and other intangibles.

The one player in Vegas who perhaps to no surprise really stood out both visually and statistically was Blake Griffin.  After Toronto's win against Portland, I headed over to the other arena to catch the second-half of Griffin's debut.

One sequence best summed up Griffin's play in fact; after rebounding the ball in traffic he took the rock up the court before attacking a defender off the bounce near the 3-point line, spinning to the hoop and finishing softly off the glass. 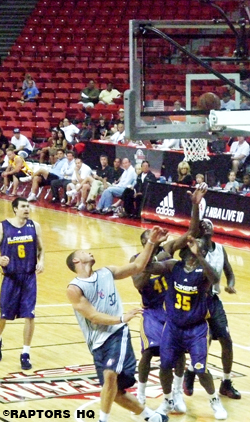 The Clippers actually had one of the most impressive teams that I saw during my Vegas stay fielding great young talent such as Griffin, DeAndre Jordan and Eric Gordon.  Sure, a good chunk of their Summer League team will end up being their actual NBA roster when the season begins, but even with the Clippers recent string of luck you have to think the drafting of Griffin and removal of Randolph has them pointed back in the right direction.

I mean, you know something's going right when your Summer League matches are attracting celebrities like Floyd Mayweather and Clipper Darrell has the Vegas fans on their feet! 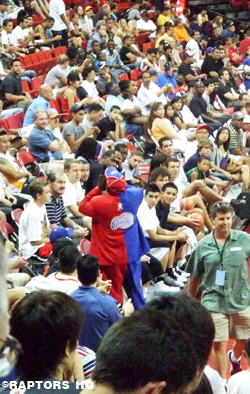 I'll conclude my Vegas thoughts with two quick video clips representing possibly the best and worst of the whole experience.

On the best side, a chance to meet with and talk to various interesting individuals such as Mark Cuban:

On the worst side, the Summer League organizers insisted on rolling out a dance contest at each halftime of each game...complete with skipping music:

While Summer League overall was an incredible experience, the dance-offs were among the most awkward two minutes of my life...