All the Small Things

Share All sharing options for: All the Small Things

Franchise takes a look at the overhaul done by Bryan Colangelo so far and looks at a few more minor tweaks he'd like to see the Raptors make to the roster... 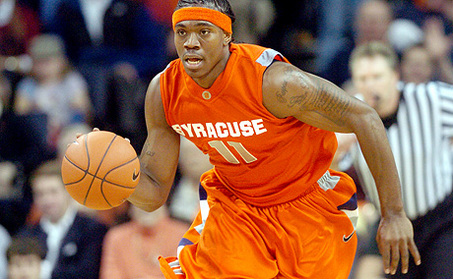 "The one thing I like about what Colangelo is doing is that he's said to heck with it, I'm going to build the kind of team I've always wanted to have with nothing but shooters and ballhandlers, and we'll see if it works or not. The money is high for a lot of these guys and it could be a train wreck, but it's gonna be interesting, that's for sure."

That quote was taken from a chat session Jon Hollinger did yesterday on ESPN.com, in response to a reader enquiring if Bryan Colangelo should now start "walking on water" based on his string of off-season moves.

I found Hollinger's answer to be quite interesting because while it's hard not to be enamored with many of the new faces and names associated with the Toronto Raptors going into next season, there's no way to know just how this is going to turn out.

Will the team lead the league in scoring but also give up 112 points a game?

Can Jay Triano play a style that best fits the personnel BC has brought on-board?

Is anyone going to rebound the basketball outside of Chris Bosh and Reggie Evans?

Really, there are just as many question marks now as there were last season, albeit questions of a different type.

Hollinger has a point though, this team on paper looks to boast one of the league's most dynamic offensive groups; a collection of players who are extremely versatile, who can shoot the ball, and look to hurt opponents from inside and out.  Toronto last year finished 22nd in terms of their offensive rating and we should see a big jump in that respect this coming season.  The diverse skill sets of players like Hedo Turkoglu, Chris Bosh and Andrea Bargnani will be perfectly suited for Jose Calderon's pick-and-roll abilities and others from Jarrett Jack to the newly acquired Belinelli should help as well.

However what happens if the offense goes cold?

There are certainly some streaky shooters in this bunch and if the offense sputters at times during games, there isn't a lot defensively to fall back on.

And even with Reggie Evans and his orcs in tow, this team still seems about as soft as David Ortiz minus the roids.

That's why I'd love to see BC make a few more minor tweaks to this club.

As currently composed, I think we can group the roster into three main tiers; the starters, the bench and the DNP options.

In the starters we've got:

Jose Calderon, Hedo Turkoglu, Chris Bosh and Andrea Bargnani.  I have a feeling that Antoine Wright will be the starting 2 guard when all his said and done due to his defensive abilities so I'm going to lump him in there too.

The second group will probably consist of Jarrett Jack (whom I believe barring injuries and foul trouble will be the club's first option off the bench), DeMar DeRozan, Reggie Evans, Marco Belinelli and Rasho Nesterovic.

That gives a back-up at each spot, some different looks, and some options offensively if the starters can't knock down a shot.

I suspect that Ukic won't see many DNP's and will play the role of the third stringer while Banks and O'Bryant will get the bulk of the DNP's...

Along with Douby, who unfortunately with Belinelli now on board doesn't seem to have much purpose, I'm not sure why BC doesn't divest himself of a few of these players.  Banks might make some sense to keep around for trade purposes at the deadline, but O'Bryant, whose contract for the upcoming season is pittance in the grand scheme of things, needs to go.  The reality is that he couldn't dominate or even exert his occasional will over much less-talented players in Summer League and we're not talking about a first or second-year player here.  This will be O'Bryant's fourth-year in the league!

As for Douby, I think he's got a spot in the NBA still but his skill-set duplicates those of too many other current Raptors.

Really, the top 10 guys are pretty much locked-in and outside of this group, there won't be much playing time for others anyways.  So preferably, I'd like to see Colangelo fill out the final two or three roster spots with some young upside prospects or players with differing skill sets that may come in handy during the grind of the regular season.

Players like Pops Mensah-Bonsu and James Singleton could be slotted into the latter category due to their rebounding and defensive skills while in the former, how about looking at a few undrafted free-agents?  I mentioned a few yesterday in the comments section but I'll reiterate my top 3:

1)  Paul Harris - At 6-6 you might want to lump him into the SG category but I think he can play the 3 in the NBA.  He's extremely long, is a great defender and rebounder, is quite athletic, and he played at a great program in college (Syracuse.)

2)  Wes Matthews - Matthews is quite similar to Harris in terms of size and length but he's a better shooter and shot blocker.

3)  Jeff Adrien - The UConn star might be one of those Leon Powe types; an undersized power forward who despite his physical limitations just knows how to play.  He's a bulldog in the paint as well as an excellent offensive threat and I'd certainly take a flyer on him if I was an NBA GM looking to fill out my bench.

In terms of other options remaining in the NBA Free Agent group, there obviously aren't many game-changers considering how little money Toronto has left to spend.  Maybe BC is intrigued by the shot-blocking skills of Ryan Hollins, the defense of Ime Udoka, the intensity of Mario West, the athleticism and upside of Rodney Carney...who knows?

And as stated, anyone else that's brought in from here on out might not see much daylight in terms of time on the court.

However I think as fans we learned last year that too much depth is never a bad thing.

And considering the offensive expertise that BC has acquired over the past few months, a few defenders and guys willing to do the dirty work would be nice...

...even if they're at the end of the bench and only see time in practice.