Suddenly Delfino Doesn't Look Like Such a Sure Thing...

You gotta give it up for the Legomaster.  Whether you like his offseason moves or not, he sure doesn't stand still for long.  In a move that should be made official today by the NBA, recently acquired Devean George has been shipped to Golden State for Marco Belinelli... 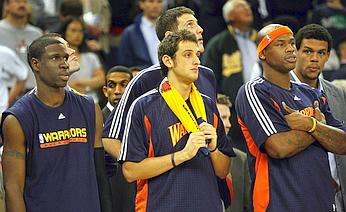 Patrick O'Bryant won't get to spend as much time on the bench with the newest Raptor as he did in Golden State.

So here's the million dollar question early this morning:

Would you rather have Carlos Delfino at whatever price he was asking (presumably between $4M and $5M a season) for three years or Marco Belinelli for one at approximately $1.5 with an option for the following season at slightly less than $3M?

Yesterday evening, when Yahoo Sports confirmed that the Toronto Raptors had dealt Devean George to the Golden State Warriors for Marco Belinelli, that was indeed the question that popped into my head.

I guess to answer it, it all depends on how you value both players, and what you feel each is worth financially.

For instance, I was ok with Delfino returning.  After all, I felt the Raptors still needed some help on the wings and thought he was one of the few productive options that remained via free-agency.

But it depended on the price tag.

In today's NBA economy, especially with Toronto seemingly being the lone bidder for his services, the last thing I wanted to see was a $5 Million deal handed out to Delfino, or any contract that was for over three years.  As one of our readers discussed with me over the weekend, we would rather see Toronto pay extra for Carlos provided the club wasn't handcuffed to yet another long-term deal.

So while I did value Delfino's return, it was partly based on the lack of other options, and partly dependant on his final contract amount.  So if a cheaper alternative presented itself...

In my books that's exactly what Bryan Colangelo has done here, presented fans with a cheaper, and possibly as productive alternative.  Let's look at some stats.

I've compared Belinelli's key numbers from last year to Delfino's from his final season with Toronto below.  I've also added in a few "Hollingeresque stats" to make the comparison more reasonable considering that Marco barely played for the Warriors the past two seasons:

Statistically speaking, it looks like Belinelli is the better offensive player of the two.  Delfino in contrast is a much better rebounder, and generally a more well-rounded player (reflected in his PER.)  But PER isn't immune to playing time and given a good boost in minutes this year with Toronto, rebounding aside I'm not sure Belinelli wouldn't be able to equal or surpass Delfino's other numbers.

And considering that Toronto now gets a test run of Belinelli for a year and possibly a lot less money, this to me looks like a steal.

Devean George wasn't going to play much anyways so his subtraction is no loss.  And in return for George, the Raptors get a player who addresses a positional need, and who fits with the other Lego pieces that Bryan Colangelo is assembling.

Having said all of this, there is I suppose the slim possibility that Delfino still returns.

However I sincerely hope that's not the case.

One of the added benefits of this move is that now there's some extra money suddenly available since Belinelli's salary was essentially swapped for George's.

And whether it be Pops Mensah-Bonsu or (we can dream) Linas Kleiza, there are still some useful players out there who could possibly provide solid returns on that extra loot.