Is Marcus Banks the Key to the Season?

Share All sharing options for: Is Marcus Banks the Key to the Season? 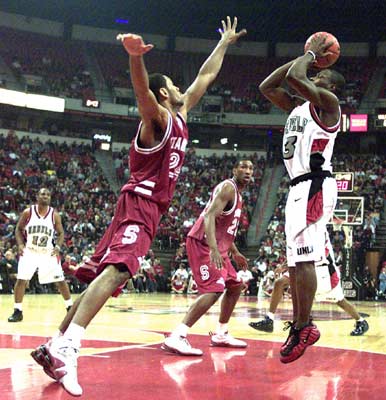 One has to wonder just what's going through Marcus Banks' head right now.

The team he joined but months ago already had two point guards ahead of him on its roster, and now yesterday afternoon, made it official by signing a third, Jarrett Jack.

Is Banks looking at this roster and thinking, "I’m NEVER going to get off the bench?"

Or is he simply lounging at a pool in Vegas somewhere, not thinking about anything except for the fact that Toronto’s newest and latest heralded acquisition is basically making the same amount of money as him for the next two seasons?

As a Raptors’ fan, it’s tough to look at the roster and see Banks eating close to $10 Million in cap space between this coming season and the next.  Toronto has done some major upgrading at key positions and if Banks’ salary and roster spot was up for grabs, the team could probably have pursued additional upgrades to solidify the bench and maybe even starting line-up.

Instead, with only a small portion of the MLE to use and the full, albeit miniscule bi-annual exception at their disposal, the Raptors don’t have a lot of options left.

What’s most frustrating for me though financials aside, is that Jack is essentially a carbon copy of the type of player Banks is, albeit a more productive version.

Both are about the same size and sport similar physical attributes.

Both can man the 1 or 2, and while comfortable running a team (see their individual college careers), both are hardly your prototypical pass-first point guards ala Nash and Calderon.

And while both can score, both can also defend their positions quite well.

Yes, even Marcus Banks when he decides he wants to.

In fact Banks could have been Jack for the Raptors couldn’t he?

Now, the Dinos are stuck with essentially the same type of player instead of having upgrades elsewhere on the roster.  It’s this duplication of skill sets that I felt killed the Raptors last year that suddenly has once more reared its ugly head.  Last year Jamario Moon for all his athleticism and length, was content to pretend to be Jason Kapono and to a lesser degree Anthony Parker.  The Raps HAD guys who could shoot 3’s, they needed someone to get to the hoop off the bounce!

Which brings me back to Mr. Banks.

Even before the season ended last year, I pondered the idea of Banks being the key player on this team going into the upcoming season.

Not key like Bosh or Calderon of course, but key in the sense that if the Raptors can get anything from him this coming season, it could be huge and here’s why.

First of all, the Raptors still look a bit thin at the 2 guard spot.  Suddenly, if Banks can come in and be productive it gives Jay Triano some more options.  As mentioned, I don’t expect him to provide much variety from Jarrett Jack’s game, but even if he could be a factor defensively it would be a huge upgrade over last season.

Second, and more importantly, if Banks comes in and shows he can run the team, make some plays, lock-down some opponents etc, then come trade deadline time, he becomes infinitely more tradeable; especially since by then, he’ll be about to enter the final year on his contract.  This is especially important if the Raptors are threatening to make some playoff noise as Banks could provide the missing pieces to a nice springtime run.

However right now all of this looks like a pipe dream.

I’ve compared Banks to Jack in this post but I’m by no means trying to say that one could take the place of the other right now on the court despite their similarities.  Jack is an excellent pick-and-roll orchestrator, something that should mesh well with Jay Triano’s offence, while Banks is a much more effective player in the open court.  And while Banks sports a fairly solid true shooting percentage, his PER of 7.89 versus 13.10 for Jack last year leaves little to be desired in terms of an outlook for the upcoming season.

So really this falls on the Legomaster now and his coaching staff.

Can they somehow coax a solid season out of Banks, perhaps selling him on the fact that there’s still a back-up spot open?  Really, Jack could be filling the spot behind Jose or whoever mans the shooting guard position so there will still be opportunities even if/when Carlos Delfino comes on board.

I’m not going to say I have my hopes up here, but I do think that getting some sort of productivity from Banks could go a long way in determining just how high this team rises in the East.