An Exclusive Look at Summer League Part I - RaptorsHQ Style

Share All sharing options for: An Exclusive Look at Summer League Part I - RaptorsHQ Style

With Summer League having wrapped up for the Toronto Raptors, the HQ team takes a moment to share some thoughts, photos and videos of their Vegas experience... 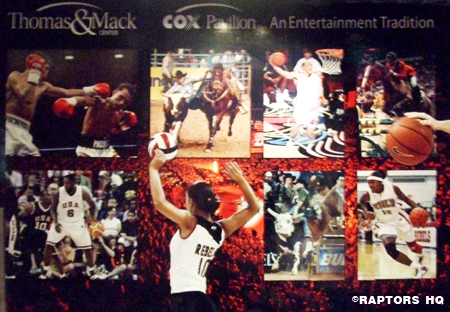 Vegas is one of those places that you can stay for two days and it feels like two weeks.

And conversely, I was there for four nights, probably one more than the recommended length by most, and yet by the fourth day I was settling in and the whole time period of time seemed to have flown by.

For those who have been there you know that's a surreal experience in many ways.

And that's without 7 foot giants roaming the land, with a gaggle of NBA scouts, coaches, agents, GM's, groupies and autograph seekers in tow!

Yes, there were times when I think Howland and I both felt a bit like Alice in Wonderland.

However it was indeed an amazing experience.

To that end, I've tried to put together some raw footage to give our readers an idea of what some of the sights and sounds of Summer League were like.  I realized this weekend that I had enough photos and video for a week's worth of posts so I decided to edit things down to two articles featuring some of the Vegas' highs...and lows.

So let's begin on our Friday arrival shall we?

First of all, Howland and I stayed at the Excalibur Hotel and Casino for the duration of the trip.  Due to the last-minute nature of our bookings, this was the cheapest option and upon arrival, we realized just why.

Sure, there are probably worse places to stay in Las Veags but let's just say this wasn't exactly Caesar's Palace. The pool area was nice, but the hotel itself with its 1970's meets Dark Ages decor and snail-paced service was hardly worth even the price we paid.  However it was at the South End of the strip, closest to the Thomas and Mack Centre where the Summer League games were being played, so we at least figured we could at least save on cab fare.

Arriving Friday afternoon, the two of us got ready for Toronto's first match that evening against the LA Lakers, and headed to the arena.  Below is a quick vid clip of the walk to the Thomas and Mack Centre, which hosts two gyms; the aforementioned T and M arena and Cox Pavillion.  Both are used by UNLV and while all of Toronto's games were played in the latter, I got a chance to check out Blake Griffin's debut later in the week in the former.

A note before we head into the gym - it was ridiculously hot outside.

Despite some of the greenery evident in the albeit shaky hand-held clip above, this is the middle of the desert we're talking about and temperatures reached as high as 45 degrees Celsius some days.  I compared it to pre-heating an oven to broil, and then opening the oven door once pre-heating was complete only to feel a giant wall of heat hit you smack in the face.

This was the situation any time you left a building in Vegas.  It got to the point where I would just start laughing any time I went outside because it was so unreal.

The funny thing is, I prefer that type of heat to the Toronto "muggy" heat any day.  As hot as it got in Vegas, you probably weren't outside for long and even when you were, you just didn't feel like your clothes were melting to become one with your skin.

Upon picking up our credentials and heading inside Cox Pavillion, Howland and we found ourselves amidst a sea of basketball onlookers.  It was mind-boggling as a basketball fan as everywhere you turned, there was a face you recognized.

To our left, NBA.com and "fantasy freak" Rick Kamla.

To our right, ESPN's David Thorpe and David Aldridge.

Directly in front, a casual looking Kevin Martin taking in his team's Vegas entry in the match before Toronto's.

And just about everywhere in between, agents, coaches, GM's and other media members.

Unsure where the media was to sit, we were eventually directed to a courtside section of the bleachers which incidentally held Bryan Colangelo and nearly the entire Raptors management crew; coaches, trainers, video coordinators...with the exception of Jim Kelly you name them and they were there.

We plunked down and waited for Toronto-LA to tip-off...and to get a first glimpse of Mr. DeRozan:

When he finally arrived, as you can see from the clip, he didn't make it far as he was immediately swarmed by fans and autograph seekers alike.

One of the moments that I found amusing right before the Raps' first game began was the playing of the Canadian National anthem.  Yes, makes sense I suppose in that a Canadian team was playing in the league but as you can see from the clip below, the players weren't exactly that jazzed even about standing around for the US anthem.  Patrick O'Bryant looks to be saying "what am I doing here" while Brent Petway looks like he forgot to use the washroom prior to arriving at the arena!

Well I guess it is Summer League after all...

Toronto's first game of course ended in a loss and Howland and I wondered after their performance if the Raptors were going to have a tough week in LV.  The Dinos' entry seemed to be a bit short on talent compared to most of the other clubs in attendance and some of the players we expected to stand out like Roko Ukic and Patrick O'Bryant did so for all the wrong reasons.

However two players on Toronto looked better than expected; the aforementioned DeRozan and Quincy Douby.  Douby played like the NBA vet he is while DeMar showed that perhaps his play towards the end of his career at USC was just the start of something special.  In fact yesterday in his Summer League recap, ESPN.com's Thorpe listed DeMar as one of his top 10 rookies in terms of play in Vegas:

"Smooth and patient, with explosiveness and a sweet jumper. I love how DeRozan rarely dribbled himself into trouble and how crafty he proved to be around the hoop. And he rebounded and defended, too. He looks like he'll be able to contribute earlier than expected."

His defense was a bit lacking at times and he seemed to be grabbing his shorts in need of a breather occasionally but we're talking about the kid's first "real" game action here in a while. 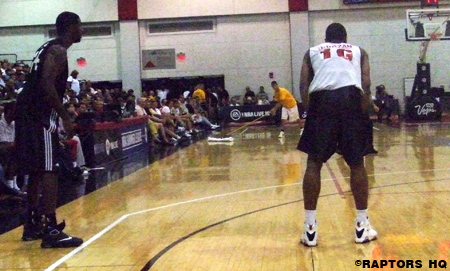 We got to talk to DeRozan of course post-game but the audio in the arena left little to be desired, a problem that plagued many of the media all week but that next year, we'll be ready for.

That evening Howland and I headed to Caesar's palace for some food and nightlife and to no surprise, many NBA players and rookies were out in full force.  At one point Howland and I saw the Gonzaga contingent of Austin Daye, Janero Pargo and Ronny Turiaf strolling through the Forum shops at Caesar's however no Adam Morrison.  Was it possible he had even been shunned from the alumni group based on his play in the league so far?

And when Howland and I ate that evening at the massive portion producing Cheesecake Factory, low and behold, there was Mr. DeRozan and his family having their first Vegas meal as well.

Perhaps more exciting than the sights and sounds of day one for us however was the launch of RaptorsHQ.com version 3.0 later that evening/early Saturday morning.  It was overdue considering we had started working on the re-design plans over a year ago and it was great the next day to finally see things come to fruition.

That ends things for Part I of our Summer League experience but in Part II we'll look at Toronto's next games against Detroit and Portland, Blake Griffin's debut, and hey, even an appearance from Mark Cuban!

PS - Looks like the Pacers aren't going to match the Raptors' offer for Jack, great news for Raps fans.  We'll be discussing more as the week goes on and things become official from the Raptors' side of things.