Share All sharing options for: Jump-Ball: Band-Aids and Dynamite 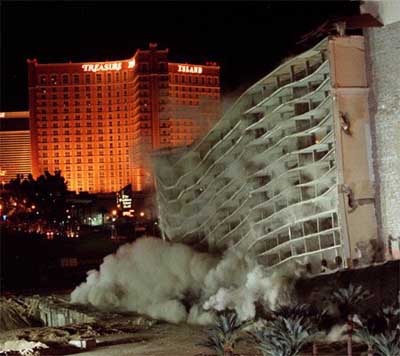 Howland's rebuilding plan for the Dinos...

The Toronto Raptors sit at 23 and 41 with 19 games left in the season.

Gone is the team play that exemplified this club two seasons ago, gone are the playoff hopes, and suddenly Chris Bosh, the franchise centerpiece, might be gone as well.

Just what went wrong? Or more importantly, what should this team do now? A coaching change didn't fix things, and neither did unloading the key off-season acquisition.

To that end, Franchise and Howland jump it off and look at two different perspectives going forward; the tweak vs the blow-up. Howland kicks it off with the TNT version...

Howland: Here's the deal. A team that was supposed to fight with the beasts of the East is now depending on a career D-Leaguer as its number one option off the bench. That should tell you all you need to know unless you prefer to be regaled by stories of injuries, underperforming players, coaching changes and fans cheering for pizza.

So what to do?

The team has more talent than any in the Mike James/Rafer Alston era and yet is on pace for fewer wins. From my end then, it's time to blow things up and why wouldn't you? Have you seen enough from this team to say we are a few minor adjustments away from being a contending team? This team will win less than 30 games this year, so if you think we are a Carlos Delfino and Rasho Nesterovic away from 50 wins you should probably rethink that position.

So what does it mean to blow things up? For me it starts with CB4. I for one have never been a proponent of a team trading its best player but lately I’ve had to re-think that position. BC has a choice to make.

He can deal CB4 this summer and rebuild around Bargnani and whatever assets he brings in (along with a couple of picks), or he can try and make some other blockbuster move (aka trade Bargs)in hopes of doing what Danny Ainge did in Boston. If he chooses to do the latter BC better hope he can catch lightning in a bottle because that is what it is going to take to convince Bosh to stay. In my mind Colangelo needs to make a decision sooner rather than later re: Bosh vs. Bargs. With both players up for big time extensions it's going to be a decision of one over the other or else this team is going to continue to have major needs at the wing positions.

The time for that decision is now.

This is definitely not an easy decision to make but it is one that has to be made. CB4 at this moment is a better basketball player than Bargnani, but his salary demands are going to be much larger as well. Which guy is going to give you the best return on investment over the next few years?

Part of that decision is going to depend on the system and what other players are brought into the equation. One thing is for sure though, keeping both is not an option.

Once this decision is made then you can look at the other guys on this squad, and there are very few guys I want to see back. Outside of Joey Graham and Jose Calderon I wouldn't shed a tear over seeing any other player wearing another jersey next season. These guys just don't win games and BC has to find some guys that can.

Franchise: Wow - for someone who was adamant about not moving Bosh, what changed your mind? I still like some of the things I've seen recently from this club and I'm not sure blowing things up is going to change matters if BC doesn't have some sort of vision for the team. If he wants to play up-tempo then he's finally got some pieces to make it work. Bosh and Bargs complement each other on the court and the past few games have shown that a legit third scorer from the wing position could really make a difference. But that's not to say this team doesn't need some serious upgrades in talent off the bench, but I don't think we're the Sacramento Kings either...

Howland: I whole heartedly agree with the idea that first BC needs to have a vision and stick to it. He has to hire a coach first and then build the roster. I am not saying we should trade Bosh I am simply saying a decision needs to be made as between Bosh and Bargs. As the Capologist said in his recent article, for us the salary cap next year will likely be around $58 million and the luxury tax will be somewhere south of $71 million. If the economy continues to swoon that number could continue to fall. Even if those numbers were to stay the same with both bigs up for an extension/new deal after next year, are you willing to commit upwards of $25-$30 million a year on these two guys? That is likely to be more than 50% of the salary cap. Is that a winning formula? Doesn't look like it.

In order for this team to succeed in the long term BC has to make some tough decisions this summer. No we are not the Kings but we are not far from being the OKC Thunder. We are only six games better than them...the same number of games some people think this team can make up and be playoff bound. Actually I like that OKC Thunder roster better than what is on the Raps right now...

I want to see some decisive, forward thinking moves from the Legomaster. No more stop-gap solutions.

Franchise: I actually think OKC has a better collection of pieces that mesh than we do too...not more talent overall, but just parts that fit with the style they are trying to play.

So my question then is, besides trading Bosh, what else do you want to do in terms of blowing it up?

Couldn't you try to deal Bosh for a true low-post presence to put besides Bosh, and maybe a pick and some additional talent and be off to the races again? Or do you want a full-scale change, from coach on down to Patrick O'Bryant?

Howland: Well I for one was never a big fan of the Marion acquisition and nothing as of late has changed my view. Marion is a system guy and Triano and his staff have not really put a system into place. Now if there was a true commitment to becoming a running team then yes I would be in favour of keeping him, in particular for his defense, but if BC feels like the team he wants to build is more of a half-court team then he can walk for nothing as well.

I guess this season has just really exposed all of the issues this team has, both talent and depth wise. I mean who would you keep?

What I want is to see the team either draft or sign someone who can score off the bounce from the wing position, and create off the dribble, in addition to a legit low-post presence and a real back-up point guard, one that will be a change of pace from Jose. Tall order considering the available funds for sure, but that's not a complete blow-up in any event. Unlike other sports, sometimes in the NBA all it takes is one player to get a team to gel. Before I advocate selling the farm, I’d like to see what comes available via the draft etc.

So ideally next year, what sort of line-up and system do you want to see?

Howland: To be completely honest I don't really care what sort of system the team runs on the offensive end provided they is an approach and the proper players are brought it who can thrive in that particular system. I want a team that plays defense, I want a coach that preaches defense and I want players willing to play some defense. Defense wins championships.

Now of course a run and gun team is fun to watch and I would love a team that could play up tempo offense but not if the team is not committed on the defensive end as well.

Who on this roster do you actually see as someone committed to D? Maybe Marion and Graham.

I just feel with the economy being what it is that there will be lots of opportunity for BC to make some substantial changes to the roster. Teams are in financial trouble and some will be willing to deal players for less than equal value in return. One thing we agree on though is that there is a long laundry list of things that need to be addressed.

No matter what the system a legitimate 2/3 is essential and so is front court depth. The roster could also use a few high draft picks. I guess it is hard for me to envision a line-up until I get a sense of what the team is trying to do.

How do you see things changing or what is best case scenario for you if Parker, Marion and Graham are brought back?

Franchise: So maybe we're not so far apart on this as I initially thought. The bottom line for both of us is that wholesale changes need to be made, although I think you'd like to clear the deck more than I would. I think really the result of this discussion is that we need more info before really being able to break down what this team should do. Where will the Raps be drafting, which free agents will be available, what Bosh wants to do, etc, etc. You can't keep Bosh and Bargs at top dollar and expect this team to get to that next level as you pointed out, unless you REALLY hit a home-run in the draft or via cheap free agency.

BC needs to make a decison about Bosh and Bargs sooner rather than later...

So let's finish off this look forward by looking back, where did things start to go wrong?

Howland: I guess you could point to a variety of things. Maybe you even go back to when BC was brought on and his decision to extend Mitchell. I think BC is definitely the guy to lead this franchise, he just needs to put a coach in place that he feels 100% comfortable with and can develop a true blue print. I can't believe I am going to say this but I think Dave Feschuk has a point when it comes to BC, he has not come up with a plan and stuck with it. I think at the end of the day that is why we are in the position we are.

He sure has his work cut out for him this off-season. What happens this summer will have long term consequences. He can't strike out.

Franchise: I personally think things went awry when Kapono was signed. That signified a commitment to a jump shooting club and it robbed the team of precious financial resources with which to upgrade the club's athleticism. After that, I think BC overvalued a number of his assets and when the bottom started to fall out, he wasn't left with much to work with.

In any event, there's no question this club needs to make changes this off-season, and the key to the changes starts and ends with what BC does with Chris Bosh.