3 In the Key – Toronto Raptors Game Day Preview vs. Miami

Share All sharing options for: 3 In the Key – Toronto Raptors Game Day Preview vs. Miami

I’ve been away since late last week and my destination didn’t have TV, internet or blackberry coverage. It really was a "break". When it came to my following of the Raptors it literally came to a standstill - there was no checking box scores, reading the recaps from Franchise or Vicious D or even the occasional highlight. To be honest, it was nice to step away from what has been a rather tumultuous season.

I would be surprised if many of the Raps players wouldn’t like to take a real break at this point either.

Upon my return it was pretty clear that I hadn’t missed much in Raptorland except another handful of losses and the signing of Mensah-Bonsu. The Raps continue to be 5 games out of a playoff spot and are the second worst team in the Eastern Conference. I really didn’t expect anything different and I was far from being pleasantly surprised.

Being away and enjoying the break from all things Raptors made me realize just how taxing this season has been for us fans. There have been difficult seasons in the past and difficult situations, but this season just leaves a bad taste in your mouth. When we look back on this 2008-2009 season there will be very few highs and a ton of lows. It’s been a long and grueling year…and there remain a handful of games to go.

There is nothing worse as a fan than throwing up the white flag when it comes to your team, in particular with a good chunk of the season left. I should know, I have done it the past two Rams seasons. I will continue to watch the games from here on out, but there will be little enjoyment from doing so. I am sure some of the guys will continue to put out good effort but it really is an exercise of going through the motions.

With that being said there are still a handful of games that I am looking forward to watching. Tonight’s match-up against the Miami Heat is definitely one of them and for obvious reasons.

If there is one thing this season will be remembered for it will be the failed JO experiment (and possibly the failed Marion experiment as well). The ramifications of this "failure" are still to be determined (CB4) but it really will be what defines this year. In his time in Toronto Jermaine did some good things on the court but the results, or rather wins, didn’t follow. Whether it was due to injuries or otherwise, the O’Neal/Bosh pairing was far from being the next coming of Robinson/Duncan (which in hindsight was a comparison not worth making as Duncan and Robinson are sure fire Hall of Famers).

The money issues aside I was a big fan of O’Neal. His interior presence, physicality and general demeanor on the court were all things that had been missing on Raptors teams of the past. O’Neal gave the Raps their first legitimate true center in years. In the past three games it is clear how badly the Raps are missing JO, or at least what he brought to the table. Opposing teams have essentially set up camp in the paint and scored at an embarrassing rate. There is no-one to truly make opponents fear the heart of the Raptors defense.

I can see Dwyane Wade licking his chops right now.

One of the many reason’s why JO was deemed expendable by BC has to have been the development of Bargnani. Albeit their styles of play are completely different, this season Il Mago has finally produced, while playing the 5. Much of the credit for this emergence has been given to his commitment last summer. In fact it was JO who was one of the first to talk about Bargnani’s abilities starting to shine through. All this said, even with the development of Bargs, moving JO has still left a glaring hole in the front court and one that cannot be filled by any other big currently residing on the Raptors bench.

Well now the two of them get to go head to head and this match-up is definitely one of tonight’s keys. 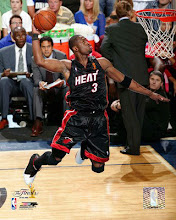 No Raps D tonight will mean lots of this.

1. Slowing O’Neal – This is not just another game for JO. He was cast aside, was essentially the scape goat for the Raptors season and his enormous sense of pride will ignite a fire inside him. O’Neal is going to want to take it to the Raps and it will be up to Bargnani to help prevent that from happening. It’s a battle of two totally different styles. Quickness vs. Power. Traditional vs. New Age. JO is still capable of going for 20 and 10 but he can also be neutralized. Look for Bargs to force him to the perimeter and use his quickness to blow by him and cause foul trouble. I for one would like to see Bargnani try and establish a post-presence but I won’t hold my breath. On the flip side if O’Neal starts abusing the Raps front court there will likely be no stopping the Heat because when Wade gets help the Heat can play with anyone.

2. Clog the Paint – When Triano first took over the team the defensive philosophy clearly changed with the emphasis being put on stopping penetration. I am not sure what happened to that game plan but it better re-appear tonight or Wade et al. are going to take full advantage. I can live with another loss if Wade is lighting it up from the outside but it will be rough to watch if Wade, Beasley and yes even Jamario Moon start abusing the rim like they did in their last game against the Phoenix Suns. If the Raps don’t play any sort of defense the Heat can put up points in bunches.

3. Run, Run, Run - I originally had this as the second key to the game but the reality is if the Raps don’t bring any hustle on the defensive end it won’t matter how they play offensively. If the Raps do play some defense they need to get out and run. JO and Haslem are not the most agile big men and if Bosh can get the ball with good position early in the shot clock good things will happen whether it is getting to the line or finding open shooters.

Now if the Heat do manage to get back the offensive strategy is a simple one, pump fake Moon and watch him fly by as you step in for the easy uncontested J. We all know that works every time.