Share All sharing options for: Tip-In: Toronto Raptors Post-Game: Close But No Cigar 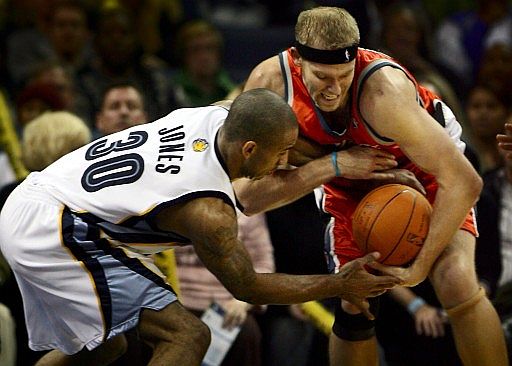 Without Bargs this is the Raps starting center. Ugh.

Well for a fan desperate for a win, that one stings. Watching this team fight and claw all game long only to lose in overtime was tough to watch.

When word came out prior to the tip that Andrea Bargnani had "flu-like symptoms" I definitely expected a blow-out in the Pistons favour. Even if Bargs could go, without him at 100% I didn’t think the chances of a Raps win was very good based on the Raptor’s play as of late and the complete lack of depth up front. When Bargs left the game early I was pretty sure that was going to sink the Dino’s battleship.

Well, I was wrong and much to my surprise the Raps didn’t just pack it in when the chips were stacked against them.

Despite losing the game the Raps actually played pretty well, in particular Jose Calderon. Calderon, who has been unfairly thrown under the bus by many fans as of late, finally looked like himself and he put on a solid performance both offensively and defensively.

On the offensive end Calderon attacked the rim time and time again and created opportunities for both himself and his teammates. It was his ability to create for others that allowed him to overtake the much loved Alvin Williams as the Raptors all-time assist leader. What is amazing is just how quickly he managed to take top spot on the all-time list. Calderon now has more assists in 275 games them Williams had in 417. That’s an impressive accomplishment.

Despite the historic moment it is really Calderon’s defense that deserves some fanfare. Being injured for the majority of the season Calderon has been a liability on the defensive end more often then not, but tonight he looked like a man possessed. Whether it was moving his feet, standing in for the charge or just using his hands to deflect the ball and disrupt the offense Calderon had a great defensive game.

I wasn’t just Calderon who played better defensively either. Early on all of the Raps were getting after in on the defensive end and frustrating the Pistons. A lot of that defensive intensity was coming from the Raps second unit. Although not the most skilled group, players like Pops Mensah-Bonsu and Roko Ukic brought great energy to the floor and were key in helping the Raps build a solid lead by halftime. It was one of the better halves the Raps have played in a while.

Of course as per usual, the Raps were unable to hold it together.

At halftime the message to the players was clear – come out in the first three minutes and maintain the lead. Well the Raps, to no-one’s surprise came out and let the Pistons right back in it. Actually let me re-phrase that, the Pistons started to take over. At the beginning of the third quarter the Raps were up 5, but by the end of that same quarter they were down by 10.

It was during the third quarter when it became evident just how much this team was missing Bargnani. Without Il Mago the Raps front court is rail thin. Without his starting center Coach Triano was forced to start Jake Voskuhl at the center spot in the second half and the results were poor. This is the difference between the Raps and a team like the Pistons. Without Bargs the Raps have to bring out a UCONN grad that probably wouldn’t even come off his alumni’s bench in the upcoming NCAA tournament while the Pistons, without Rasheed, are able to play guys like Jason Maxiell.

Where would the Raps be without this guy?

That being said it’s frightening to think just how bad this Raptors team would be without Mensah-Bonsu. He is the definition of controlled chaos. He is an interesting player in that he is high energy but yet still plays under control (for the most part). He is not overly talented offensively but he does is still effective. His high energy is a huge asset to the Raps at this point in the season and he is easily earning himself at least an invite to someone’s training camp next year if not a guaranteed deal. In a short time he is proving his worth.

Led by Mensah-Bonsu once again it was the second unit that helped the Raps make up the 10 point deficit in the fourth. The Raptors bench continued to cause the Pistons problems and helped put the Raps in a position to tie up the game late on the Calderon drive. Unfortunately in overtime there was just not enough gas in the tank. In the extra session the Pistons simply executed better and with a quick 7-0 run put the Raps to bed.

On a whole the Raps showed some life which was more than I expected on this evening. It was nice to actually have something to cheer for and hopefully this team continues to fight as the season wears down.

If they play like this going forward they have to snap this losing skid…don’t they?