Money for Nothing - The Raptors' Salary Cap Situation

Share All sharing options for: Money for Nothing - The Raptors' Salary Cap Situation 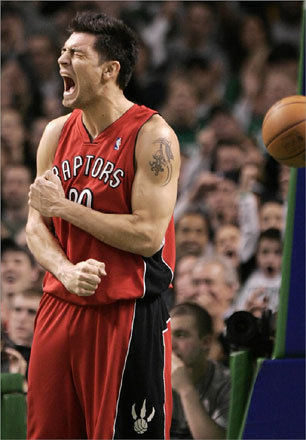 As the capologist points out, BC may have a tough time bringing back Delfino...

It is safe to assume that Bryan Colangelo, the rest of the management team, and MLSE are not thrilled with the Raptors’ current roster.

Knowing this and that Colangelo is never shy to move players around, like most Raptors fans, I would not be shocked if the team makes one or more trades/sign-and-trades in the off-season. However, I would also not be surprised to see a nearly identical team on the floor either to start the 2009-10 NBA session. It is becoming more and more likely that the Raptors will add a lottery pick to the roster, but Colangelo finding trades that he likes is far from a given. Fans better hope that the current group is able to grow and improve significantly next year, as the financial situation is slowly stipulating that they would be the core of the team.

Because there just ain’t a lot of money to go around.

At first glance, considering that Marion is a free agent and that Marcus Banks will cost considerably less than J.O. would have next season, not having any money to spend may seem confusing. In fact even if readers have heard BC say that the team does not have a lot of money to work with other than re-sign current players, they may feel that he is blowing smoke.

Unfortunately it’s a reality and I will do my best to explain why this is, and outline some of the key points that will affect Toronto this off-season.

Despite some speculation that the salary cap and luxury tax threshold levels will decrease next season, nobody knows what the numbers will be. They are both related to Basketball Related Income. The economy is obviously not great, but basketball is becoming more popular around the globe which means more money. I would bet that the salary cap and luxury tax, two figures that typically climb each year, will remain close to where they are now (whether there is an increase or decrease). I believe that the luxury tax number will be more important to Toronto than the cap. Whatever the cap is, the Raptors will be just under it in terms of "real dollars committed". It is important to know that the money they have already committed is not the only thing that affects their cap-space. Some salary cap technicalities are bound to put the Raptors over the cap before the free-agency period even begins.

With the addition of Patrick O’Bryant, the Raptors have $47,373,371 owing next year in guaranteed contracts. If they exercise a very affordable option on Jawai, they will owe $48,109,791 to the following 9 players: Bosh, Calderon, Bargnani, Kapono, Banks, Humphries, O’Bryant, Ukic and Jawai. This year’s salary cap and luxury tax threshold were $58.68 million and $71.15 million respectively. At first glance, it looks like Toronto would have just over $10 million to spend on new players if the cap were to stay the exact same. Unfortunately, this would not be the case.

Toronto is sure to begin the free-agency period over the cap, unless they renounce their rights to re-sign all of these players: Shawn Marion, Anthony Parker and Joey Graham. Free-agent salaries that are not renounced are automatically added to a team’s total salary commitment. There are formulas based upon a player’s years of experience, and whether they made more or less than the Mid-level Exception in the previous season determines how much they count against the cap until they actually sign. Once the player signs, these "cap holds" are removed and the player’s actual starting salary is added on to the team’s "real-dollar commitment amount".

Let’s explain these "cap holds" a bit more then.

The rules of the collective bargaining agreement state that "every NBA team must always have at least 12 players taking up cap space." Marion’s cap hold counts for about $20 million, Parker counts for about $9 million and Joey Graham counts for about $4 million. Add these numbers on to the Raptors total of about 47-48 million and you are at around $80 million. Fortunately, these players would be re-signed for a lot less than $33 million, if they are all brought back. But you now get the idea of why Colangelo after the O’Neal trade wasn’t throwing around numbers like $20 Million in cap space cleared. (For a good breakdown of cap holds as they affect a team trying to get far under the cap like the Knicks, click here.)

Add into the mix that Toronto has the right to re-sign Carlos Delfino (a very real possibility based on Colangelo’s post-O’Neal trade conference call) if they want, and the bottom line is that the Raptors will be functioning as if they are over the cap.

In addition to the free-agent cap holds being added to the total, the value of the Mid-level Exception (MLE) and Bi-annual exception will most likely be added to the Raptors total as well. The MLE should be around $5-6 million and the bi-annual exception will be worth $2 million. The Raptors would lose their right to use these exceptions should they choose in advance to tank next year by filling their roster with league-minimum contracts, thus keeping their total salary under the cap. Toronto could also choose to renounce their rights to the exceptions. Both of those scenarios are unlikely though, especially the former considering the team next year probably needs to do the exact opposite of tanking in order to entice Chris Bosh to stick around. It is more realistic that the Raptors will look to re-sign at least one or two of their upcoming free-agents which would put them in a position to use their exceptions.

Whether or not Toronto uses its exceptions will depend upon how much it costs them to resign their free-agents of course, and whether or not they are willing to pay into the luxury tax. Let’s assume however that the Raptors are unwilling to venture far into luxury tax land, and to simplify things we will imagine that the luxury tax level is the same next year as it is now.

With Jawai on board, the Raptors would have roughly 23 million dollars left to spend before getting "into the tax". Since they are going to be considered to be over the league salary cap based on our previous breakdown, Toronto can only really spend this money on some combination of Marion, Parker, Graham, the upcoming draft pick, and players signed using all of or some of the MLE. Could they do all that with so little money?

Since it looks like there will be very few shoppers this off-season, it is possible.

Looking around the league, Detroit should be well under the cap, but they have to decide whether or not to re-sign AI and Rasheed Wallace. If they sign both of those guys, they could have over $50 million spent before bringing back any of their lesser free-agents or signing anyone new.

Atlanta is over the cap unless they renounce their rights to re-sign Mike Bibby. And most other clubs don’t have much wiggle room, or likely won’t want to use it in hopes of cashing in on some of the bigger name free-agents the following summer.

The two real wild cards are Memphis and OKC. After signing their draft picks, both teams could have a significant chunk of change left to spend on free agents (both teams currently have less than $40 million committed). Other than those 4 teams though, it’s going to be tough barring trades for other teams to be significant players in the free-agent market, especially with the economy and teams looking to cut costs. Hopefully, none of the potential buyers have a strong interest in Marion, the only Raptor that would possibly command more than the MLE. There should be a bunch of other talented free-agents out there, (here is a complete list as of February 24th) so hopefully nobody makes a hard play for the Matrix if that’s indeed who BC would prefer to re-sign. If no other team does make Marion a huge offer then, assuming money is important to Marion, he would pretty much be forced into re-signing with the Raptors for little more than the MLE.

It is possible that Marion could be re-signed to a contract with a starting salary of about $7 million so let’s work with that number. How much the Raptors would have left to spend would depend on what draft pick they end up with. It will cost them somewhere between $1.75 million (14th pick) and $4.983 million (1st pick). I am going to dream big here and look at the worst-case scenario financially, with the Raptors therefore landing the 1st pick. That means that the top pick and Marion are signed for next season at a combined price of $12 million. Based on our previous breakdown, that would leave roughly $11 million dollars on the table to bring back Parker, Graham and a few other players to fill the roster. Again, given that not a lot of teams have money to spend, perhaps Parker and Graham could be resigned for a total of $7 million or less as currently they are taking in about that much this season. That would give Toronto 13 players with about $4 million left to spend, and would probably mean having enough money to lure Delfino back and bring in a "league minimum" player to complete the 15-man roster. If Colangelo can do a good enough job with his own free-agents, than the best case scenario would be having some extra bucks to use to out-bid teams for the services of a defensive big like Chris Andersen so the league-minimum wouldn’t even come into play. The "league minimum" amount (say for a veteran ala Rasho Nesterovic) increases with years experience, but the league picks up the tab on anything above $825,000 in order to keep marginal veterans employed.

The scenario suggested above may not play out exactly as suggested, but barring any trades it would likely be something similar to this. And since the Raptors can only go over the cap to re-sign players, sign draft picks, sign players using the MLE/BAE, barring significant trades – you will not see a lot of new faces.

I am just hoping that they wisely spend the $20-25 million that they should have available.

Given that nobody else has much money, I will consider Toronto to have done very poorly, if they cannot at least bring back Marion, Parker, Graham and a talented draft pick without leaving room for more help. I believe they should be able to do this and still have a few million left to spend on Delfino or a similar talent using part of the MLE. My choice would be Trevor Ariza, but I will leave the analysis of player talent up to my confederates at the HQ and more knowledgeable posters.