The Importance of DeMar DeRozan

Share All sharing options for: The Importance of DeMar DeRozan

On a day away from previews and recaps, Franchise looks at the impact of DeMar DeRozan to date and discusses how integral he is to the success of the Toronto Raptors this season...

Around noon today the Toronto Raptors will be unveiling their newest jerseys, retro "Huskies" uniforms meant to comemorate the 1946-47 Toronto Huskies basketball club.

These jerseys will be worn during six home games this season as part of the NBA's Hardwood Classic Nights and of course, as part of the Raptors' ongoing 15 year celebration.

Participating in the jersey unveiling, which we'll be attending, will be two current Dinos; Hedo Turkoglu, and the focus of this morning's post, DeMar DeRozan.

As most readers know, DeRozan wasn't my top choice for the Raptors this past off-season in regards to the draft.  He did hover in our top prospect rankings most of the season, but there were other players, most notably Gerald Henderson and Terence Williams, who I would have preferred the Raps took a shot at with the ninth overall pick.  I just wasn't convinced that DeRozan, apart from being an excellent athlete, had enough dominant basketball skills to be an impact player at the next level.  Sure he was good in a number of areas and as mentioned, quite athletic, but the NBA draft is littered with countless "athletes" who never could put it together once they reached the big show.

And up until last week, it was hard to argue that DeRozan wasn't falling into this same realm.

Yes, he was starting for the Raps, but the team was hardly looking like a playoff contender and DeRozan was averaging only 6.6 points and 2.6 rebounds while shooting a slightly clunky 44 per cent from the field.  His PER was an underwhelming 12.69 (the league average is 15), and for someone with his athleticism and "hops," his rebounding and defensive metrics were quite poor.

Prior to the start of the season I had identified two players as being the biggest X factors this season for Toronto; Andrea Bargnani and Mr. DeRozan.  I felt that solid and consistent contributions from these two could really elevate the club's playoff potential simply because both added very unique elements to the team, ones that were essential for on-court success in this league.

In DeRozan's case, it was his ability to get to the rim and create off the bounce.  At USC, DeRozan was a handful for opposing guards in this capacity and as the season wore on, he became more and more aggressive in terms of attacking the basket.  It was this attribute, in particular from the wing position, that I was extremely interested in this season.  Since Vince Carter's departure, the Raps have lacked a player who could do these sort of things and in today's NBA, I thought it critical to have this element in the starting line-up.

Put it this way; of the recent NBA champions, have there been any without an athletic 2 who could create his own shot with the clock winding down?

Maybe Detroit; but they seem to be the caveat to every question like this regarding past champs.

For Toronto to not only return to the playoffs, but to push past the Vegas-set 42 win plateau, I felt it essential to get this sort of offensive attack from DeMar.

Unfortunately as mentioned, DeMar's production was hardly anything to write home about early in the season, to the point that it seemed inevitable that with the Raptors' struggles, he'd be one of the first to be replaced in the starting line-up.

But then a funny thing happened.

Despite being blown out in Atlanta, DeMar had one of his best offensive performances of the season, scoring 21 points.  In that game, he got to the free-throw line 12 times, and even when the game was well out of reach for the Dinos, he continued to be aggressive in going to the basket.

This carried over to the next two games as well, both wins, where DeRozan put up 16 and 11 points respectively, and in both matches, helped set the tone early by attacking the hoop and throwing down some vicious dunks.

There's no clear win correlation yet, (the Raptors are 3 and 5 when DeMar averages 10 or more points), but I feel that as the season goes on, one thing will become obvious; when DeRozan is scoring off the bounce and attacking the basket, this Raptors team takes a giant step forward in terms of potential.

Suddenly, with DeRozan drawing defenders into the paint, the Raptors' plethora of outside bombers are free for open looks off of kickouts, and instead of being the primary offensive focus, Chris Bosh is free to use his new low-post mojo to finish any of DeRozan's misses. 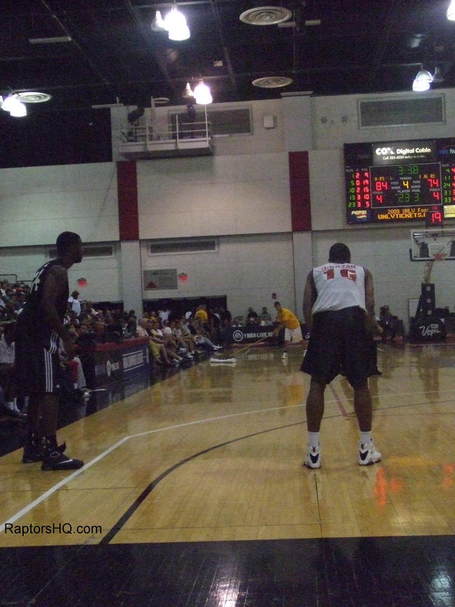 As well, in a league where many of the top offensive threats reside at the 2, suddenly Toronto is able to ensure that these shooting guards aren't conserving themselves at the defensive end, something which has been the case in the past.

And that's not even getting into DeRozan's ability to ignite the crowd or his team with a highlight-reel flush, something that can't exactly be quantified with any sort of metric.

Am I expecting DeRozan to play like gangbusters each and every night now from here on out?

The Vince Carter comparisons were over-blown as in many ways they are very different players, and I expect like the majority of rookies, his first season will be a series of highs and lows.

There's already some solid talent on this Raptor team so they don't need a VC type rookie performance to carry the club.  If the Raptors can simply get a sustained and aggressive offensive attack from the rookie, this will be a huge boost for Toronto.

Already this month, DeRozan has gotten to the free throw line 22 times compared to 32 for all of November so indeed it looks like he's heading in the right direction.  If he continues this level of aggression at both ends of the court, and shies away from the forced jumpers, that's really all TO can ask for this season.