Although most probably guessed this would be an easy 0 and 1 start for the Raps, Toronto powered through Lebron James and the Cleveland Cavaliers in a 101 to 91 victory.  Franchise gives his thoughts...

Don't ask me why, but I felt the need to start this recap with the following clip:

Is it a message from the collective Raptorsnation to the rest of the league?

How about a message from me to me, considering I picked the Cavaliers to dominate last night's match-up?

Last night playing with a mix of controlled swagger and confidence, not seen by myself from a Raptors ballclub in over a season, Toronto took down the mighty Cavs early, and never really looked back.

On top of this, it's hardly like there was only one thing that Toronto did right.  The reality is, the team gave the Cavs fits it many an area and offensively, looked a lot like the juggernaut many predicted.  To use an old boxing expression, at times Cleveland looked like they had been hit so many times with the right jab that they were begging for a left!

-Toronto shot 45 per cent from the field while at the same time, limited the Cavs to 35.

-Toronto hit on nearly a third of their 3-point attempts (a huge improvement over pre-season.)

-Toronto got to the line an impressive 37 times, hitting on 28 of these attempts.

-And finally, Toronto turned the ball over only 13 times, looking much more like a well-oiled offensive machine then they did in pre-season.

Top these offensive stats off with the fact that the Dinos held their own on the glass, and did a nice job on the defensive end, and it's pretty hard to find much to complain about.

My one cautionary tale in fact might be for Cleveland fans.

This is two nights in a row that this club looked incredibly underwhelming, in particular when Lebron wasn't in the game, and sitting close to the Cavs' bench last night, I had to wonder if this club was even a top 3 seed in the East.  There just isn't much besides King James on the roster, especially from an offensive standpoint, and I'm pretty confident the offensive issues the team experienced last year against Orlando in the playoffs will rear their ugly heads over and over.  Mike Brown is a great defensive coach, but I felt he got out-schemed by Triano, who did an impecable job of doling out minutes and moving players in and out depending on the situation.  To that end, he played 10 players, but gave two, Amir Johnson and Rasho Nesterovic, only short bursts based on game situations. 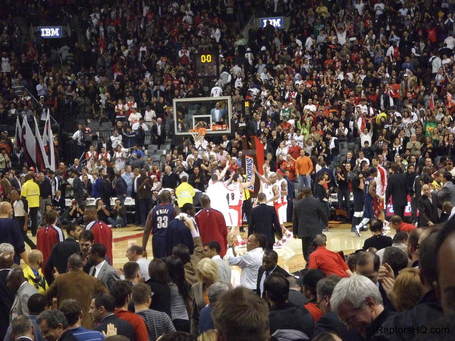 Sure, much like pre-season, it's only one game (after all, I probably wrote a similar recap to last year's opening night win over Golden State), however as mentioned, there was a lot to like from a Raptors' fan's perspective, a lot more than you saw most of last season.

And considering the tough schedule that remains, I think us fans will take this W and run with it...

...at least until tomorrow night in Memphis...