While Giles had a tough college experience, could he get his career back on track with the Raps?

So for those who got to see it yesterday, what did everyone think of the Raptors’ loss to the 76ers?

It was nice to see Toronto finally on a big screen however my first question is, "how do you lose a game when you’re up by 5 with under a minute to go, and you have possession??"

Well, some of it you can blame on refereeing. Some suspect calls to close things out, in particular the bizarre "push-off" foul call on Jaycee Carroll which would have iced the game for Toronto, but on top of that you have to look at some poor decision-making by Toronto, and some porous defence as well.

However of Toronto’s first three games, their play against Philly was the best I’d seen the squad play so far and in reality, they were up against a much more talented team.

Joey Graham lead the way again scoring-wise with 17 however he was not nearly as efficient as he was in previous contests. It took him 18 shots to get his 17 points and he had eight fouls too. CJ Giles had a double-double with 13 and 12 and Hassan Adams and John Lucas Jr. also had double figure scoring games for the Raps.

Unfortunately, the main player I wanted to see, Nathan Jawai, didn’t see a single minute of action so I was relegated to catching him in low, low-def a bit later in the night via NBA.com’s live feed, in a game that saw Toronto beat the LA Lakers 89 to 71.

Jawai actually got the start in this one and actually looked pretty solid by all accounts. It’s at times a bit tough to really get a good idea of how players are playing when you’re viewing via the .com live feed, but Jawai definitely stands out because of his size. Nevertheless, the Aussie Shaq showed some soft touch around the hoop and some hustle on the glass finishing with eight points and six rebounds in 24 minutes of action. What impressed me even more though was that he only picked up four fouls during that time, something that smaller and more senior members of the squad like Graham and Adams have struggled to do.

Speaking of Adams, he had another solid game for Toronto in this one filling the box score with eight points, seven rebounds, four assists, and three steals. Adams is actually one of the top 3 in Vegas in terms of steals per game and while his offensive package hasn’t exactly blown me out of the water, it’s his defence and intangibles that really bode well for him next season.

In fact it’s interesting now that Toronto has played the majority of its games via the Summer League to compare and contrast Graham and Adams as in many ways, they are exact opposites.

Graham is definitely the more talented of the two. He has a bruising physique, is quite athletic, and dominates in these settings simply because of his superior physical qualities. However he’s still the same Joey Graham that barrels through players therefore getting called for offensive fouls. And he’s the same Joey who despite his size and strength, far too often tries to avoid contact at the rim or looks to lay the ball in instead of dunking it.

His first basket against Philly was a perfect example of this. What would have been an easy dunk became a much more difficult double-pump lay-up in effort to avoid contact. Yes, he made the play, but the smart thing would have been to hammer it down. Even his highlight reel dunk on Jason Smith late in the fourth quarter was essentially an open path to the cup and I’d still like to see Joey do these types of little things, the type that will make a big difference in NBA settings.

Hassan Adams on the other hand does these little things. He gets in passing lanes, blocks and contests shots, is quicker on his feet defensively, and just seems to know where to be on the court at all times. His jumper is shaky, and I’m not expecting him to light it up next year off the bench offensively, but it should be a real battle between him and Joey in terms of who gets the ninth or 10th man minutes. Right now I think Adams actually has a slight edge but both should get good shots with Toronto’s trimmed-down roster next year.

So what about the rest of this squad, could we see someone like CJ Giles filling a 13th man role next year?

Well the Raptors still only have 12 players under contract so it’s certainly not out of the question. The primary need however is still for some more help at the 1-2 so Giles doesn’t fit that description. However when you watch him play (and unfortunately for viewers he got the night off against LA), he’s one of these players who you can’t help but think Toronto should take a flyer on before some other team does and potentially reaps the benefits down the road. As I mentioned in my original break-down of his game, Giles was definitely one of the most interesting players on this roster, simply based on his size and defensive abilities. He’s shown so far that he knows how to use these base tools and in my books he’s been Toronto’s best player after Graham. Considering his age and that he could probably be had for cheap, I’d like to see him as one of the guys who fills out Toronto’s roster. Instead of a Maceo Baston type, Giles could be primarily a practice player and would learn first-hand from two incredible talents in Bosh and O’Neal.

However what might really be the deciding factor in any final transactions is of course the almighty dollar. If Toronto decides that spending whatever they have left on another point guard is the way to go (and who knows how much money they have to work with) then Giles might be out of luck.

And can Toronto get that final point guard or combo-guard from their Vegas league roster? I still so no however I’d like to see Daniel Ewing get some more minutes. I thought he played much better than Lucas in terms of running the show against Philly but once again it was Lucas who got the crunch-time minutes. And against LA last night, Ewing was back to playing under 15 minutes and splitting back-up point guard duties with Jaycee Carroll.

Hopefully against Golden State tonight in Toronto’s final game, we’ll get to some more Ewing and another dose of Giles. The Warriors are loaded with young talent like CJ Watson, Marco Belinelli, Richard Hendrix, Anthony Randolph and Brandon Wright so it should be a fun match to watch. Watson is actually someone I’d love to see Toronto steal away from G-State as he’s a scoring point guard with a great college background. Unfortunately he’s got a year left on his contract so probably isn’t going anywhere.

But that’s the type of player I’d like to see Toronto grab and if not Watson, perhaps another summer leaguer like Jamont Gordon or a more experienced back-up like Bobby Brown.

Or…with the rumours that Keyon Dooling is close to being dealt in a sign-and-trade to the Nets, perhaps Marcus Williams now pops back up on Toronto’s radar? 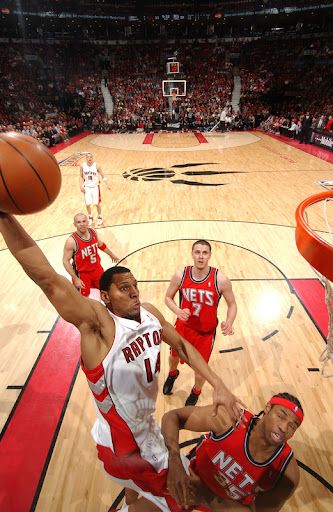 Instead of dunking ON the Nets next year, could Graham be dunking IN a Nets jersey?

Two years ago of course Bryan Colangelo did everything in his power to grab Williams and with the Nets now holding 16 contracts and Toronto 12, a two-for one trade would make a lot of sense for both clubs. Two ideas that work financially and which would address needs for both clubs include:

1) Josh Boone and Marcus Williams for Kris Humphries and cash.

Yep, looks like a steal for the Raps on paper as Boone would give Toronto another rugged rebounder up front to replace Hump and of course Williams as well. However with the Nets simply looking to cut costs and currently having a surplus of "bigs," I’m not sure they wouldn’t do this, especially if Toronto was to throw in a second-round pick or a small cash incentive. On top of this, we've already seen much more ridiculous plays to cut personnel costs so far this summer, see this gem of a take on the Camby trade for instance, so who knows what lengths the Nets will go to to appease the accounts. The reality is that of New Jersey’s front-line players, they just acquired Yi and Najera so they’re not going anywhere, Stromile Swift’s contract is too large for Toronto to take back, and Brook Lopez and Sean Williams are probably their most coveted front-line prospects after Yi which leaves Boone.

Instead of a two-for-one, a three-for-two would work as well depending on the final numbers of CDR’s contract. If it comes in at about the same amount as Ryan Anderson’s deal, then this should work cap-wise. At worst, the Raptors once again may need to throw a little cash in to help facilitate the deal.

Such a trade would leave Toronto with a nice little roster when all is said and done without having to take on excessive contracts or financial burdens.

And, Toronto could still grab a player like Giles for depth if they so desired.

And on the Nets side of things, they trim their roster and the longest contract they take on is that of Humphries, which expires the season after next. Admittedly neither trade represents a huge talent boost for New Jersey, but considering the goal is to make way for Lebron in 2010, this keeps them right on pace.