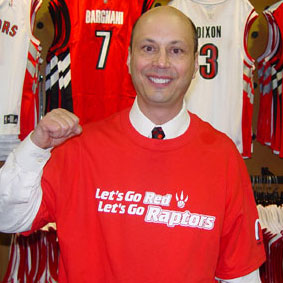 Chuck was certainly an MLSE man, but an important one in the community none-the-less...

I was actually in transit yesterday when I found out about Chuck Swirsky’s decision to return to Chicago.

There have been lots of articles penned about the Swirsk in the local media this morning and they all do him great justice as he did certainly become a cult figure here in Toronto and across Canada for that matter.

Was I a big Chuck fan? Well, not so much.

I found him better this past season, but the year before, everything that came out of his mouth seemed to be a "Chuckism" of some sort. "Salami and Cheese," "Oh my Bosh," "MP3 downloads," "Parkerville," "Boshpit," "Onions…" the whole thing was just getting a little out of control.

However while at times I had to turn the volume off when he and Leo were talking about libraries and Capitol One, I can’t deny the impact he had on Raptors’ fans and as an ambassador of the game here in this country.

And speaking solely from a broadcasting standpoint, he did have one of the league’s better voices for getting you pumped about a dunk or amazing play. We wish him all the best here at the HQ, and perhaps his path will cross with the Raptors organization again in the future, who knows.

So without Chuck, who takes over?

That’s a tough question as right now, even the Raptors’ broadcast schedule seems to be up in the air thanks to Sportsnet’s decision to drop basketball from the line-up next season.

Many people have asked for John Saunders as a replacement and while I agree, it sounds like they’ll go with someone a little more under the radar. (Read – cheaper.) Some aren’t a fan but I think Eric Smith would do a great job in this capacity.

I’m also going to throw a friend of mine’s name in the ring, The Score’s Arash Madani. Arash and I went to University together and did all of our college games via our local radio station. He did the live play-by-play while I did the in-studio side of things. He recently made the jump to The Score where he did play-by-play for college football and basketball, as well as on-the-scene reporting for the Ottawa Senators and Calgary Flames. He’s a huge basketball fan, albeit a Lakers booster, but would really do this position justice with his passion and insight.

I’m sure in the following weeks we’ll here some more names thrown around but please no Rod Blackesque names. It would be interesting to get a former player who maybe has moved on to work in this field. Maybe Zan Tabac has been honing his skills on the mic?

Otherwise maybe we find out what Norma Wick is doing…

Moving on, how about the news this morning that while Mike D’Antoni was given permission to talk to the Knicks and Bulls, he was denied access to the Toronto Raptors? This means that unless D’Antoni decides to completely jump ship without having a landing pad, Toronto won’t be able to make a play for him even if they are secretly interested.

I don’t even understand the NBA’s coaching revolutions. It’s like watching Days of Our Lives isn’t it? The same coaches just keep getting re-tread through the system, lasting three years here before going for another short stint somewhere else. With most soaps, you can miss a few months, then come back and find out that the plot is essentially the same. Maybe different characters are now parterned up with new mates, but it's the same people and the same story.

The NBA is the same. You could walk away from the NBA for a few season, then return and see the same coaches albeit with different teams.

And when they finish coaching, it’s off to the broadcast booth for a short stint before their names start popping up in rumour mills. Jeff Van Gundy, Mike Fratello and Doug Collins are all perfect examples.

That’s what makes a Jerry Sloan so captivating. Think about it for a second. The only other coaches with such permanent job security are Phil Jackson, Greg Popovich and Pat Riley (until he retired.) And they all have multiple championship rings unlike Sloan!

One coach that I think doesn’t get the respect he deserves his Cleveland’s Mike Brown. He’s the anti-Mitchell in many ways as he’s taken heat for not doing a good enough job relating to his team and focussing too much on defense. And as horrific to watch as last night’s Cavs-Celtics game was, Brown’s defensive schemes had James and the Lebrons within a missed finger-roll of taking Boston’s vaunted big three to overtime. I really didn’t think the Cavs would win a game in this series as besides James, they just don’t have the athletic types that give Boston problems (see Atlanta.) But Brown really gets his entire team to buy into the defense-first sets he puts in place and I don’t think I’ve ever seen as many charges and loose ball scrums forcing turnovers in a playoff game than I did last night.

Finally, getting back to the Raptors, an interesting blurb that a reader sent to me yesterday from Jose Calderon’s blog:

"As of today, the Raptors would like me to continue, however until the 1st of July we will not know anything about the possible renewal or other offers from teams interested in me for next season. What is clear is the fact that if I have to choose between a sports offer versus an economic offer, I will opt for the first. I want to be a starter and to be in a team that aspires for everything. Of course I will not be on a team in which I cannot be an important contributor nor if there is not a solid structure or if there are not options to be in the "Playoffs"."

While the paragraph on his site is via translation, it’s interesting that he expresses his desire to be a starter. This is the first time I’ve ever heard, or seen, Jose say anything like this. Perhaps one of our Spanish readers can make sure the translation is point on.

What makes this even more interesting is that RaptorsHQ’s insiders managed to get their hands on a draft version of a letter TJ Ford was going to send to Chris Paul after Paul lost the MVP award to Kobe Bryant. It’s an interesting read, and comes at a perfect time as yesterday was "Chris Paul Day" in the NBA Blogosphere, hosted by At The Hive.

Due to the formatting and style we couldn’t post it on this site so we posted it here, on Jamario-MoonHQ.com so it could be read in its intended format.

I don’t know TJ…you responsible for Delfino’s hair?? That seems like a bit of a stretch…