Wishful Thinking Episode 1 - Hey Phil, Now That You Have Pau...

Share All sharing options for: Wishful Thinking Episode 1 - Hey Phil, Now That You Have Pau...

"Are you kidding me? I need to defer to Kobe, Andrew and now Pau??"

All of a sudden with Miami in ruins, and the Lakers already playing some very cohesive ball, LA GM Mitch Kupchak jumped into the "GM of the year by way of highway robbery" contest with Danny Ainge.

Then things took another turn late last night when it was reported that Miami was going to trade Shaq to Phoenix for Shawn Marion and Marcus Banks. If you weren’t shaking your head in bewilderment at the Gasol trade, you were with this one.

Can Shaq even walk up and down the court anymore, let alone run it? And running it, and running it with Steve Nash and players like Barbosa are two entirely different things.

If this trade goes through I think it’s a slam dunk for Miami. They played rent-a-Shaq for a title, get rid of his contract while taking on a legit All-Star in Marion, can finish the season in disrepairs, and perhaps rebound next year with a top draft pick, a healthy Wade, and an angry Matrix. And even if the Heat don’t get Michael Beasley out of the draft…no big deal. Marion can play his natural spot at the 3 with Haslem manning the 4 and Wade can play the 1-2 so Miami could take someone like Derrick Rose or Roy Hibbert to address their other weak spots. And to top it off, Earl Barron, Ricky Davis, Luke Jackson, Alonzo Mourning, Smush Parker, Chris Quinn, Dorrel Wright and Jason Williams are all slated to come off the books this summer, giving the team some cap breathing space to rebuild with. If I’m a Miami fan, I’m ecstatic as you simply weren’t going to get anything else out of the Big Aristotle on the court.

But beyond Miami and Phoenix, let’s look at the losers in the two previous blockbuster deals. The sad fact is that in both of these situations, Memphis and Minnesota, teams facing bleak or mediocre futures decided to sell the farm and start over, a very common occurrence in the salary-cap dominated world of the NBA today.

And we as Toronto Raptors fans should know.

It was but a brief few years ago when the Raptors were in almost the exact same situation as Memphis however at an even bigger disadvantage as our star player, unlike Pau Gasol, was making his desire to be moved, quite public.

Well we’ve been over this a million times but Vince Carter was dealt for very little. In fact the VC deal mirrored that of the Pau Gasol exchange in that both Toronto and Memphis received salary cap fodder, a few probably inconsequential draft picks and some "potentially" useful veterans. 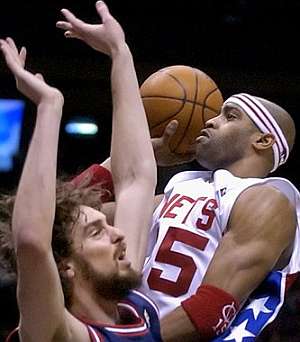 Gasol and Carter - a change of scenery for VC didn't do much in the long-run, will it for Pau?

In retrospect, Toronto definitely got the short-end of the stick off the bat as Carter looked rejuvenated in Jersey. However Raps fans knew that wouldn’t last and sure enough, it hasn’t. In addition, in the long-term the VC deal facilitated moving Jalen Rose’s immense contract, sped up Bosh’s rise to prominence and in the irony of all ironies, Vince now finds himself right back in a situation with New Jersey, that could be even worse than his previous one with Toronto. One hopes that Memphis, like Toronto eventually, can turn a similar frown, upside down.

Memphis traded Gasol apparently not to appease owner Michael Heisley in his constant bid for a Grizzlies buyer, but to start from scratch "ala Portland."

The Lakers on the other hand, made the trade to move in the exact opposite direction; to compete for a title. A starting line-up of Bryant, Odom, Gasol and a healthy Bynum on paper is perhaps the deadliest in the league from positions 2 through 5. And if the chemistry is there, could very well lead to a Lakers title.

There have been whispers that Odom may still be moved for someone like Jason Kidd.

There have been other whispers that Odom may not be happy playing third (or even fourth) banana.

And with Gasol being quite similar in style to Odom, perhaps Lamar would be more valuable in fetching another component to the Lakers’ triangle offence. Say a lights out shooter, a new generation Steve Kerr to Kobe Bryant’s MJ simulation.

A trade of Kapono, Rasho Nesterovic and Juan Dixon for Odom and Chris Mihm works perfectly under the salary cap. As an added enticement for LA, the teams could swap first round picks this year.

Kapono would be lights out in that Lakers triangle offence (not to mention he'd be fine with playing back on home turf considering his UCLA roots), and he wouldn’t necessarily have to start. Phil Jackson loved having Trevor Ariza play alongside Kobe Bryant and therefore Ariza and Kapono could take on the role of Kobe’s wing-man depending on match-ups.

How happy would Phil Jackson be if this was a Lakers jersey he was holding up?

And let’s look at the numbers involved.

By taking on Juan Dixon’s contract, LA saves about $2.5 million when it ends this summer, which is actually then a saving of about $5 million since Los Angeles is over the current luxury-tax set at $67.875 million. And both Odom and Rasho come off the books at the same time giving Colangelo and Kupchak lots of loot to re-sign their prized prospects, Bargnani and Bynum.

For the Raptors, Mihm wouldn't be chopped liver as a player either. Once healthy, he would probably be a very effective back-up at the 5 for Bargs, and like Dixon, his $2.5 million contract comes off the books this summer as well. He’s a solid rebounder, something the Raptors constantly need, and should be more effective playing in the East. Perhaps Toronto could even re-sign him at a reasonable salary in the off-season. The one stumbling block is that Mihm, as a "one year Bird player" in terms of his contract, would have to agree to the trade. However I don’t see this being a concern considering he’ll see little action in LA behind the likes of Gasol, Bynum and Turiaf.

The trade would also free up a roster spot for Toronto so they could take a flyer on a D Leaguer if they wanted to, much like last season with Luke Jackson. Or they could simply save the spot for their top draft pick next summer…or maybe Roko.

As for Odom on the Raptors, I don't think I need to explain how he'd help at the 3...especially in the rebounding department. Odom had his best season playing in the East while with Miami and could return to an All-Star level playing with Bosh, Bargnani, Ford and Calderon.

So is this a case of "wishful thinking" on my behalf?

But I think this is definitely a deal that both sides would ponder for a moment before discarding.

Furthermore, while it may not be realistic in the next three weeks as Los Angeles takes a look at what they have, if the Lakers underachieve and stumble in the playoffs, guess who will probably be tops on the chopping block this summer? You guessed it, Odom.

He’s been disappointing since being paired with Kobe and you have to wonder if with Gasol now on board, his time in LA may be coming to a close.

In the meantime, this is one Raptors fan who will be crossing his fingers hoping for an early play-off exit by the Lakeshow...

PS - Off the trade topic, RaptorsHQ is about to launch a new site - www.jamario-moonhq.com. It will be obviously a site centered around Moon to cheer him on in the upcoming All-Star weekend. Give us a shout here at the HQ and let us know what sort of features you'd like to see on the completed version!