These Wolves still have a lot of growing to do.

This game had all the makings of a trap game. As a result of the KG trade, Minnesota has essentially become an afterthought in the league. Although the team has a lot of young players, many with good, if not great, potential, they are currently one of the worst teams in the league with a record of 12-44.

That being said the Wolves have not been that bad as of late. Over the last sixteen games they are 7-9 and they have managed to beat some solid teams including, Utah, Phoenix and Golden State. Early on in the game it started to look like the Raps were not focused but in the end Toronto managed what on paper looked like a strong victory (107-85). This victory however, cannot be chalked up to the Raps simply outplaying the T-Wolves. Much of this victory was a result of the Wolves inexperience.

Two numbers really stood out on this evening. The first is the number is 19, representing the number of turnovers this young T-Wolves squad had. At the beginning of the game the Wolves were playing pretty good basketball and shooting a solid percentage. Then the team's inexperience started to shine through. Bad passes, unforced turnovers and a simple lack of execution ended up negating the advantage they had in starting hot from the field. The teams' point guards were making mistakes that are simply inexcusable at this level including leaving their feet with no-where to go with the ball.

The second number is 13, representing the number of offensive rebounds snagged by the Dinos. The Raps were simply awesome in grabbing offensive boards, in particular early on. Although Minnesota started hot they were unable to build a substantial lead due to Toronto’s propensity to manufacture second (and sometimes third) chance points.

The second quarter is where the wheels fell off for this Minnesota squad. The turnovers really did them in. This young squad simply doesn’t know how to win yet and much of this stems from the fact that there is virtually no veteran presence or leader. Minnesota now has a plethora of young guys but the next stage will be finding complementary veterans. Until that point it will be very difficult for this team to learn how to stem the tide in certain circumstances and keep an even keel. In the second quarter it was like they started feeling the pressure of having a lead and then literally threw it away. There are not many teams out there that can shoot 50% yet still lose by such a large margin.

Although the Raps didn’t play all that well in the first half, the T-Wolves essentially dug their own grave. The second half was a bit of a different story as the Raps were more willing to get to the hoop.

Luke Warm – Andrea Bargnani – Andrea’s play was somewhat surprising in this match-up. Il Mago was hit with two early fouls and it looked like it was going to be another poor performance by the big man. What was great to see was his effort after being put back onto the court. Bargs, despite the early foul trouble, played quite well driving to the hoop and being effective on both ends of the court. Rarely has Bargnani managed to contribute when hit with early fouls so this was nice to see.

Hot – Al Jefferson – You have to wonder what kind of player Big Al would be on a stronger team. Are his numbers inflated due to the youth and inexperience around him or is he really becoming a superstar? I have to go with the latter. He has strong moves on the block, is a solid rebounder, invites contact, and is a surprisingly strong passer out of the double team. If Jefferson develops a more consistent jump-shot from 10-15 feet out he could be absolutely deadly on the offensive end. Although his rebounding numbers left a little to be desired he was still very effective.

Cold – Corey Brewer – I have no idea why this guy is starting. Leo mentioned this in the broadcast and I have to agree (this might be a first) that it looks like he has lost a ton of weight since the beginning of the season. What I find odd is that Minnesota is starting him and yet only giving him nine minutes. Seems odd and clearly something is not working because he looks totally out of his element. I loved this guy in college and I find it hard to believe that he is struggling like he is. 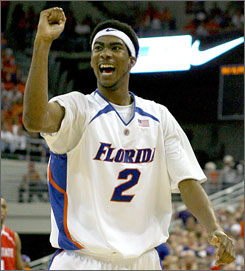 I don't think anyone in Minny has seen a smile this big on Brewer's face since his arrival...

Next-up is another match-up the Raps should win with the Pacers coming to town on Friday night. Provided the Raps can maintain their winning ways they should continue to garner praise from a number of analysts as evidenced by recent ESPN chats. The Pacers, despite their record are not however an easy victory.

As an aside how hyped is this Semi-Pro movie with Will Ferrell?! He is travelling and promoting this movie more than Hillary and Barack are promoting their candidacy for President of the US! I have some interest in seeing the movie but is it not impossible at the this point to be disappointed? With all of this hype, it better be close to the funniest movie I have ever seen. I love Will Ferrell and obviously love ball, but I can’t help but wonder if these things together don’t make for a less than stellar outcome.