3 In the Key – Toronto Raptors Game Day Preview vs. T-Wolves

Share All sharing options for: 3 In the Key – Toronto Raptors Game Day Preview vs. T-Wolves

Since we started this site almost three years ago Howland and I have had our share of complaints concerning the local media’s coverage of the Raps. If it wasn’t pure ignorance on their part about various issues (I personally love when some of these writers start throwing out draft pick ideas in May having watched nary a college game besides the NCAA tournament,) it was pure neglect as the Leafs and Jays were usually the talk of the town.

On top of this, the Toronto media for some reason has this unquenchable thirst for controversy in sports, be it Mats Sundin and his no-trade situation, or the Jays in the past and their inner-clubhouse turmoil. The media just can’t seem to let go of things and as fans, we get beat over the head with it time and time again.

The newest crack of choice is the Jose Calderon-TJ Ford starting situation for the Toronto Raptors. It’s not new in so much as since last season, writers have been speculating on who should be starting for the club, or trying to draw out angst between the two, but it is something that the local beat scoopers just can’t let go of.

So let me say this for the millionth time.

Provided both are playing to their potential and contributing to the team’s success, why does there have to be this incessant banter about who comes in as the first quarter QB? Isn’t "who ends the game" a more important topic to shine the spotlight on, or who should have gotten more playing time based on their performance last game? Both players have repeatedly said time and time again that they don’t care about starting, and frankly I’m surprised that neither has snapped at the media who continue to insist that there must be some sort of point guard controversy.

Just listening to yesterday’s media scrum post-practice made me wince as TJ Ford was subjected to the same questions about starting and did his best "grin and bear it" routine before thankfully instructing the media "not to start that" in relation to he and Jose.

Look, I’m sure that deep down, both Jose and TJ want to start. They’re both competitive athletes, not eight and playing on a rec. league squad. However there’s only one starting position on the team, and both players understand that Sam Mitchell will give whoever is starting, the quick hook if they aren’t playing up to par. When one is playing better than the other, both have been quick to acknowledge it.

So why try and create a controversy when there isn’t one there? I mean, TJ hasn’t even proven he’s back to full health yet and people are asking him about starting??? Give me a break!

Isn’t there anything else you can ask him? How about questions concerning his rehab process and how long Lucas will be with the team? How about the current success of his former college club, Texas, and his understudy who he worked with last summer, DJ Augustin? I don’t know, ask how he’s enjoying this tropical weather we’re having in Toronto?!

More importantly, how about some questions concerning playing against Foye and Telfair tonight? This is something I would have enquired about as point guard play should be key this evening against Minnesota as Toronto looks for its third straight win.

Maybe I’m in the minority however and attempts at sensationalist journalism alway win out. That’s why magazines like US Weekly and Ok! exist (and the Toronto Sun for that matter) and well…I guess that’s one of the main reasons we started this site in the first place.

On with the keys:

1. Point guard play – Minnesota is actually coming off a surprising win over Utah last night. Leading the charge was of course Al Jefferson however Randy Foye had his best game of the season with 20 points and Sebastian Telfair did a nice job of pressuring Utah and distributing the ball. The Jazz turned the ball over an embarrassing 24 times in the contest and the Wolves capitalized by getting out on the break and scoring in transition. Tonight, the Raptors need a good effort from Jose and TJ not just on the offensive end, but defensively as well to keep these two in check. Besides Rashad McCants, the Timberwolves just don’t have a lot of other options for perimeter scoring so locking the perimeter down and preventing forays into the paint is a must. 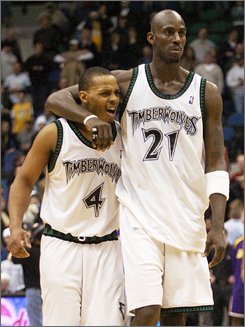 With no more KG, Foye needs to start taking over as this team's leader on the court...

2. Chris Bosh vs. Al Jefferson - Big Al is currently one of only a handful of players in the NBA to be averaging at least 20 points and 10 rebounds; not even Chris Bosh can say that. However CB4 has usually had the upper hand on Jefferson whenever they’ve played head-to-head and Bosh needs to continue that this evening. This doesn’t mean settling for jump shots but going to the rim early and often and looking for Andrea Bargnani in various mismatch situations down low. Considering the Wolves have been starting Jefferson at the 5 and Ryan Gomes at the 4, Toronto should have a distinct size advantage tonight and I expect Sam Mitchell to trot out Rasho, Humphries and maybe even Gangsta Beaker to take advantage. Bosh however is the one who needs to lead the charge and if he can help keep Jefferson in check, this should be an easy W for Toronto.

3. Home-court Advantage – Perhaps most importantly, the Raps need to get off to a better start than they did on Monday night. This means playing with intensity right from the jump ball and it shouldn’t be too tough considering: their competition, the fact that Toronto is playing at home, and the fact that Minny just played last night against a solid Utah club. The fact of the matter is that this should be win number 32 for Toronto and with the Cavs losing last night and facing the Celtics tonight, another good chance at pulling further ahead in the standings.