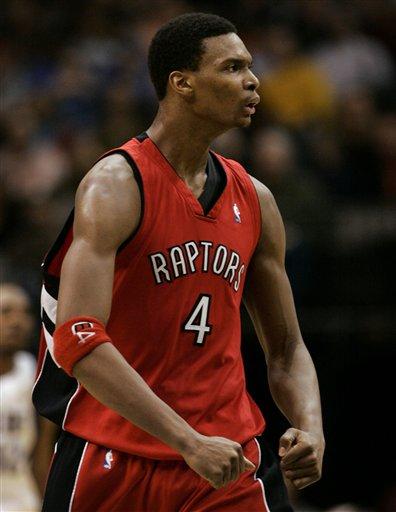 CB4 is ready to take on all comers.

It was just a little while back that I was discussing how the Jermaine O’Neal would help bring a new attitude to this year’s Toronto Raptors squad. It is now clear, even after just three games, just how extreme that change was been.

Whether it’s the body language on the court or the pre and post-game interviews it’s evident that this team is extremely confident right now and truly believes they can beat any opponent. It’s an attitude that hasn’t been evident in the ACC….well…possibly ever.

There is no denying that the addition of JO is one of the major contributing factors to this change in mentality. His toughness and defensive minded attitude are just what the doctor ordered and his willingness to put his body in harms way really sets the tone. He has thrown his body in warms way a number of times already by standing in to take the charge and I think I have seen more shot blocking and outstanding defensive plays around the hoop in just three games then I did all of last season. Right out of the gate he is backing up his pre-season words about trying to do whatever it takes to win.

Of course to suggest this change in mindset stems solely from JO would be a grave mistake.

Much of this new found intensity comes from the face of the franchise himself, CB4. CB4 has brought a new attitude to team as well following his successful summer with the gold medal winning US Olympic team. On the offensive end CB4 looks scary confident. Even though he can hit from the outside CB4 refuses to settle for the J. On each possession you can see him sizing up the situation and on almost every possession making the right play or move. Even with that silky smooth J he is not shying away from contact and he is using the extra space made available due to JO’s presence to exploit other team’s big men. His desire to get to the rim is helped by the fact that you are no longer seeing sloppy turn-overs or pour ball handling like in years past. You can tell that he believes he can score every possession.

It’s not however, the offensive part of CB4’s game that is having the greatest outcome on the teams early success. It’s his defense and his leadership.

I was lucky enough to sit courtside for the game against Golden State on Friday night and being so close allows you to get a real sense of how the players interact and appreciate the small intricacies of the game. Of all the things I noticed and observed the thing that stuck me the most is just how badly CB4 wants to see this team commit on the defensive end. On multiple occasions when running back on D, Bosh would yell at the other guys and get them pumped up to make a stop. He would consistently be talking to his teammates and sending the message that playing anything but hard nosed defense was not acceptable. He’s was vocal, passionate and most importantly the other guys listened and wanted to follow him. Hell his passion on the defensive end is so strong that I caught myself lacing up my shoes a little tighter just is case Sam called my name.

Right before our eyes we have seen Bosh develop into one of the best players in the NBA and with this sort of attitude and his commitment to winning at all costs we still have not seen his ceiling. Any questions about his leadership and ability to lead a team are now well behind him.

So what has the new attitude meant on the court?

Last season was one where we constantly watched the Raps give-up easy hoops and put on an exhibition on how NOT to play defense. Without any lock-down defenders and no true shot-blocking presence in the middle teams exploited the Raps time and time again and as they say the proof is in the pudding.

Last season the team’s primary defensive statistics looked like this:

Through three games this season the team’s primary defensive statistics look like this:

This is a startling difference and although some will discount the numbers due to the small sample size I counter that with the simple fact that this team is committed to defense which is something that couldn’t be said last year. I would not be surprised to see an even bigger difference as the season wears on. Just look at how guys like Anthony Parker and even Calderon are getting after it. The defensive mind set has started to sink in and the results will be promising.

This CB4 endured a lot of losing...aka character building.


Although he will never admit it one person that has to be smiling on the inside right now is Sam Mitchell. Through what I will call the "lean years" Mitchell forced Bosh to play through some tough situations where the game was out of reach. It was a character building exercise to help Bosh experience a losing situation in hopes that those experiences would make him work for more. Mitchell had helped groom KG into a force to be reckoned with and he has done the same with Bosh. CB4, Mitchell and the organisation as a whole are better off now that Bosh has fought through the tough times.

It’s having experienced losing which gives Bosh his swagger. He’s been and fought through the valley and is now ready to reach the summit. He’s earned the right to be vocal and earned the respect of his teammates. You’d be worried if Bosh didn’t have a little swagger right now and with JO at his side they have the substance to back it up.

While on the topic of CB4 there is an interesting interview with him here.