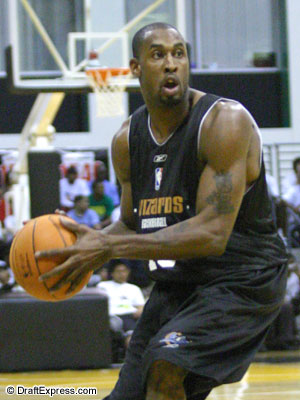 Solomon - A great change of pace from Jose, or a bit too much Mike James??

There it was folks, real, live Raptors Basketball. Leaving work I couldn’t get in front of a TV fast enough.

In terms of O’Neal, I can’t say I have ever been this excited about a new player coming to Toronto.

In some ways I can’t believe this guy is rocking a Raps jersey now. He is a presence on the floor. Sure his numbers didn’t jump off the page tonight but it was exhilarating just to see the team run plays for this guy and feel confident that good things were going to come. Even when he was given a major facial by Wilson Chandler when going up for a block, the simple attempt made a statement to the rest of the team that he was willing to put himself in harms way to make a play on the defensive end. It’s only one game, and I am probably over excited about seeing Bosh and O’Neal on the court together, but I truly believe the sky is the limit.

The other two new kids on the block were equally as impressive on this evening. Will Solomon, outside the questionable shot selection at times, looked solid. There’s no doubt that he is a hybrid between a PG and SG and that may not be such a bad thing. Given the shortage of depth in the backcourt, his ability to shoot the rock and play off the ball can only be an asset. In many ways he reminds us of Mike James in that respect…if James was playing under control for a playoff-pound team. Even though Solomon had a solid night shooting, he also managed to dish out five assists. I can see Sam Mitchell falling in love with this guy already.

The other new face in the backcourt was equally as impressive in some ways and I for one was pleasantly surprised by Roko’s play on this evening. For one he didn’t look out of place on the court and seemed quite poised. His play demonstrated a high basketball IQ. He created shots for his teammates with the drive and kick, and for the most part didn’t force the action. There will undoubtedly be times when the young guy struggles this season, and he will likely wear down some as the 82 game schedule catches up with him, but it’s clear he has some skill. Unless at some point during the upcoming season Colangelo decides that this team has a legitimate chance to do something special and feels like a veteran PG is the missing piece, expect Sam to let Roko play through the ups and downs and develop as a player.

The other "new guy" tonight was Matt Devlin. Ladies and gentlemen your new voice of the Toronto Raptors. I will be the first one to admit that it was different to hear someone other than Chuck Swirsky call a game but right out of the gate I’m a fan. Devlin is more calm and collected and simply "calls" a good game. There’s less antics and more substance and how can you argue with substance. I for one am really looking forward to hearing him broadcast games with Jack.

I don’t really have much to add here except that I love this Knicks team.

That’s right, your team’s power forward is out there firing them up, including two straight at one point and his only make, one at the buzzer, that gave us the game’s final score.

Between him and Nate Robinson it looked like "who got next" down at the local YMCA.

However it’s not all bad for New York. If this team can ever play with consistent intensity and some modicum of control, it’s got the talent to surprise clubs. David Lee of course is a player, (he finished with a game-high 22 points and also chipped in nine rebounds) and Wilson Chandler looks like another Isiah draft sleeper.

In fact, why didn’t New York keep Megatron around just for the draft?

Looking at his past six or so drafts, Isiah’s done remarkably well no matter where he chose from. Chandler can handle the ball, power through the lane, and looks to be able to finish strong as per his dunk on JO. Lee could be a fantasy basketball force if he’s left in the starting line-up, and even though Nate is about as disciplined as a wino in an LCBO, he is a great energy player who can provide a nice spark off the bench.

The problem though is going to be when D’Antoni has to get other players involved.

See, if this team could ONLY play the guys they did tonight, and maybe substitute Marbury for Jared Jeffries when healthy, then it has a chance to be decent, chemistry issues aside.

However how poor D’Antoni is going to integrate Eddy Curry, Jerome James, and a healthy Jeffries back into the mix is beyond me. And that’s not even getting into the Gallinari or Allan Houston situations! 10 guys played tonight and if you add Curry, James, Jeffries, Gallinari and Houston that’s 15, all of whom besides maybe Houston, will feel they deserve major minutes. 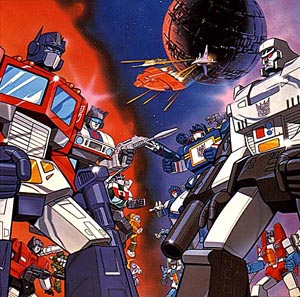 It was a win for the Autobots last night and it could be a lonnnng season for the Decepticons...

But enough Knicks talk, let’s get back to the Raptors where two players really stood out for me tonight above everyone else; yep, I’m talking about Bargs and the Hump.

Andrea may have hit six fouls, but he almost hit the average of what I expect from him this season (15 and 6 with a block), missing it by a single rebound. He didn’t quite shoot as well as against the Cavs, but he just seems like a different player through two games. He seems more mature and at ease on the court, and I was overjoyed to see him mix up his moves; at times fading away on jumpers, at times driving to the hoop, and at others spotting up.

Hump on the other hand was all power. Oh he knocked down a few J’s, but his 13 points and six rebounds were the result of constant hustle and energy, something the Raptors sorely lacked after once again getting down early on the scoreboard. Kris may be taking some heat for his new hairstyle but of all the Raptors, he looks to be the most game-ready in my eyes.

Of course it is two games into the season, but forgive me for being a little excited about the possibilities these two represent. If he and Bargs can keep this up, it adds a completely new element to the team. All of a sudden teams are getting beaten up all night from inside and out from the 4-5 spots. Bosh and Andrea can both take their men off the dribble, can draw the defence out with their long range shooting, and can do some damage on the inside as well. Meanwhile, O’Neal and Humphries are banging guys around down low and getting their hands on put-backs.

The other thing that was going through my head is that if our wing spots look particularly weak, perhaps there are now legit trade options here. If Hump can parlay his early success into a regular role as a contributor off the bench, perhaps by the trade deadline another team with wings to spare will look to make a swap.