3 In the Key: Toronto Raptors Game Day Preview vs. Nuggets

Share All sharing options for: 3 In the Key: Toronto Raptors Game Day Preview vs. Nuggets

This guy reminds me of last years squad.

When you look back at last season for the Raptors what’s the first thing that comes to mind? For some it will be the Jose vs. TJ debate while for others it might be the regression of Andrea Bargnani.

For me it was the lack of toughness, attitude and certain type of fortitude. In short, last years team was soft. Like Pillsbury Doughboy or Stay Puft Marshmallow Man soft.

It’s not that there is something wrong with having a team of Mr. Nice Guys but there’s a time and a place to show that you won’t back down when pushed to the brink. I can think of a handful of times last season when I was left wondering why someone on the Raps roster didn’t make their presence known and in some cases stand-up for a teammate. The TJ Ford/Al Horford event was definitely one of those times but there were many others.

One team that definitely doesn’t have an attitude issue is the Raptors opponent in Edmonton. The Denver Nuggets have attitude and then some. If you search "toughness" on Wikipedia there should be a picture of Allen Iverson. When it comes to getting in peoples face and playing the role of tough guy Kenyon Martin fits the bill (at least he is getting paid for something!). On a whole it’s a team with a thug-like mentality, perhaps even to a fault. Teams know when they face the Nuggets that (a) they are likely to score at will, in particular with Camby now in La La Land, and (b) despite the porous defense the Nuggs won’t back down from any opponent.

As much as the conversation surrounding the Jermaine O’Neal acquisition has focused on how his presence will make things easier for Bosh and for the team’s shooters perhaps the biggest thing that JO brings with him is attitude.

Although some fans in Indiana will question JO’s toughness despite the malice at the Palace, for the Toronto Raptors he undoubtedly brings an attitude and a swagger that this team has been desperately missing since Charles Oakley was running around the ACC spouting off at every opportunity.

If you saw the Lakers game you know exactly what I am talking about. Jermaine O’Neal is not scared to put opposing players on their backs. Even if JO struggles to find his All-Star form, or even something close to it, having someone anchor the Raps D who will actually make opposing wing players and point guards question whether to drive is a huge asset. Do you actually think JO would have let Kobe go off for 81 points without at least forcing him to think twice about going to the hole time and time again? If you add Joey Graham into the mix you have a couple of guys that really know what a hard foul is (even if it’s offensive in Graham’s case).

Cap issues aside, it’s the attitude that JO brings that to me made the swap of TJ Ford and parts a worth while transaction. Adding O’neal hasn’t suddenly turned the Raps into the toughest team in the NBA but I take comfort in knowing that this team now has more of a physical presence.

That takes us to tonight’s three keys:

1. The Big Men – This is another interesting test for the Raps Twin Towers. Mr. Martin looks to be as healthy as he has been in years and the center position now belongs to Nene. There is some athleticism on this line as well as some bulk. Look for Bosh and JO to continue to build on their budding chemistry.

2. Testing the Joey Graham Experiment – Graham has been better than expected this pre-season and has made a few spectacular plays but still has not been the poster boy for consistency. Tonight will be a solid test for #14 as he goes up against Carmelo who has been doing it all this pre-season in an attempt to expand his game. If Graham manages a solid performance I think it is safe to pencil him into the starting line-up for the opener. If not Mitchell will have another dilemma outside of the back-up PG issue. For those of you who think starting Bargs at the three would be a good idea it’s this sort of match-up that should make you think twice. 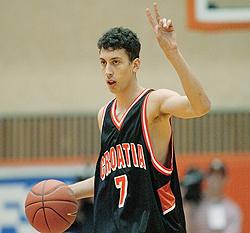 Yes Roko you are fighting for the number 2 PG spot....

3. PGs, PGs and more PGs – Franchise did a solid job discussing the PG situation yesterday and I won’t beat a dead horse other than to say that this is another opportunity for one of Solomon and/or Ukic to shine. This may in fact be the best opportunity given their match-ups. Any team rumoured to be considering Jamal Tinsley must be desperate for PG help and Denver is that team. It’s also noteworthy that the PG situation in the Eastern Conference was discussed in the chat with John Hollinger at ESPN.com. Here’s the outtake:

Tab, Toronto: Hi John, Who do you like out the three to make the all star game, Calderon, TJ Ford or Devon Harris?

SportsNation John Hollinger: I'll go with Ford. I think Indy will surprise a lot of people this year, and anytime that happens the new guy gets a disproportionate amount of credit.

Now wouldn’t that get the haters out…..

As an aside we have been nominated for best Raptors blog out there. Feel free to vote for the HQ but don't feel obliged. We don't do this for awards but we thought we'd give you, the readers, a heads up.

Chicago:
Give me the Rock
Blog a Bull

Cleveland:
Waiting For Next Year
Fear the Sword
20 Second Time Out