Yesterday was a day Franchise myself and a few of the "boys" were looking forward to.

The 76ers-Raps game you ask?

It being arguably the best time of year for sports (NFL, NBA, NCAA, and yes I supposed the NHL) we decided to use this Saturday to have a Ball-a-Thon. That’s right. Basketball, all day. The highlighted match-ups included:

All of these match-ups were highly entertaining, energy filled, and by the time they had wound up we still had a full slate of NBA ball to complete the day/evening. Toss in a continuous stream of adult beverages and Franchise cooking up some savage spaghetti it was becoming the perfect storm for watching the Raps match-up.

We were sure that the Raps would take this one and sweep the 76ers on the season. Bosh, white hot as of late, would "dominate" we all thought. There was "no reason for them to lose", was the consensus in the room.

We were pumped to watch. Unfortunately, the Raps were not pumped to play.

Those are the only numbers you need to know, and they reflect the scoring in the third quarter of last nights game. Sam, rightfully rested his starters more than usual in the first half of last night’s game. They had played heavy minutes the past little while and the rationale for lightening the load early made sense. The problem was, the starters didn’t reward Sam for giving them rest early as they came out in the third sluggish and lacking energy. In fact, the exact reverse of what should have occurred is what went down. The 76ers took it to the Raps in the third and despite a feverous comeback attempt the Raps had simply dug themselves too big a hole. 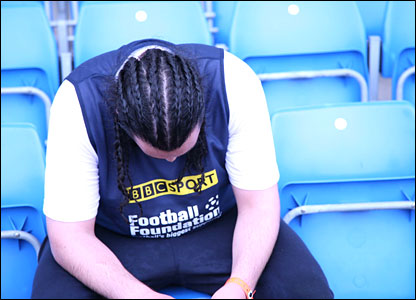 We were expecting Franchise to fall asleep....not the Raps....

On top of the third quarter performance there was a string of late game plays where the Raps were given every opportunity to snatch the win, but they couldn’t take advantage. The missed three by Anthony Parker was the final straw. Unlike last year the Raps have done a much better job avoiding the deep holes and then having to mount serious comebacks but last nights game couldn’t help but remind you of last season. This time around though they just couldn’t close the deal.

Hot - The 76ers Starters: A really solid performance by the starting 5 for the 76ers, with four of them in double figures scoring wise. Mo Cheek’s players were filling it up, in particular Willie Green who was on fire at certain points. Iggy continued to do everything for this team and Dalembert was a force on the glass. It was the starter’s energy and high level of play that kept the Raps down.

Luke Warm - Joey Graham: Can you say showcase? Joey has started to see more minutes as of late and last night was a perfect example of that. Graham came in and played the PF spot and performed admirably. Not only was he 3-4 from the floor but he also went to the line 8 times making 7 of them. 13 points in 15 minutes is a nice evening. I have been saying all along to play this guy where he is comfortable (on the blocks) and the results of that are nice to see.

Ice Cold - Jason Kapono. It’s not really Kap-One’s fault that he has been ice-cold as of late as he is getting very limited minutes and still no plays are being run for this gunner. One of two things has to happen here. They either need to find a way to take advantage of his shooting or trade him. Right now the situation is totally fruitless.

Deep Freeeze - Andrea Bargnani. I’ve got nothing at this point.

The Raps after a busy schedule the past little while will have a chance to re-charge the batteries over the next couple of days before facing the powerhouse that is the Boston Celtics. The Celts have had the Raps number this year and there is pressure on the Dino’s to pull off a similar upset as the one they experienced last night.

Interesting enough there is talk in Memphis that Damon Stoudemire is currently being bought out and both Toronto and Boston have shown interest in bringing Mighty Mouse into the fold. Considering how quickly things can happen in the NBA might a Damon Stoudamire sighting be possible by Wednesday, even if it is just in civvies? Anything is possible at this point.