Let’s keep this short and sweet – this was a big win.

This isn’t the Atlanta Hawks of years past. And no, it’s not the Phoenix Suns either, but in a game that featured some more rough stuff, we saw a Toronto Raptors team that showed their mental toughness, especially down the stretch. This looked like the Raptors of last season, a team that could take an opposing team’s best shot and bounce right back.

It's not something we've seen a lot of this season but hopefully a sign of things to come.

And the rough stuff…well, let’s just say it’s looking like Atlanta wants the Hawks-Raptors’ games to be the new Pistons-Bulls of the early 90’s.

For those who didn’t get to see it, Anthony Johnson elbowed Jose Calderon in the head and was given a flagrant two foul and henceforth ejected. He’ll probably face suspension of at least a game by the league as make no mistake, this was no Al Horford rookie-mistake. It’s hard to get a good replay of the foul but essentially Calderon was coming through the lane and was given a nice little shot to the back of the dome. Kudos to the referees who immediately caught the errant limb and gave Johnson the old-heave-hoe.

The interesting thing is that it was Al Horford who was supposed to play the role of Megatron tonight. Yes, Horford got the boo treatment from the sold-out Air Canada faithful, but that dissipated as the game went on. Johnson on the other hand will probably join the boo club that many of our readers were discussing on the site yesterday.

It’s just too bad the next time these teams play isn’t until April 2nd…in Atlanta.

If Anthony Johnson is Megatron, does that make Tyronn Lue Starscream??

This would be the number of free throws the Raptors attempted last night. Besides holding the Hawks to 41 per cent shooting from the field, this was the other key in getting the win. When Toronto’s jump-shots weren’t falling (they didn’t make a 3-point shot until the second half of the game) the Raptors made a concerted effort to drive to the basket, especially Chris Bosh who had 14 free throw attempts himself.

We had mentioned in our game-day keys how important it was for the Raptors to guard the perimeter and besides Josh Smith in the first half, they did a reasonably good job. The team forced the Atliens into jump-shots as we had hoped, and kept the Josh Smith highlight reel to only a few new entries.

I’m going to identify one point which I thought made the difference in this game. It wasn’t so much the turning point, as the Raptors were already in the lead, but it really pushed the team over the top and you just got the feeling after the play that the game was Toronto’s for the taking.

The play in question? It was a classic offense-defence combo starting with a tremendous block from Jamario Moon and finishing with Anthony Parker knocking down an open 3 at the other end. The play brought the crowd and the team’s energy level to another height and that spurred the Dinos on until the final seconds ticked away. The result – Toronto’s fourth straight home win.

Is there anyone in the league playing better than this guy right now? CB4 is carrying this team at the moment and while he’s getting some help, it’s his leadership that has impressed me the most. Yes his scoring average has been Kobe-esque and he’s grabbing boards left and right, but what’s impressed me the most in this recent stretch is how he’s taken over games. Sometimes this means blocking shots and rebounding, sometimes this means being more aggressive and getting to the free throw line. Indeed, he is playing like the franchise player.

We’ve been seeing this line-up a lot lately and I expect we’ll be seeing a lot more until Andrea shakes off his doldrums and TJ returns. You can’t say enough about CB4’s supporting cast on the night whether it was Parker’s timely 3’s, Jamario Moon’s defence and shot-blocking, Jose Calderon’s grit and all-around play leading the club or even someone like Joey Graham who came in and gave the team some solid minutes. It’s so great to see the main components on this club clicking at the right time and I’ll be looking for this to continue tonight against Philly.

If we had done this recap at half-time, Smith would have been in the "white hot" category. The kid was KILLING Toronto in every which-way and was showing no signs of slowing down…that was until Atlanta stopped going to him as the number one option for some reason. I couldn’t understand this as the Raptors have no-one who can match up with the high-flyer. Jamario Moon played an excellent game and locked-in on Smith in the second-half, but it just felt like Atlanta settled for far too many long-range shots. Considering over half the team’s scoring came from two players (Smith and Joe Johnson) I was left scratching my head as to why they weren’t used more often. But hey, I have no problem with Tyronn Lue firing away! (That WAS Lue wasn’t it…I couldn’t see the usual rat-ness without his former hair-cut.) 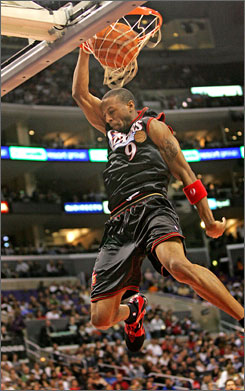 Nothing like going from Josh Smith one night to Andre Iguodala the next...

No rest for the weary as the Raptors immediately head to Philly to take on the 76ers. This will be a match of two teams headed in different directions with the suddenly red-hot Raptors, winners of five of their last six against the 76ers who have lost eight of their last nine. Here are three things we’ll be looking at tonight:

1) Fatigue. The Raptors showed toughness in a game that had a playoff type atmosphere. The question then is, how will the team do tonight after such a hard-fought win? The 76ers have been struggling lately and will be hungry for a W. It’s going to take maximum effort from Toronto and they may have to gut this one out. The Raps only play two games next week so they’ll have lots of time to recoup…but tonight they need to get out early and jump on Philly to get this win.

2) Get production from the bench. Broken record time. Philly’s bench has been improved of late thanks to players like Louis Williams and Thaddeus Young. Toronto has been relying on its starters (each averaging approximately 40 minutes a game in the past few contests.) These two points aren’t exactly conducive to a Raptors’ win unless Toronto gets a boost from the bench. After some great help against Sacramento, the Dinos’ subs scored only 12 points on five of 17 shooting and in particular, Wednesday night’s star Carlos Delfino went 0 for seven. It would be great to get Bosh and co. some rest which means either Andrea Bargnani takes over (and this could be a good game for him in that respect) or the bench steps it up. I’m going to go with the latter in terms of probability right now.

3) Rebound, rebound, rebound. Andre Bargnani had a tough time trying to deal with Reggie Evans last time these teams met. He’ll get another crack at the big lug tonight and needs to box out to help CB4. Bosh will have his hands full with Samuel Dalembert (or Reggie Evans depending on match-ups) and therefore the rest of the Raptors need to ensure that they get on the glass to prevent easy buckets for the 76ers. The Sixers are one of the worst offensive teams in the league so easy baskets in the paint aren’t going to do Toronto any favours.

I think the Raptors take this one, but I think it’s going to come down to a grind-it-out affair where Toronto pulls ahead for good late in the fourth.