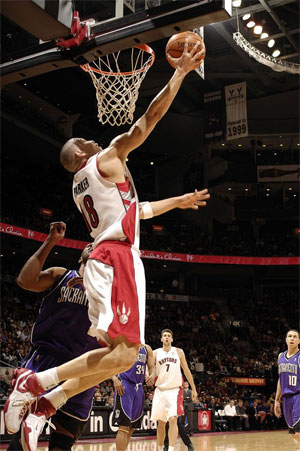 Bring on the Knicks!

The Toronto Raptors finally got some juice from their bench and solid games once again from most of their starters in last night's 109 to 96 win over the Philadelphia 76ers.

On top of this, the rollercoaster ride known as the Raptors' offence was once again on a high shooting 55 per cent from the field and nearly 43 per cent from beyond the arc.

It wasn't all fun and games though for viewers. Once more Toronto had rebounding issues and allowed their opponent to creep back into the game before finally putting it away.

And the 76ers aren't as bad as many predicted with some nice looking youth. In particular, Taddeus Young has officially joined Danny Granger on my "players I wish we could have drafted" list. Kid looks like he's going to be a player.

Franchise wishes Young was holding up a slightly more purple jersey instead...

Well, a number of things actually so let's run down the HQ post-game checklist:

1) Rasho needs significant minutes. I've been saying it all season and one of our readers put it quite nicely post game, if the team wants to develop talent, play Andrea. If they want to win, they need to play Rasho. And the combination of both in order to grab a W without setting Bargnani's development back usually results in Kris Humphries lack of playing time. There's no real way to change this either until Andrea learns to rebound the basketball. He simply isn't strong or aggressive enough inside at this point and we saw that once again last night. In fact, at times he just sort of looks like he's playing volleyball, tipping the ball to no one in particular unable to grab the rock and it's almost comical to see him randomly jumping around in the paint. I think he'll improve in this area, much like Chris Bosh has done since he was drafted, but right now, Rasho is still the best choice at the 5. He's not a liability on either end of the court and while not someone you run plays for, he can get the job done consistently. So for the rest of the season I expect Bargs to start, but Mitchell to pick and choose his spots in terms of how long he plays. It's just too bad though in my opinion. Starting the game with Rasho sets a much better defensive and rebounding tone than with Andrea. The Cavs game was a perfect example of this. Sure Il Mago was on fire offensively but games are won at the defensive end and thanks in part to Bargnani's poor rebounding, the Cavs were able to hang around till number 23 took over.

2) Anthony Parker and Jamario Moon are critical to this club. In what would have been our usual "temperature check" section of this recap, I would have given Sam Mitchell the nod. After the stagnant scoring to end their West Coast trip, Sam Mitchell and co. decided to tweak their offense to get AP more involved. It's paid dividends as Parker has looked much more aggressive of late and lead Toronto with 22 last night. Jamario Moon has played well too and his all-around game is a nice complement to AP's smooth scoring. I'd still like to see Jamario slash to the rim more but he's been more aggressive too in the past few games so hopefully that will come. I'm really looking forward to watching this kid's development as time goes on as there's no reason why he couldn't become a Gerald Wallace type-player. Moon however needs to hit the weight room this off-season as he often gets pushed too far under the rim to be a shot-blocking factor. Once he adds some more strength though and consistently looks to get to the rim, he could prove to be a very valuable commodity. The bottom line is that Chris Bosh can't do it all on offense and when these two get going scoring-wise, it adds another level to the Raptors.

3) Carlos Delfino needs freedom while Jason Kapono needs structure. Like AP and Moon, Delfino and Kapono are two other players who I feel have complimentary styles. The problem lately has been taking advantage of either. Last night both were quite efficient scoring 20 off the bench and chipping in six rebounds, six assists and a couple of steals. Last night's game though reinforced just how important it is to let each play to their strengths. When Delfino has the ball in his hands and is allowed to create off the dribble and play one-on-one, he is much more effective and in fact the entire second unit benefits. In previous games the ball spent too much time in Juan Dixon's hands and Delfino was receiving it off of curls etc. Last night he initiated the offense at times and would mix up his attack plan depending on his defender. We saw him spot up for 3's, post-up smaller defenders to get to the line, and get into the paint to find open team-mates.

Kapono on the other hand needs to be a cog IN the offense instead of the one trying to make it go. His eight points last night came off of little curls and open looks when he didn't have to try and create his own shot.

Perhaps pointing these things out seems a bit obvious but I really feel for the Raptors to continue to have success, the coaching staff needs to keep looking to make the best use of their players' skill sets.

4) The team can't expect to keep winning games without rebounding better. Post-game the folks on NBA TV were giving the gears to Chris Bosh for having one measly rebound last night and rightfully so. The 76ers are a solid rebounding club and CB4 needs help, but it's inexcusable for someone of his size and ability to only grab that few. In fact in our usual post-game format, the "numbers game" section would have highlighted the numbers 17 to 6, as in the discrepancy in offensive rebounding. For the second game in a row the Raps were owned in this area and had it been a less offensively inept club they were playing, this might not have been a win. It's never too early to talk draft and perhaps the Raptors should start looking at footage of Kenny George...just not this clip.

While not as ugly as last night's Russian Super League fight, the Boston Celtics apparently did a bit too much trash-talking in their first meeting with the Charlotte Bobcats and paid the price last night as a result.

This is yet another example of something we've been discussing recently, that being any team in the NBA can beat any other team provided the motivation and effort is there.

Bring on the buffet, the Knicks are up next!