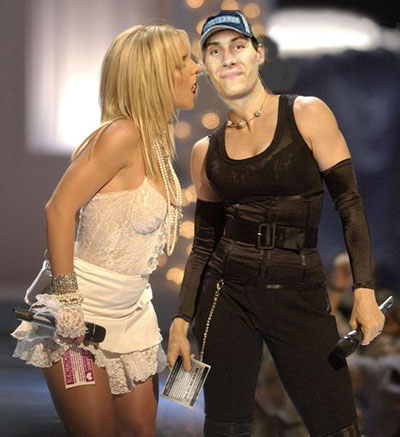 Sergio Rodriguez didn’t even get into the game.

Yes, that’s how deep Spain is.

As our master overseas updater Sergi P has told us many a time, yes, this team is good.

It’s tough to even break things down when as Sergi mentioned, Spain took it to a Russian team that was starting to look like one of Spain’s main competition in this tourney.

I mean, Rudy Fernandez took only two shots all game!

This Spanish team is for real and it’s a shame that instead of seeing highlights of Calderon slashing to the rim, I was instead last night subjected to Britney Spears and her MTV awards comeback. If Calderon to the hoop for the basket and one is a thing of beauty, Spears’ physique, lip-synching and half-hearted attempts at dance choreography are surely the antithesis.

In fact, to dwell on this topic for another minute, was anyone else repulsed by this spectacle? Every one of Britney's dancers was in much better shape than her and each looked like they were at least putting their all into the dance moves.

Well, let's just say you might as well have had Pavel Podkolzine in her place.

But I digress. Let's get back to the topic at hand.

The more I read about this tournament and the more the days drag on before the start of the NBA season, the more I fail to understand why RaptorsTV isn’t covering any of these games? I mean, half the cot-damn team is playing in the tournament!

Maybe we’re just due for a RaptorsTV bashing session...it seems like we haven’t had one in a while. But in all seriousness, I’d think that Raptors fans, especially at this point in the arid terrain that is late August-September of the NBA off-season, would be clamoring to see Garbajosa, Rasho, Il Mago, Calderon, Ukic and even Slokar in action!

So why not give it to them??

Obviously some of this comes down to cost, and the business of broadcasting much further away than Las Vegas. In addition, the sad reality is that if Team USA was playing in Spain right now, NBA TV, and therefore RaptorsTV would be there as well.

Yes, this tournament is really making me come to the grim conclusion that my love-affair with Team Canada probably wouldn’t have been as strong as it was had the US not been featured in the same tournament as them. Point being, RaptorsTV just wouldn’t have shown their games and who knows if The Score would still have kept up their coverage.

In any event, it’s been great the past week to follow some of next year’s crop of Raptors participating in meaningful competition and unlike Samuel Dalembert, let’s hope they all report to camp this fall injury-free. (And on the topic of Sammy D, how big of an impact does this injury have on the 76ers willingness to let him play again with Canada next summer?)

And yes, we’re still about a month away from the NBA season getting started so until then Sergi, on with the updates!