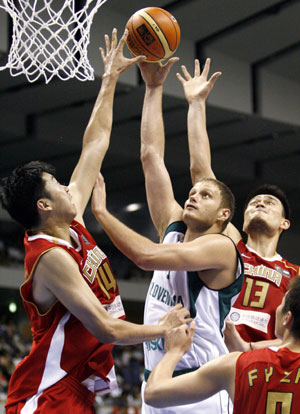 I’m presently writing this update from the airport in Thunder Bay as I’ve been traveling to some of Canada’s more remote areas the past few days.

However thanks to technology, I’m able to keep a finger on the basketball pulse so let’s get down to business.
?For the past four days, the 2007 Eurobasket tournament has been in full effect and while I was impressed with some of the games in the Tournament of the Americas, Eurobasket obviously is on another level. As one of our readers put it best, after looking at some of these clubs, it’s going to be very tough for Team Canada to get one of the remaining spots for next year’s Olympics without some more talent, and a bit of luck.

So far Eurobasket has already completed their first round of action and are into the next. (A big shout to Sergi P who has been doing double duty as reader and foreign correspondent as since we can’t see the games for the most part here, it’s great to get live updates and news.) So far the top teams through one and half rounds are Russia (who has yet to lose through five games and which boasts Andrei Kirilenko and Sergei Monya among other NBAers), Croatia, Spain, Greece, Turkey, Slovenia, Lithuania, France and of course Spain. All of these clubs would likely make short work of the present incarnation of Team Canada and even Israel, Portugal, Germany (with Dirk Nowitzki in tow) and Italy would be tough outs for team Canada.

Speaking of Dirk Diggler, Nowitzki is the tournament’s top scorer at about 29 points a game and is one of a number of NBA players standing out for their respective clubs.

This tournament of course has a number of Raptors past and present participating as current Toronto players Andrea Bargnani, Jose Calderon, and Jorge Garbajosa are all involved as well as former prospects Uros Slokar and Roko Leni Ukic. So let’s take a look at how each is doing:

Roko Leni Ukic - Playing for the Croatian squad, Ukic has had an up and down tourney so far. He’s averaging eight points, and 1.7 assists and rebounds. No, not exactly stellar numbers. For a point guard, the assist numbers are especially discouraging, and made my worse by the fact that he’s averaging more turnovers (two a game!)

On the flip side, his team has been a powerhouse so far and due to its depth, Ukic has only been averaging only 18 minutes a game. As well, when he has gotten chances, he’s made the most of them shooting almost 60 per cent from the field and 50 per cent from beyond the arc. For Raptor fans, it’s these numbers that are most encouraging as when Roko was drafted, the biggest knock on him was his ability to shoot the ball.

Jose Calderon - Calderon’s play so far has been decent, but as our readers have been discussing, he’s just not having to do a lot yet in this tournament. He’s only averaging about 23 minutes a game in playing time and 8.3 points, three assists and three rebounds puts him in a similar statistical category as Roko above.

However Calderon should get more time as the game’s become more important starting with tonight’s tough match against Greece. From a Raptors’ perspective, his shooting percentages look good so we’ll see how he does as the tournament’s intensity heats up.

Jorge Garbajosa - Calderon’s team-mate has also played limited minutes but this is good news for us Raptors fans. In fact, as one of our readers mentioned, Garbs going through this tournament injury-free while playing limited minutes would be the best-case scenario for Toronto. It would help ease him back into competition and aid his confidence for training camp all the while allowing him to represent his country.
For the tournament Jorge is averaging eight points and about two rebounds a game playing about 18 minutes per. His three-point shooting has been scintillating however I’d rather see him do some more damage from the inside as Toronto should have lots of external firepower next year.

Andrea Bargnani - Il Mago has not exactly been his magician self so far in this tourney. His Italian squad has disappointed and barely squeaked into this next round of play. He’s averaging 13 points and 3.7 rebounds a game but he has yet to block a shot and I’m hoping to see his defensive numbers start to pick up.

It’s this area of his game that Toronto really needs help with and since he’s rumoured to have bulked up over the summer, let’s hope we see him put it to good use throughout the rest of the tourney.

On the positive side, after a tough first game in which he scored only four points, he’s been much better at shooting the ball in his subsequent games and hopefully Bargnani reclaims some of his Il Mago magic in Italy’s future games.

Rasho Nesterovic - Yep, same old same old for Rasho. A bit less than 10 points and about seven rebounds and a block a game tells you just about everything you need to know as a Raptors’ fan. Nesterovic has been anchoring the middle for Slovenia and his squad looks deep once again. His percentages from the field have been good and I’m expecting Rasho to be solid for the Raptors once again this season. He’s only got to the line once so far in the tournament so I’d like to see him improve on that but otherwise, Rasho has been Mr. Steady.

Uros Slokar - Slokar is no longer a Raptor but I felt we should include him in this break-down as well to see how his development is progressing.

Unfortunately, he’s only played on average 11 minutes a game so his five points a game and 2.3 rebounds don’t tell the average fan that much. Until some of Slovenia’s more senior players move on, it looks like Slokar just isn’t going to get that much burn.

It’s disappointing that these games aren’t being carried here in Canada but perhaps some of the later rounds will be picked up. Raptors’ insight aside, this tournament is packed with talent and teams like Spain are simply a joy to watch when in full flight.

Speaking of Spain, Carlos Navarro is back in tow with the club making the Eurobasket favourites seem even more dangerous. It will be interesting to see what effect his return has on the play of both Calderon and Garbajosa and we’ll keep our eyes peeled here at the HQ for some breakout games by either player.
And by break-out, we’re still crossing our fingers that that doesn’t mean either being helped off the court by team-mates or medical staff...