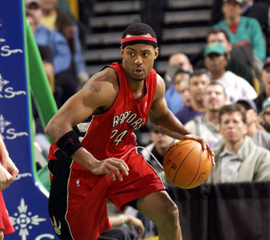 Sure his team was just waxed yesterday in the FIBA Americas final by the US once again (118-81) but with their silver medal finish, his Argentinian squad guaranteed themselves a spot at the Beijing Olympics.

To top this off, Delfino’s club was playing this tournament missing at least five of their best players and still rolled through the tournament tearing through every team except the US. Yes, they’ll be ready in Beijing.

And finally, thanks to the absence of many of these players, this tournament allowed Delfino to take center stage. He scored only nine points against the US but for the tournament he averaged almost 14, along with six rebounds and three assists. As we discussed in earlier articles, he did a bit of everything.

He also played some solid defence whenever I had the privilege of watching him and was a regular feature on many of the highlight reels during the tournament thanks to his spastic drives to the basket.

In fact it was during one of his forays to the hoop against Team Canada that I started wondering just how much the Raptors will miss Morris Peterson next season. While Peterson is slightly bigger in stature, he and Delfino have similar games being able to contribute a bit at both ends of the court with Carlos perhaps being the more athletic of the two.

Let’s take a closer look at some numbers for argument’s sake.

Last year, Peterson averaged 8.9 points, 3.3 rebounds, and less than an assist. He shot 43 per cent from the field and 36 per cent from beyond the arc in approximately 21 minutes of action a game.

At first glance it looks like Peterson is the better marksmen, with Delfino being the superior scorer, rebounder and passer.

However put over 48 minutes, the two have much closer numbers than would first appear.

And in the dime dropping area? This is the area with the greatest disparity as Delfino would average about 5 assists with Peterson clocking in at about 2.

So what does this all mean?

But if nothing else, I think fans can look at these numbers and think "hey, good luck in New Orleans Mo, but we’re going to be fine over here!"

Yes, Peterson had a great year in 05-06, but that was on a bad team and last year, it was clear to all Raptors fans that he struggled even when given opportunities. I may be the biggest Mo Pete apologist of them all, but even I felt he came to camp out of shape and just didn’t get back into the groove until the last games of the playoffs when indeed, it was too little, too late.

Delfino already looks to be able to fill in for Peterson in many statistical areas and with more playing time than he had in Detroit, and fresh off a confidence-boosting Americas’ tournament, I fully expect him to be a perfect fit for the Raptors, especially in terms of rebounding. Delfino as mentioned is a smaller player than Peterson, but he looks to have a better knack for hitting the glass and without beating a dead horse here, this is always an area where Toronto could use help.

My one concern is with Delfino’s shooting as in this tournament, he seemed to suffer from some Mike Jamesitis at times.

He, along with Luis Scola, were Argentina’s main scoring options so he perhaps had more of a green light to shoot than others…but sometimes you had to wonder about how quickly he pulled the trigger. And to top this off, Delfino seems to be as streaky a shooter as they come as his percentages from game to game demonstrate.

Eight for 15 versus Panama? Not so bad.

Three for 12 versus Brazil? Hmmmm…

My hope is that as he gets familiar with Sam Mitchell’s play-book (yes, as elaborate as it appears to be) Delfino will pick and choose his shots and use his "get to the basket" skills to establish his longer-range game.

If he can do this, Raptors fans will once again be applauding another Bryan Colangelo move once again and images of Morris Peterson circus-shots and buzzer-beaters will probably fade off into the distance.

Will Garbs be draining shots like these for Spain?

According to sources however, the Raptors have emphasized that they’d prefer if Garbajosa sat these out to complete the rehabilitation on his injured left leg, and that surgery would be the proper means of making sure he was ready to go this upcoming season for Toronto.

Garbajosa seems to disagree however and the Spanish doctors he’s been dealing with have apparently informed him that his injury can be treated by non-surgical means.

And with the help of reportedly one of "the most expensive premiums in the history of European basketball," it looks like insurance will be covering the Raptors’ investment in case of further injury.

This is a tough issue for sure.

On one hand, Garbajosa is proud player who wants badly to represent his national team, which is hosting this year’s tournament.

On the other, it’s disappointing to fans that a key player for the Raptors is risking further injury to play in a tournament that he doesn’t need to play in. Spain, by virtue of winning last summer’s World Championships, has already qualified for the Beijing Olympics.

From my perspective, I have some concerns. It would be one thing if having Garbajosa on the team was more of a token gesture due to his performance in last summer’s World’s which won his team the title, but based on Garbs’ nature, I doubt he’d go through all of this just to sit on the bench.

Because if Garbajosa ends up playing huge minutes or re-injures himself, the biggest insurance policy in the world isn’t going to conjure up another player who can duplicate what he does for Toronto.