Share All sharing options for: Media Watch for September 24, 2007 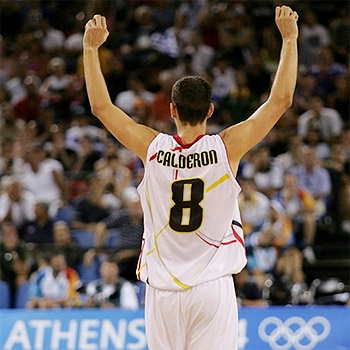 With the season a little over a month away, we're starting to see the NBA previews pour in.

Last weekend, ESPN.com posted their rankings for the Eastern Conference in terms of which teams they felt had the best offseasons.

The Raptors came in at a solid number eight spot, about where I'd rank them too in comparison to the Bostons and Detroits. And after looking at the rankings, it's interesting to note where some of the former East powerhouses Cleveland and Miami rank. It certainly begs the question (especially with Sideshow Varejao looking like he might return to Spain) "what impact will these teams' respective lack of off-season moves have on their upcoming season?"

Last Monday "The Green Bandwagon," a Celtics blog, took a look at the Raptors for their season preview and had this interesting comment:

...if I were a Raptors fan I would be crossing my fingers, hoping Chris Bosh's foot problems are behind him. Speaking of Bosh, I'm not sure where I stand on his nickname - CB4. Yes it is a blatant Chris Rock reference. At the same time Chuck Swirsky allegedly came up with it, which raises several questions. Does Swirsky's involvement automatically devalue the name? Has Swirsky seen or heard of CB4 the movie? And on and on. In case you were wondering I'm not a big fan of the Swirsk.

Had to laugh at that crack.

"...Meanwhile, Toronto's rotation players just combined to play something like 1,000 minutes of international play at Eurobasket. Jorge Garbajosa spent a month jumping around on a broken leg which still may require surgery (training camp starts in two weeks, by the way) and Chris Bosh -- who spent most of a month on the shelf last year with knee problems -- pulled out of Team USA's summer games because of a foot injury. At least Toronto improved in the free agent market by signing a guy who does one thing well (and everything else horribly) and has had one good season his entire career (said good season resulted in a whopping PER of 13.9) to a long-term deal. If that's not responsible team-building, I don't know what is."

However it would indeed be foolish to say that Raptors' fans shouldn't be at all concerned about the amount of wear and tear half of their team has had this off-season. Yes the timing is right to get into game-shape and ready for training camps...however there's a big difference between segmented off-season training and all-out meaningful games with players laying it all on the line.

Jose Calderon will be one of the players monitored the closest concerning those who played in international competition this off-season. He was stellar for Spain and is coming into his contract season with the Raptors. How Bryan Colangelo will deal with this will be interesting to say the least. Jose has been improving by leaps and bounds and is already one of the Raptors most sought-after players. Will B.C. ride things out until the new year and then decided whether to try and keep Jose? Or will Jose have played himself into a starting role by then forcing a decision about TJ Ford? This topic will certainly be reappearing numerous times this season.

Finally, an interesting comment from Jason Kidd who recently said that everyone is talking about Boston, but "Toronto is the favorite," Kidd said of last season's Atlantic winner. "Everybody forgets about them. If they can stay healthy, they'll be right there."

Health will indeed be the key and it's something I'm sure we'll start hearing reports about as soon as training camp opens in Europe in a few weeks.