Is The Legomaster Learning Russian?

Share All sharing options for: Is The Legomaster Learning Russian? 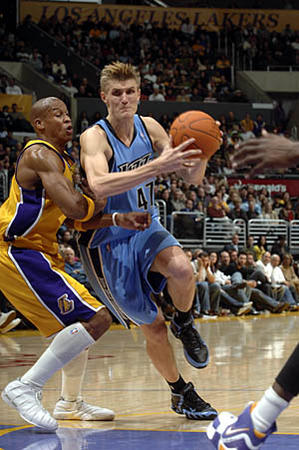 There's been lots of talk on the net as to what the Utah Jazz will do with Andrei Kirilenko, as he's definitely wearing out his welcome in the land of the Mormons.

As a result, the rumour-mill has been running at top speed with speculation as to where he might end up if the Jazz decide to deal him.

Personally, I think a Lamar Odom for Kirilenko trade makes sense for both clubs but what about our beloved Raptors? Is Bryan Colangelo making his way through Tolstoy's works as we speak?

Would Toronto have a shot at Kirilenko?

When you run the numbers, it doesn't look like it.

As one of our readers put it, there aren't a lot of options for Toronto. Financially, taking on a mammoth contract of Kirilenko's size means the Raptors would have to get rid of approximately $13 million in salary. And we all know, to get to that level that means Rasho would have to go.

Otherwise, it would be Bosh (which the Raptors would never do) or perhaps Andrea Bargnani, who has a decent size salary and whose talent would be an enticement.

The other option of course would be TJ Ford, who with his new salary would be a good starting point in any deal for AK. However since the Jazz already have their franchise point guard in Deron Williams, I can't see them wanting TJ.

So who does that leave us with besides Rasho?

Delfino's salary is too small to be a major piece in a deal and Jason Kapono can't be dealt until December since he was a newly signed free-agent.

So back to Rasho we go.

The deal that works and might make some sense is AK47 and Ronnie Brewer for Rasho, Jorge and Juan Dixon or Joey Graham.

The problem is, I'm not sure why Utah would want Rasho as they are already such a good rebounding team...and have a versatile center combo of Jarron Collins and Mehmet Okur. The deal could be arranged so Collins would come back to Toronto and there are various other small permutations of course that could present themselves. But the bottom line right now is that the planets would need to be in alignment for a deal between these two clubs to work.

However, there is a side-piece to all of this.

If cutting salary and getting something in return for Kirilenko is Utah's main goal, than maybe Jazz management could be convinced.

Utah has only 13 players on their payroll at present, want to win now, and don't have much use for a Ronnie Brewer, or maybe a Morris Almond for that matter. So they could do a three for two deal like the one mentioned above and not suffer for roster space.

In addition, Toronto also has a $555,000 trade exception that perhaps Utah would want to clear more room for Deron Williams, who is due for a new deal next season.

In fact Deron Williams' looming contract situation might be that extra push Sloan and co. need to cut salary. Williams' and Carlos Boozer are obviously the core of the team going forward so to try and make Deron a Jazz member for life, Kirilenko may have to go.

So maybe taking on a prospect in Graham, a serviceable big in Rasho, and a glue guy to replace AK47 (and probably a player Jerry Sloan would love) in Garbajosa would be enough if Utah fears it will lose Kirilenko all together.

Reports out of Utah today are making it sound more and more like Kirilenko would prefer to return to Russia to finish his career. If that's the case, Utah might feel its hand is forced, look to get something in return, and let whoever acquires Kirilenko worry about him leaving for Mother Russia.

I think this would be Toronto's only shot.

And it's tough because it's hard not to see AK47 as being the missing piece for the Raptors at the 3/4 spot.

He doesn't need the ball to score, is one of the league's best defenders, can score from inside and out and would look great between the likes of Anthony Parker and Chris Bosh in terms of skill set.

But that's as much as I'm going to say to get my hopes up.

Because while it looks like Andrei might not in a Jazz uniform next season, I highly doubt he will be in a Raptors one either...