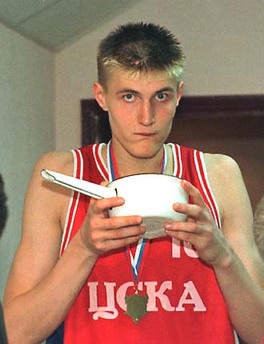 So all those who picked Russia to win the tournament raise your hand.

Yup, that’s what I thought.

In a stunning upset the Russian squad led my none other than Andrei Kirilenko beat the Spanish powerhouse 60-59 when Pau Gasol couldn’t get the games final shot to drop.

Make no mistake, this is a huge event in European basketball circles and the world is taking note. If you read Chris Sheridan’s piece on ESPN you get a sense of how shocking this upset really is. The Russia team, in a story of David and Goliath, came away with it’s first Euoleague title in 22 years beating the Spanish squad in Spain. The loss for the Spanish squad must feel very similar to what the Mavs felt when they lost to Miami two years back. A huge sense of disappointment and a job left unfinished. Hopefully Calderon and Garbo look to take out their frustration and disappointment on the court this season.

For Raps fans the tournament was a solid one and has to be looked at as a positive experience. Perhaps the best thing was that Garbo managed to lace them up, did not re-injure himself and showed that he is ready to get back to playing. In fact Sam Mitchell has to love the fact that all of the Raps participants in this tournament are already in game shape. Sure some guys played better than others but all the guys should come to camp in top conditioning.

One this is for sure, the Olympics will be very entertaining and should produce one of the best international tournaments of all time.
Now, on to the Knicks.

When we looked at the Celtics, Nets the moral of the story is really that there is no better time than the present. For the 76ers they are building for the future. For the Knicks? This summer Isiah knew he was on the hot seat and as a result has decided to go "All-In".

The thing is Thomas didn’t really have a choice when he decided to bring another problem child into the locker-room (let alone NYC). Why? Randolph produces. The reality of the situation is that the Knicks have been the laughing stock of the league for a number of years now and the "mecca" of basketball has slowly fallen off the map. Dealing with heavy criticism, and even a law-suit, Thomas need to make a bold move and a bold move it is. The money, of course, is really of no issue. Thomas has eagerly spent James Dolan’s cash for years clearly adhering to the principles of the Yankees and Red Sox…."A championship is just another dollar away."

Unfortunately for Mr. Dolan this isn’t baseball.
Unlike "America’s Game", winning basketball depends more on chemistry and character than the number of dollars spent. Undoubtedly money matters (just ask Charlotte Bobcats fans), but team chemistry and an ability to play together means more on the court than on the baseball diamond. Baseball, at its root, is a game of numbers and although basketball has it’s fair share of stat junkies (your truly included) sometimes the numbers just don’t add up.

Let’s throw some stats out there:

On paper there may be no better looking team in the NBA. A point guard that can score and shares the ball (albeit not a league leader). A shooting guard that can score and does a bit of everything. A SF that contributes both offensively and on the glass. Last but not least, a very strong font-court that features a consistent double-double threat at the PF position and a centre who is more than serviceable on the offensive end, shoots a high percentage and is a decent rebounder (although the rebounding numbers leave a little to be desired). Seems like a solid base….

On top of the numbers one thing the Knicks do have in their favour this year is a nice bench with a variety of skills. Jones and Robinson can bring some offensive spark, Jeffries can help on the defensive end, Lee and Balkman are great energy guys who can really hustle and rebound, Chandler, Nichols, Collins and Morris are nice young players and Jerome James, should the Knicks ever find themselves in a hot-dog eating contest against Joey Chestnut or Takeru Kobayashi will gladly step-up. Perhaps the biggest flaw on this team from a skill standpoint is lack of shooting, but from an overall standpoint the biggest issue will likely be chemistry and finding an identity. The biggest question for NY entering the season is whether the sum total of the above will result in more wins that losses.

Once you add the names Marbury, Crawford, Richardson, Randolph and Curry to the stats above the answer almost automatically becomes "doubtful". This cast of characters is something a Broadway director would love to have in producing the next great drama. Marbury seems more concerned about playing Robin Hood with his new shoe line and planning his "second career" in Europe than figuring out how to win. Nate Robinson despite having a solid summer league needs to kick the small man syndrome and learn to play under control before concerning himself with who he has left to dunk on. David Lee must be planning his exodus after playing his heart out only to see Thomas bring in someone to replace him in the starting line-up and no-one has seen Eddy Curry since Pizza Hut introduced it’s on-line ordering system.

In all seriousness it’s not all bad for the Knicks and there’s no telling what could happen. With Thomas roaming the sidelines with so much at stake he has no option other than to find a way to maximize the talent he has and to create a system where everyone is happy (and no that system cannot involve adding a second ball to the game play). He needs to find something that each player can buy into. The Knicks have to start winning. The heat is on.

Even if the team doesn’t gel Knicks fans have to like what Thomas has recently done in the draft. True to form Thomas has done an above average job on draft night (despite initial reactions) and has started to fill the roster with young and talented, albeit lesser known players, many of them listed above. None of them have "superstar" written on them but they have really helped deepen the bench. Of course it is not like the Knicks roster is all that old either as most of their core players are all under the age of 27.

Is this the man to lead the Knicks?

After the draft we talked about the addition of Zack Randolph and how this works out is anyone’s guess. There’s no denying him the individual success in the Western Conference and it is plausible that Zack has career numbers in the big apple. I have no doubt he will make his presence felt in the Atlantic. His "presence" may be felt more on CB4’s body than anywhere else. Randolph is a bruiser and although the hype as of late has been on the upcoming Garnett-Bosh match-ups, it is this one that interests me the most. Bosh and KG have very similar skills sets but it is against the bigger, tougher players that Bosh needs to prove himself. From a sheer size standpoint the front-court of Curry and Randolph out-bodies and out-weighs Bargs and Bosh by a sizeable amount. No it is not heavyweight boxing, but the Raps front-court is going to have their hands full and will have to show a new and higher level of toughness in order to be successful this season.

The biggest advantage the Raps have over the Knicks is chemistry. Although less dollars are being spent by MLSE than Cablevision it’s a safe bet that things will work out better for the more frugal of the two. Colangelo has taken the time to "construct" a team. Thomas, on the flip side, has generally tried to fit a square peg into a round hole. I for one don’t think that victories against the Knicks this season will be easy. The Raps can’t just bring a knife to a gun fight. The Knicks are going to play tough and throw their weight around. The Raps are going to need to respond in kind.

The Knicks are really a wild card. Talent wise they could and should make the playoffs. Fighting for the eight spot seems a little more realistic. If they can piece it together there could be another team in the Atlantic trying to grab the Raps crown….but as a betting man I’d say they end up in a similar position as the 76ers by the end of the year – on the outside looking in.