Did We Draft the Wrong Guy?

Share All sharing options for: Did We Draft the Wrong Guy? 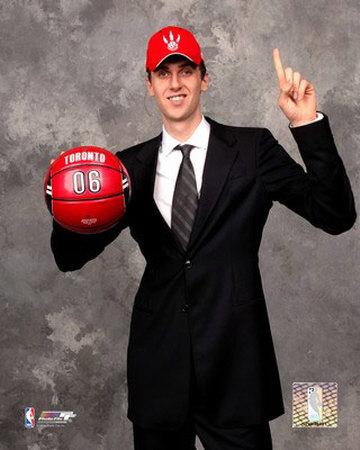 After losses yesterday to Russian and Spain respectively, France and Germany find themselves on the outside of the Final Four in Spain, looking in.

A surprising Russian club led by J.R. Holden and Victor Khryapa knocked off France 75 to 71 in a match that featured some ghastly free-throw shooting by the French. France shot 45 per cent (nine for 20) from the line in the game and this proved to be their undoing as Russia now moves on.

And as for Germany, after knocking off Andrea Bargnani and his Italian club, Dirk Diggler scored only 11 points and took only 10 shots in the loss. As Sergi P mentioned in his comments regarding the game, it seemed like Spain was honed-in on Nowitzki the entire match and without Dirk, Germany was overwhelmed in the 83-55 loss.

Today, Lithuania and Croatia meet while Greece plays Slovenia for a shot at the Final Four.

Turning back to Bargnani, there was some interesting discussion regarding his play and potential. His numbers definitely weren't staggering for Italy and his team disappointed many.

In addition, the areas which seemed to need the most improvement, statistically didn't seem to progress and from all acounts Il Mago just didn't seem to be on his A game.

This brings up a few points then.

Was his play more the product of the Italian system?

Have expectations been too high and in fact he's no more than, as one of our readers mentioned, a slightly taller Vladamir Radmonovic? (If that's the case, better keep him away from Mont. Ste. Anne...)

The argument could be made that perhaps his game is more suited to the NBA style of play and that's why he's struggled for Italy...but the flip-side to that is Dirk Nowitzki, a similar player in many regards who's dominated both in the NBA and international competition.

I personally think we need to give the kid some more time however I remain concerned about using him at the 5 so soon next year. Here's a player who's had problems rebounding the ball considering his height and I'm just not convinced that he's ready yet to play 35 minutes a game at that position.

Unfortunately, a sub-par season from Bargnani will of course cause Raptors' fans all sorts of fits and naturally will beg the question "did Toronto make the right choice with the top draft pick?"

In year one it looked like they did but if we see Tyrus Thomas or LaMarcus Aldridge take another big step forward while Il Mago flounders in year two...

For the record I don't think that will occur, however right now in Portland we're seeing a nice example of what might happen if Andrea has a tough season.

It looks like the Trailblazers will be without the services of top pick Greg Oden for the entire 2007-08 season and naturally many are now pulling out the "what if's" and "I told you so's" considering Portland's selection of Oden over Kevin Durant.

And while I still think Durant was a better fit for Portland, there are some interesting things to think about now in this situation.

First of all, it could be the San Antonio Spurs all over again. With Oden hurt, the team will almost assuredly be guaranteed another high lottery pick in a draft potentially filled with stars at the position they need - point guard.

Derrick Rose, OJ Mayo, Eric Gordon, Darren Collison, Ty Lawson...these are all names I expect to be bandied about come draft time and any would look great feeding Oden, Aldridge and Roy.

Like the Spurs, who suffered through an injury plagued 1996-97 season from David Robinson resulting in the top pick and Tim Duncan, the Blazers could end up being a powerhouse in a few years due to Oden's injury!

Blazers' fans are certainly having visions of Bowie and Walton flashing through their heads right now and this case once again emphasizes the importance of good scouting in the draft process. Sure there were no warnings about Oden's knee, but there were plenty of other injury concerns surrounding him. I just find it hard to believe that this whole situation came as a complete surprise and if it did, shame on the Blazers.

Raptors' fans have seen the result of not doing your homework before the draft (ahem, Hoffa) and just how much that can set a club back.

Otherwise there could be a good deal of hand-wringing and "did we draft the wrong guy" going around the Pacific North-West...