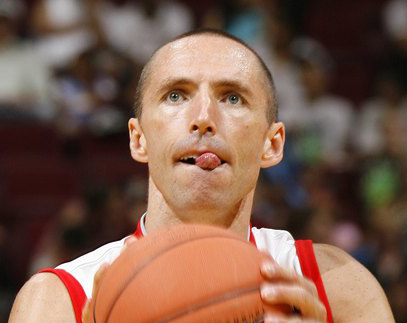 On one hand, Team Canada surpassed the expectations of many (especially considering their international play in the past four years or so) and finished in the top five thus keeping them alive for the upcoming Olympic Games in Beijing.

On the other, the Canadians probably should have been that fourth team along with the US, Argentina and Brazil, who this weekend will be competing for two guaranteed Olympic spots.

At this point based on tournament play, it seems a foregone conclusion that the US and Argentina will in fact be those two clubs as they’ve dominated the competition. However if Brazil can get another 32 point performance out of Leandro Barbosa (he had 32 points and hit four of his seven 3-point attempts in last night’s crushing of Uruguay) then maybe Argentina shouldn’t book their tickets to Beijing just yet.

In any event, two of these four teams will be headed to the next Olympics leaving Canada to play a series of games next summer in order to get the final Olympic spot. Three teams from the Americas qualify for the Olympics each year (as opposed to four from Europe) meaning in all likelihood, Team Canada will have to beat Brazil and Puerto Rico to get in.

And if last night’s game is any indication of their chances, I think things look pretty good.

The Canadians didn’t get any jump in their step until the fourth quarter and then it became a situation where it was "too little, too late." Puerto Rico just didn’t miss from beyond the arc in the third quarter and on the flip side, Canada just kept throwing up bricks as they shot 32 per cent from the field and a horrendous 26 per cent from beyond the arc in the game.

However what was particularly maddening about this game, was that in spite of the poor shooting and getting down by almost 20 points in the third quarter, Team Canada eventually crawled all the way back within two points of Puerto Rico only to blow the game at the free throw line where they shot 50 PER CENT!!!

This was especially egregious near the game’s end as players like Carl English, Samuel Dalembert and Juan Mendez went four for 14 sealing the win for Puerto Rico.
Free-throw shooting was Team Canada’s achilles’ heel all tournament as they shot only 67.5 per cent from the line, the worst percentage of any of the final eight teams and second-worst in the entire tournament with only Panama being beneath them. If Canada wants a shot at an Olympic birth, this is one area of their collective game that they must improve.

Their long-range shooting could use a boost as well and one has to wonder just how much more effective this club would have been offensively had Andy Rautins been healthy.

All in all though, I was extremely happy with Canada’s performance in this tournament. They accomplished their main goal (a top five finish) and with such a young team, look to be on their way in terms of rebuilding the Canadian Men’s Basketball program.

Furthermore, I felt that Leo Rautins did a great job with this group and his recruiting of Samuel Dalembert was instrumental in his team’s top-five finish.

And let’s talk a bit about Dalembert and the NBA implications this finish had.

Much like Steve Nash broke out in international competition and continued his torrid play into the NBA season, Dalembert should get a shot in the arm from this tournament as well. While he wasn’t the main offensive focus like Steve Nash, his defensive play, rebounding (he had 17 in last night’s loss) and even his improved face-up offensive game, should play dividends for the 76ers.

That’s probably bad news for Raptors’ fans to a certain extent but the good news? – how about Carlos Delfino. We’ll be talking more about Delfino on Monday on the site but he’s had a solid tournament with the exception of last night’s loss to the US where he had only seven points on two for 11 shooting. He is however averaging almost 15 points a game, seven rebounds and three assists for Argentina and he could very well add to those numbers this weekend.

Unfortunately we won’t be seeing a rematch of Delfino vs. Canada this weekend but I do anticipate some more matches in the future. The Argentinians will probably get their full "A" team back featuring Fabricio Oberto, Andres Nocionni, Manu Ginobili, etc, etc as they look to continue their international dominance.

And perhaps with Canada’s play this tournament, Jamaal Magloire and a certain two-time MVP might want to reconsider in time for Beijing…