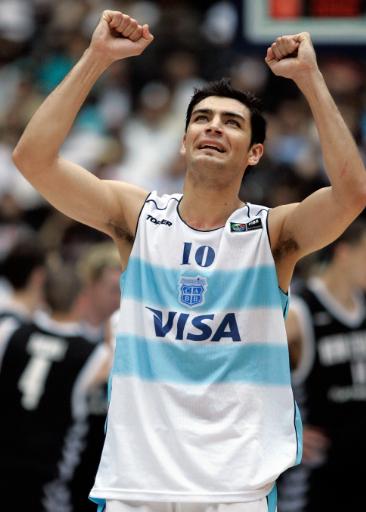 When Carlos Delfino was acquired by the Raptors for a couple second round picks, most fans were pleased with the deal.

Not because fans thought Delfino was the second-coming of Drazen Petrovic...but more because the Legomaster had only given up two second round picks in exchange for his services.

Could Delfino be another integral part of the Raptors international attack?

Well, from his first few seasons in Detroit, it was tough to guesstimate. After all, he had only averaged 4.4 points, 2.4 rebounds and 14.2 minutes a game in his NBA career to date. In addition, there were constant rumours out of Detroit while he was a Piston about his demeanor, ego, and propensity to whine when he didn’t get enough playing time.

However you had to think that if he was complaining, he may have had just cause.

14.2 minutes a game and sitting at times behind the likes of Lindsey Hunter and Ronald Dupree?

It seems like Bryan Colangelo felt that Delfino was being under-utilized by the Pistons, hence the trade, and Carlos’ recent international play seems to be bearing that out.

Yesterday he scored 19 points and grabbed 11 rebounds as his Argentinian club pounded Venezuela 98 to 63. For the tournament (through five games) Delfino is averaging 15.6 points, 7.4 rebounds and 4.2 assists while shooting a blistering 46.7 per cent from beyond the arc.

Yes he’s playing some inferior talent, and the three-point line isn’t as far out as the NBA version, but the stats are impressive nonetheless. Delfino has also shown the ability to get to the line as he went to the line 10 times against Mexico.

These traits are exactly what Raptor fans will be looking for with the departure of Mo Pete and hopefully, Delfino can continue this type of play when he suits up for Toronto next season.

Right now he looks to be the main backup option to either Anthony Parker or Jason Kapono but he may see some time at the 1 as well due to his ball handling abilities.

Of course, Joey Graham and Juan Dixon may have something to say about this but as of now, I expect to see Delfino playing the role of the "assassin off the bench," something that seems to suit his style of play.

What’s most impressed me about Delfino’s play has been his rebounding. Although generously listed at 6-6, Delfino has always shown a knack for getting to the rim using his excellent athletic abilities. And considering the Raptors perennially need help in the rebounding department, Delfino looks to be a nice boost at the 2 or 3 spot for Toronto.

In fact, we may get a closer look at Delfino sooner rather than later as both his Argentinian club and Team Canada appear to be on a collision course at the FIBA Americas tournament.

Team Canada held on for a gritty 95-88 win over Uruguay yesterday to further advance their hopes of a top five finish.

This was a huge win for Canada as Uruguay was the third ranked team in this tournament prior to yesterday’s contest and one of the teams outside of the US and Argentina that Canada needed a solid showing against in order to stay alive for the Olympics.

The Canadians were lead by an unlikely source, power forward Jesse Young, who had 22 points in a little less than 30 minutes of action. And he got a ton of help from the rest of his team-mates as all 10 players had at least four points and continue to show coach Leo Rautins that any one of them is capable of stepping up when needed.

Today Canada’s depth will indeed be put to the test as they face the aforementioned Delfino and his Argentinian team-mates.

I’m not sure Canada has the offensive firepower to compete with Argentina, but if they can keep things close, they may be able to make things interesting, particularly if they can get another solid game from their "bigs."

And even if Team Canada can’t get the W, from a Raptors fans’ perspective, it gives us all a great chance to see just what Delfino can do.

Hopefully Sam Mitchell will be watching somewhere as well...taking notes.